Rock shelters in Central Nevada show archaeological evidence for ancestral Newe seasonal occupation for more than 7,000 years. In 1863 the Treaty of Ruby Valley formally recognized most of Nevada as the Newe (Western Shoshone) Territory. The treaty asked for safe passage through the Newe Territory for US citizens, protection for the Pony Express, and permit mining for gold on their land and future construction of railroads. A century later in 1962, the Newe people filed to reclaim their land, which had never been relinquished or ceded to the United States or to the Euro-American settlers.  In 1979, the Indian Claims Commission awarded a $26 million land claim settlement to the Newe people. The US Supreme Court ruled in 1985 that the Newe land claims were extinguished by this financial settlement. The Newe refused to take the money. Today, the Morey Peak and the surrounding area is within the Newe traditional homelands and remains contested. The ancestral Newe people were documented in the Morey Peak area by the earliest Euro-American explorers.  Jedediah Smith described Newe people in the area in 1827.  The early 20th century antropologist, Julian Steward documented Newe families living in the Hot Creek and Tybo locations and described the lifeways and resources they used.  By this time, however,  their traditional hunting and gathering economy had been permanently disrupted by EuroAmerican settlers, squatters, livestock, and resource extraction.  Despite these disruptions, the Newe continued to follow their traditions and attend gatherings of other Newe People in places like Duckwater, Kawich, and Biabahuna (Little Smoky Valley).

Jedediah Smith exited Hot Creek Canyon and camped near the mouth of Sixmile Canyon in the shadow of Morey Peak on June 10th, 1827.  The following day, June 11, he crossed the Hot Creek Valley toward the northeast and camped in the southern Heart Hills. In both locations he documented interactions with Newe people. Most of the later Euro-American explorers followed and documented routes further north of Smith's 1827 crossing. In 1848, the Treaty of Guadalupe Hidalgo brought an official end to the Mexican-American War (1846-48) and ceded the lands claimed by Mexico in Nevada to the United States. In 1849, Brigham Young proclaimed all the lands of Utah and Nevada as the "State of Desertet." In response, the US Government decreed that the same area as the Territory of Utah. In 1861, the westernmost part of this combined territory (west of the 116th meridian) was recognized as Nevada Territory. Soon after statehood, in 1864, silver was discovered in the Morey mining district in 1865 along the northern edge of the Morey Wilderness Study Area. The Tybo Mining district was organized in 1870 and the smelting of ore required an insatiable appetite for wood and charcoal. The demand for wood led to the numerous charcoal kilns in the area, including along South Six-mile Canyon.  Each set of kilns is estimated to have consumed 4,000 acres of trees over their short life-spans. The rapacious destruction of the pinyon forests the Newe people depended upon most have be unimaginable to these indigenous people. Life in the the Hot Creek mountain was not harmonious, according to Mitchell and Mitchell's Guide to Historic Places in Nye County (1981) the Irish, Cornish, and Europeans hated one another and they all hated Asians.  After the construction of the Trans-Continental Railroad, primarily Chinese workers found employment as wood choppers for the Tybo mining charcoal demands. Apparently an armed posse ordered the Asians out of the district, under the threat of death if they stayed. The first mining boom ended in 1891 and the town remained quiet until 1929 when a floatation mill was installed and ran for 8 years. During its heyday, Tybo was a transportation center, connected to other mining communities throughout Central Nevada by regular stagecoach service. Today, several of these stagecoach stations are still standing in the shadow of Morey Peak. 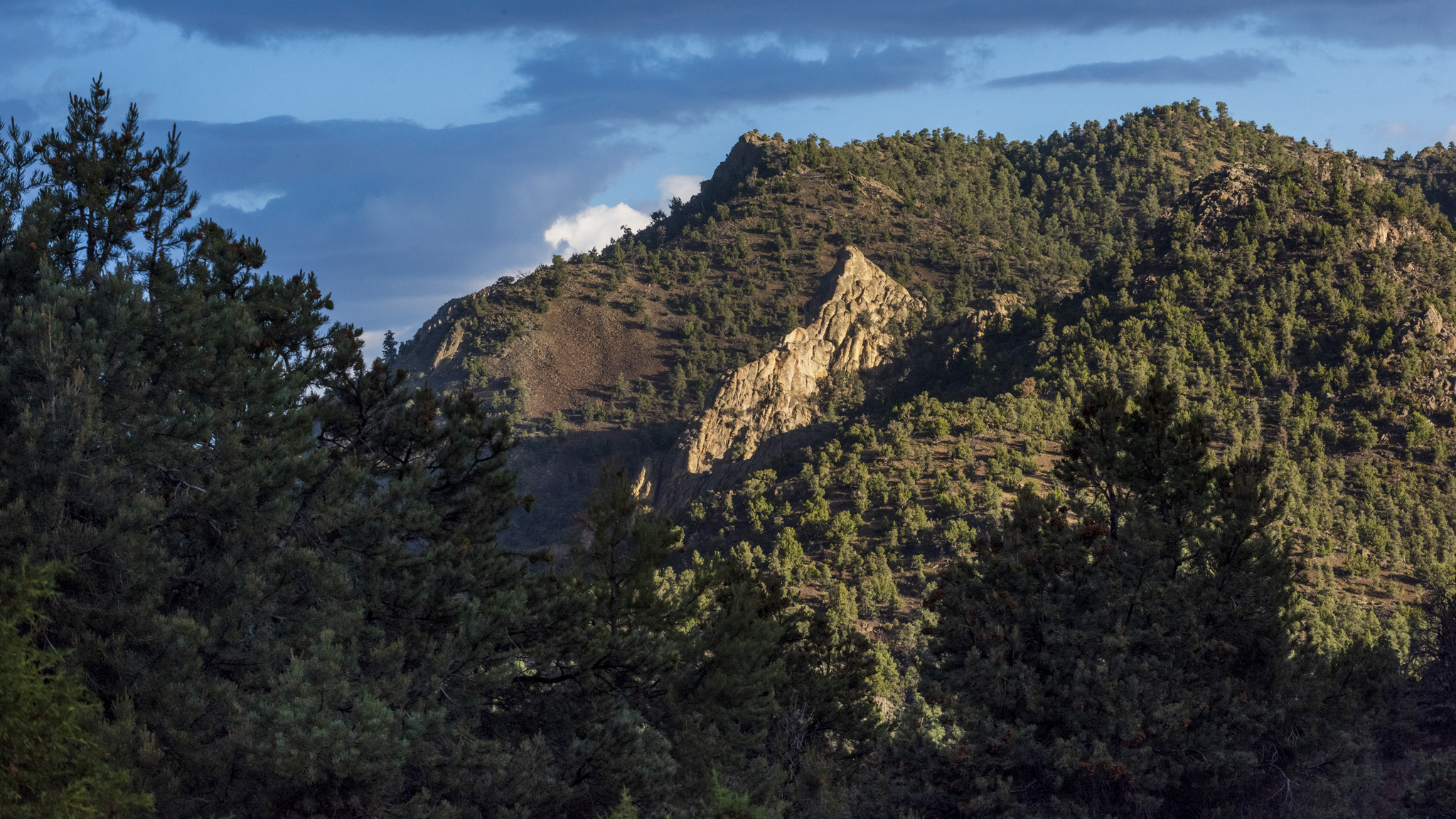 Geology
The Morey area is covered by middle Tertiary silicic volcanic rocks that are mainly ash-flow tuff. The structural geology of Morey is complex due to several types and periods of faulting both prior to and following middle Tertiary volcanism, and also due to the presence of the western and northern margins of two nested cauldrons in the  Morey Peak and Fandango study area. The cauldron margins are marked by high-angle fault contacts between pre-Tertiary rocks and Tertiary volcanic rocks, numerous dikes and small intrusions of rhyolitic to andesitic composition, and the abrupt termination of the tuff of Williams Ridge and Morey Peak. However, the inferred margin of the Morey cauldron may simply be coincident with the edge of the resurged part of the tuff of Williams Ridge and Morey Peak and not actually delineate the cauldron boundary. Numerous high-angle faults that generally trend north to northeast or east-west cut the thrust faults and affect both pre-Tertiary and Tertiary rocks. Many of the north- to northeast-trending faults are probably Basin and Range structures formed during late Cenozoic uplift of the Hot Creek Range.

This complex geological has resulted in the spectacular eastern scarp of Morey Peak and multitude of 10,000-foot summit turrets and formation that comprise the highest terrain of the Wilderness. John Hart in Hiking the Great Basin, describes the top of Morey as "curious beehive shapes" and "a whole cluster of... sugarloaf summits."

Wildlife
Morey Peak supports a healthy population of mule deer and a substantial number of mountain lion haunt the dense stands of trees. Bobcats, coyotes, and badger may be seen occasionally throughout this unit.  Morey Bench along the eastern edge of the area provides critical winter deer habitat for regional herds in Central Nevada from as far away as the Kawich Range, especially during harsh winter seasons. The population has historically increased to as many as 2,000 animals by mid-winter. Pronghorn also frequent the Morey Bench.  Occasional sightings of elk round-out Morey Peak's large animal population. The steep cliffs and deep canyons provide thermals, up-drafts, and nesting sights for a multitude raptors.

Plants
Pinyon and juniper form the most abundant trees of Morey Peak.  Above 8,400 feet limber pine appears and bristlecone pines can be found growing above 9,200 feet up to the summits. Higher canyons feature small riparian stands of aspen, while massive cottonwood trees grow near the mouth of South Sixmile Canyon.  The rolling uplands alternate between stands of pines, open sage, grass and paint brush meadows, craggy rock formations, and dense thickets of mountain mahogany on south and west facing slopes.  Blue iris and and shooting stars can be found seasonally. 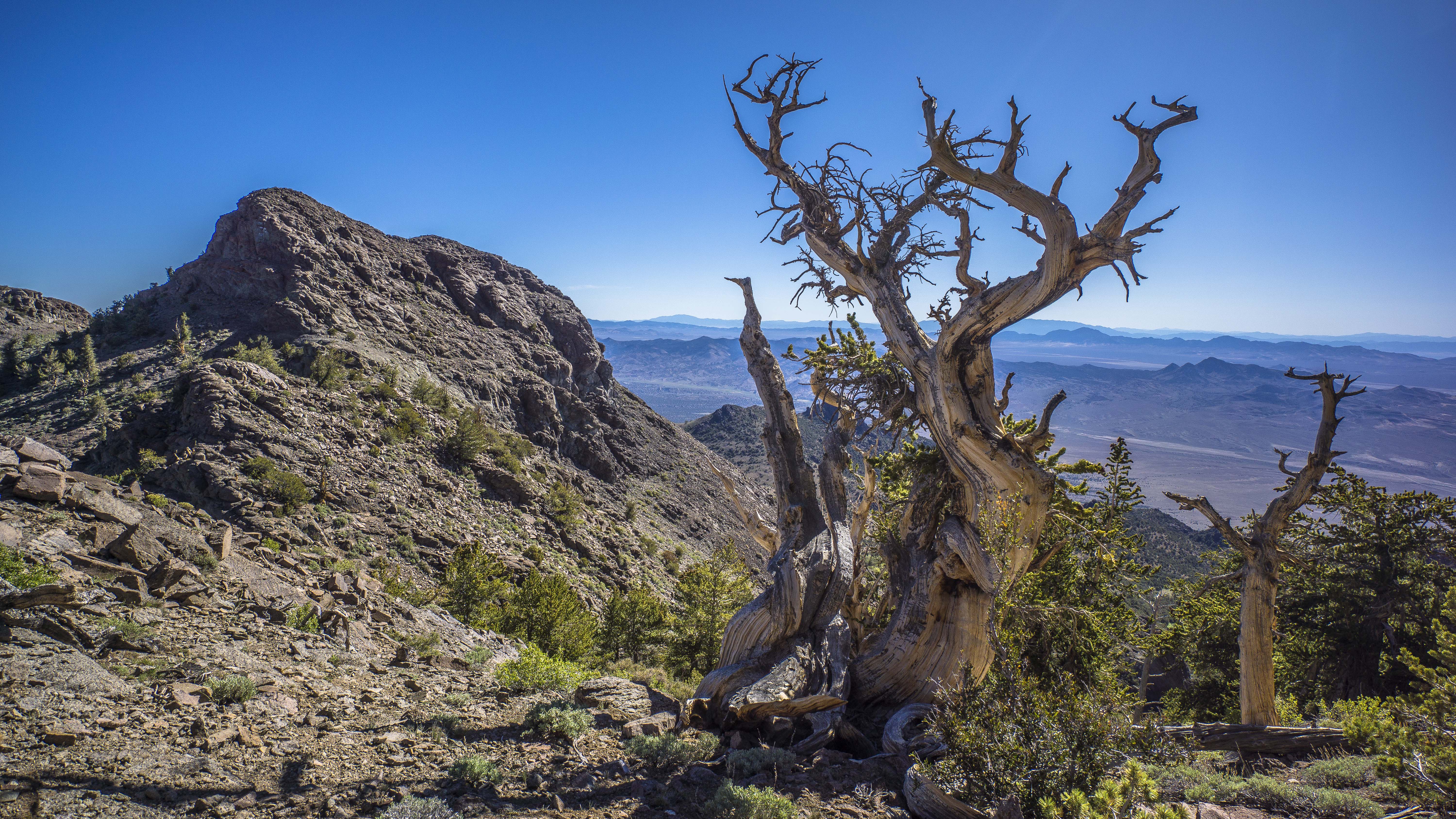