About Us
What We Do

Friends Board of Directors Again Recognized for 100% Giving

Friends is pleased and proud to once again receive the 100% Giving Board Award from the Community of Foundation of Northern Nevada for 2022.

“A Board member’s role goes beyond their time – it means believing in the cause you are working towards. The 100% Giving Board Award recognizes Board members who understand the impact their organizations are making,” said Foundation CEO Eaton Dunkelberger.

“I am incredibly grateful that all 13 members of our Board of Directors are so generous with both their time and their financial support,” said Executive Director Shaaron Netherton. “Our staff is inspired by the board’s dedication to the work we do every day to help keep Nevada wild.”

The Coalition for Recreational Trails chose the Griffith Peak Trail Rebuild project as the winner of the CRT’s Annual Achievement Award for outstanding use of Recreational Trails Program funds in the Public-Private Partnerships and Access to/Use of Public Lands category.  Learn more and watch the virtual award ceremony here.

The National Wildlife Refuge Association (NWRA) announced that Netherton and Witt are receiving the annual Refuge Advocate of the Year award for their leadership in creating and leading a coalition of organizations opposed to further expansion of the Nellis Test and Training Range into the Refuge. They were nominated for the award by Refuge Complex Manager Kevin DesRoberts.

“It is with great honor that Jose Witt and I were selected by the National Wildlife Refuge Association as Refuge Advocate of the Year,” Netherton said when informed of the award.  “Of course, the progress we made fighting military expansion into the Desert Refuge would not have happened without the support of many organizations, Indigenous community leaders, the Nevada delegation, our state government and all of the individuals who showed up at meetings, wrote letters and signed petitions. Working to protect the Desert Refuge was a team effort and a labor of love and Jose and I are accepting this award for all of them.” 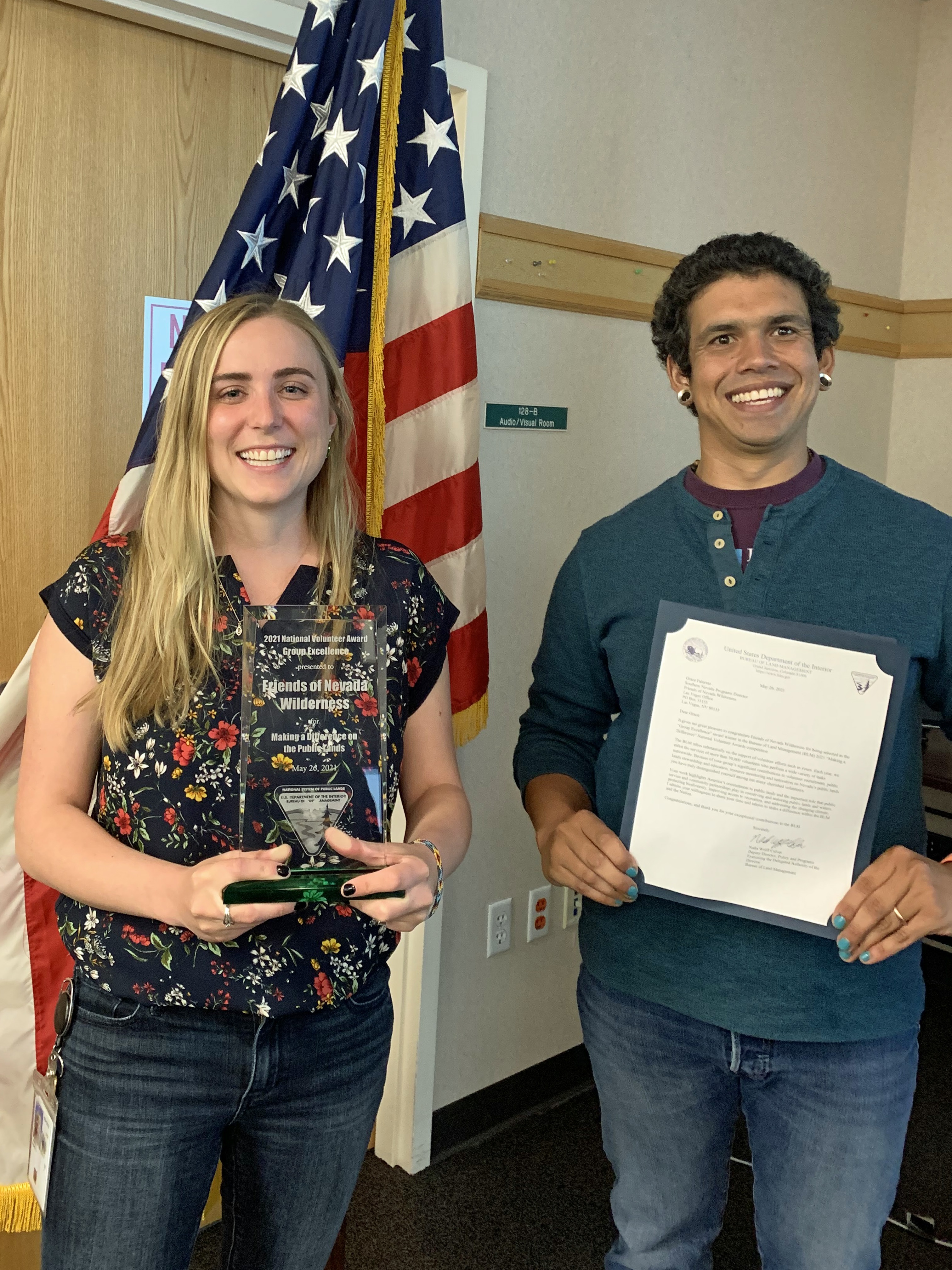 Friends of Nevada Wilderness is proud to accept, on behalf of our amazing volunteers, the 2021 “Group Excellence” award in the Bureau of Land Management’s annual Making  a Difference National Volunteer Award competition. Thanks to the South Nevada BLM district office for nominating us in recognition of our partnership to conserve our wild   public lands and keep them accessible to the public.

Congratulations to the Southern Nevada crew and all of the tireless, passionate volunteers who continue to give back to their public lands.

Southern NV Director Grace Palermo and Stewardship Coordinator Peter Sbraccia accept the award on behalf of Friends and our volunteers.

On September 14, Friends of Nevada Wilderness was honored to receive the Nevada Conservation League’s 2019 Conservation Partner Award for leading efforts to protect the Desert Refuge from further military expansion. According to the Nevada Conservation League, “For several years Friends of Nevada Wilderness has been leading efforts to protect the Desert National Wildlife Refuge from further military expansion. Their continued efforts led to the passage of two resolutions stating the Legislature’s opposition to expansion into the Desert National Wildlife Refuge and lands surrounding the Naval Air Station in Fallon.” 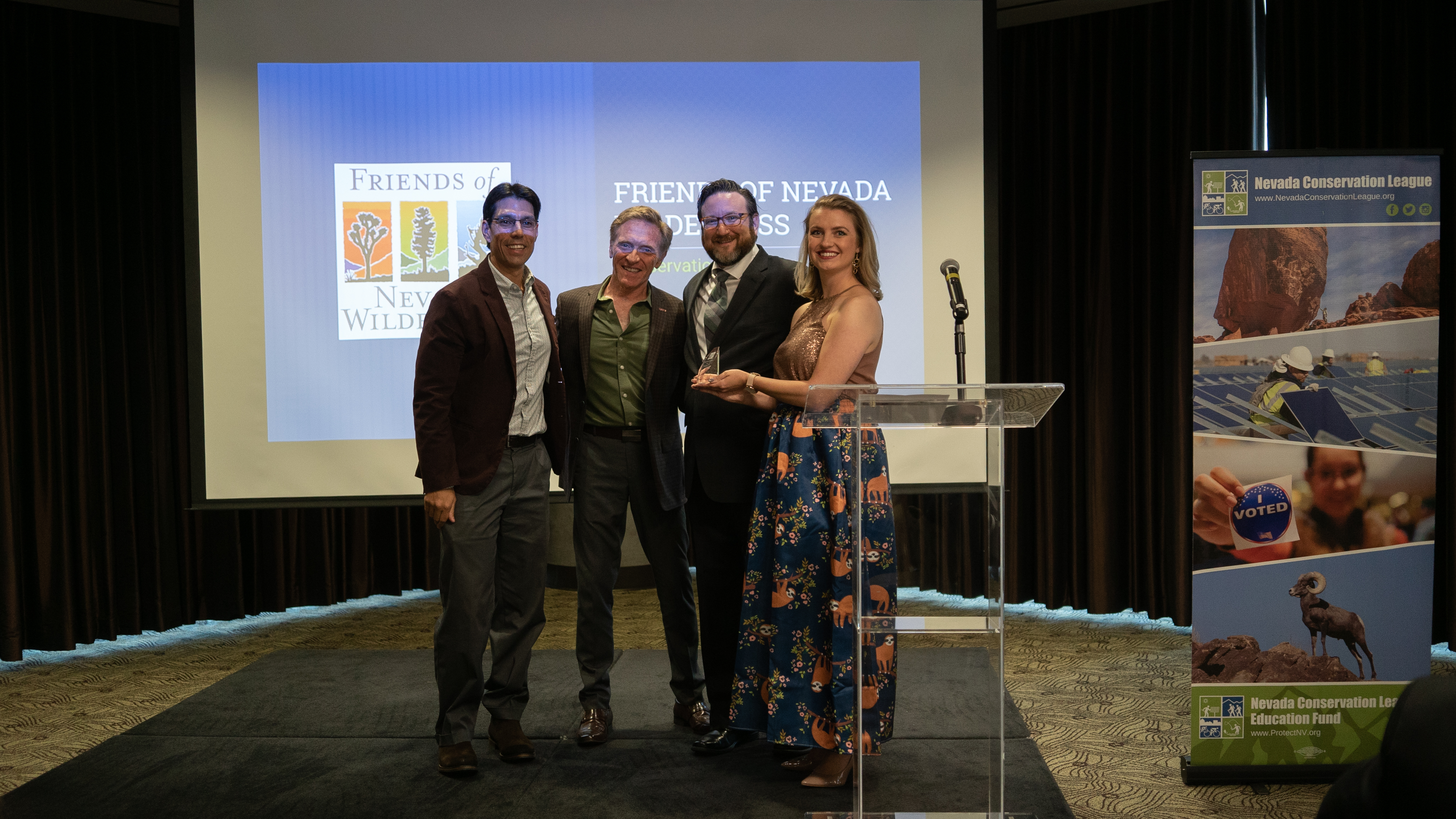 One of the Best Awards Ever

In February, the Southern Nevada staff were honored to receive an award "For Extraordinary Hard Work and Dedication in Keeping Nevada Wild" from the volunteers, presented by rock star volunteer Ron LaPointe.  Ron surprised the team with this award during our annual volunteer appreciation event in southern Nevada, the Wahoo for Wilderness. Given how much we appreciate our volunteers, when they return the favor, it's the best award ever.

Bureau of Land Management's "National Volunteer Group Excellence Award: In May 2017, the Bureau of Land Management awarded Friends of Nevada Wilderness their prestigious "National Volunteer Group Excellence" award stating, "you have made such great strides the past 14 years helping the BLM keep public lands in Nevada beautiful and sustainable. You have helped promote so many great volunteer activities around the Winnemucca District, among many others!" Watch the video of the award ceremony here (33:45).

Congressional Record from Senator Harry Reid: In September of 2016, Senator Harry Reid recognized the work of Nevada conservation champion and Friends of Nevada Wilderness' founding Board Member Marge Sill on the Senate Floor. Senator Reid honored Marge's enduring wilderness legacy in the northern Nevada for the past fifty years. Because of their strong partnership, Senator Reid and Marge Sill directly contributed to the designation of 70 wilderness areas in Nevada.

Wilburforce Conservation Leadership Award: In August 2016, Friends of Nevada Wilderness' Executive Director, Shaaron Netherton, received Wilburforce's Conservation Leadership award in honor of her continued commitment, leadership, and passion for protecting Nevada's public lands. Since 2000, Shaaron has built Friends of Nevada Wilderness from a staff of one to fourteen, initiated a robust stewardship program, and contributed to the designation of countless Nevada wilderness areas.

U.S. Fish and Wildlife Service Certificate of Volunteer Appreciation: April 2014, the U.S. Fish and Wildlife Service and the Department of the Interior presented Friends of Nevada Wilderness with a Certificate of Volunteer Appreciation, acknowledging the contribution of Friends of Nevada Wilderness toward the conservation and management of natural resources.

Senator Harry Reid Certificate of Senatorial Recognition: In March of 2014, Senator Harry Reid awarded Friends of Nevada Wilderness with a Certificate of Senatorial Recognition to honor Friends of Nevada Wilderness' 30th Anniversary as an organization and our commitment to protecting and preserving wilderness in northern Nevada.

Senator Dean Heller Certificate of Senatorial Recognition: In March of 2014, Senator Dean Heller awarded Friends of Nevada Wilderness with a Certificate of Senatorial Recognition to honor Friends of Nevada Wilderness' 30th Anniversary as an organization and our commitment to protecting and preserving wilderness in northern Nevada.

Bureau of Land Management Winnemucca District Certificate of Appreciation: In August of 2013, the Bureau of Land Management Winnemucca District Office awarded Friends of Nevada Wilderness a Certificate of Appreciation to honor the "hard work, dedication, and commitment to excellence in the planning, organizing, and success of the 2013 Black Rock Rendezvous."

Bureau of Land Management's Making a Difference National Volunteer Award: In spring of 2012, Friends of Nevada Wilderness' Stewardship Director, Pat Bruce, received the BLM's prestigious Making a Difference National Volunteer Award. “It’s all the work of the volunteers that make this possible,” said Pat. “I want to accept this award on behalf of everyone who has volunteered on Nevada's public lands.”

Department of the Interior's Partner in Conservation Award: In 2009, the Department of the Interior awarded Friends of Nevada Wilderness with the Partner in Conservation award to celebrate our work in helping to further the mission of DOI from recruiting and managing a large volunteer force for on-the-ground wilderness stewardship to program support. In 2009, Friends of Nevada Wilderness in partnership with a variety of other organizations helped plan, recruit and manage volunteers for 18 separate projects with the BLM and 2 projects with the Fish and Wildlife Service with over $100,000 on in kind service contributed towards the Department of Interior.

Bob Marshall Award for Group Champion of Wilderness Stewardship: Friends of Nevada Wilderness received the Forest Service’s highest wilderness stewardship award for an organization. This huge achievement was ONLY possible because of the thousands of hours that YOU, our dedicated volunteers give to Nevada’s wild places. This award is given to only one organization each year recognizing exemplary leadership and outstanding accomplishments in wilderness stewardship as well as actively perpetuating high quality wilderness for present and future generations and going the extra mile to preserve the wilderness resource.

Soroptimist International Sierra Nevada Region Certificate of Appreciation: The Sierra Nevada Region of Soroptimist International presented Friends of Nevada Wilderness with a Certificate of Appreciation in April 2008 to recognize Friends of Nevada Wilderness as an organization serving the best interest of women and girls.