What We Do
Our Accomplishements 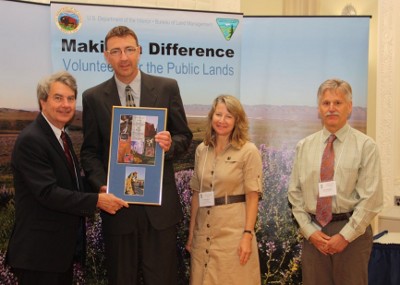 “It's all the work of the volunteers that make this possible,” said Pat. “I want to accept this award on behalf of everyone who has volunteered in Nevada's public lands.”

Pat was honored for his extraordinary efforts to make the Black Rock desert a healthier place for plants, animals and people. He has led many volunteer work projects to accomplish important goals. Here is a sampling:

Also (and not mentioned in his award nomination), Pat takes great care of his volunteers start-to-finish on every project trip — especially with his Dutch oven meals, which usually take top honors in highly-competitive cookoffs.

Congratulations Pat nobody has ever deserved this award more than you. Thank you for your passion and hard work — the results are written all across Nevada's wild places.

Read the BLM's nomination - Pat's many accomplishments on the Black Rock are highlighted in this document (PDF). 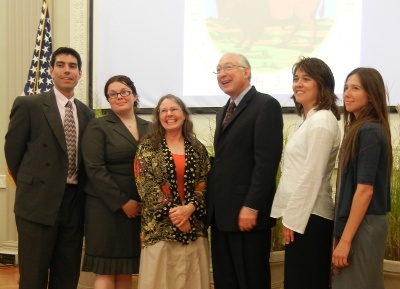 Friends of Nevada Wilderness was awarded the Department of Interior's Partners in Conservation Award in Washington DC in September 2011. This award recognizes Friends' on-the-ground volunteer stewardship projects that helped wildlands and wildlife habitat on both the Desert National Wildlife Refuge and BLM lands in Nevada.

Our interagency partnership in southern Nevada is a model for the entire country, and “we are excited to be making a difference for wilderness,” says Kurt Kuznicki, Friends' Southern Nevada Director.

We met with Secretary of Interior, Ken Salazar, for the award program. This award honors all the great work that our volunteers do in Nevada. “This award is for all of you,” says Shaaron Netherton, Friends' Executive Director.

In November 2010, Friends of Nevada Wilderness was honored with the Golden Pinecone Award for a nonprofit organization, presented by Nevada EcoNet.

Nevada EcoNet noted that:
Friends of Nevada Wilderness has played a major role in passing federal legislation to protect more than 2.5 million acres of new wilderness designation in Nevada since 2000. The Friends have an excellent stewardship program to protect and restore the designated wilderness areas on public lands. They organize weekend work projects to provide needed work on wilderness areas throughout the state.

It is the participation of many dedicated wilderness supporters and the hard work of hundreds of volunteers that make it possible to protect and restore the wild places of Nevada. “Thank you” to all who help make this work possible. 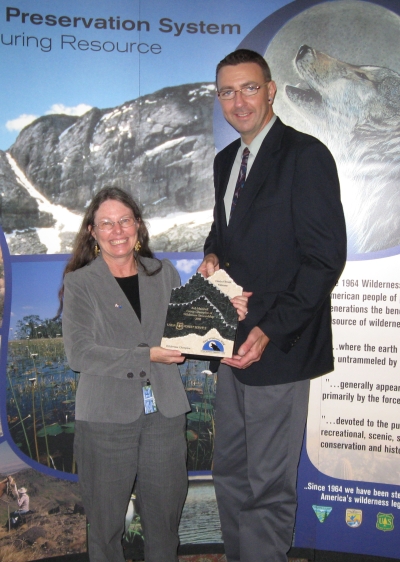 In October 2008, Friends of Nevada Wilderness was presented with the Forest Service' prestigious Bob Marshall Group
Champion of Wilderness Stewardship Award. Winning this award was only possible because of the extraordinary accomplishments, dedication and support of our wonderful volunteers and members on behalf of Nevada's wild places.

The Bob Marshall award recognizes the success of Friends wilderness stewardship efforts. With the help of many, many people, we have built the nation's best statewide program to protect our wild places. Here is what Ed Monnig, Humboldt-Toiyabe National Forest Supervisor had to say (in a national press release) about Friends winning this award:

“Our forest has accomplished a tremendous amount of work in our 23 wildernesses, that's over 1.2 million acres, because of our partnership with Friends, and their dedicated efforts. This land is your land, and each and every one of us are benefiting from Friends' commitment to these special areas.”

Here is some of what Friends of Nevada Wilderness did to deserve this recognition. Every year, hundreds of volunteers invest thousands of hours in labor to accomplish gritty jobs like pulling invasive weeds, repairing illegal OHV damage, removing graffiti, rehabilitating dune systems, and dragging out abandoned barbwire fencing. And because of all the hard work, the wilderness quality of many of Nevada's wild places has been improved — helping assure the future of these important areas.

Over the past several years, Friends of Nevada Wilderness has created a nationally-recognized, state-wide wilderness stewardship program that connects volunteers to wildlands that need help to maintain their wildness.

Since 1984, Friends of Nevada Wilderness has successfully led efforts to protect over 3 million acres of wilderness: Nevada’s wild heritage. 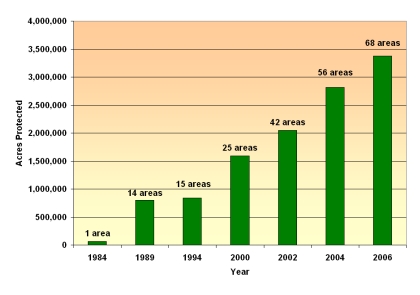 With the passage of the White Pine County Conservation, Recreation and Development Act of 2006, Nevada exceeded 3 million acres of congressionally-designated wilderness. This comprises only 4.8% of the state's area. 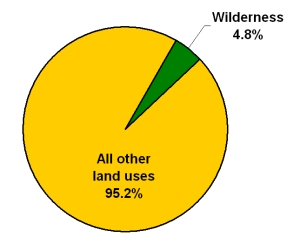