Archaeological evidence suggests that the first Native inhabitation of the greater Gates of the Grand Canyon region began over 11,500 years ago. These earliest peoples were believed to be associated with hunting the remnants of Pleistocene megafauna in conditions that were slightly cooler and wetter than the climate we know today. Gypsum Cave, adjacent to Las Vegas, has tantalizing evidence for extinct ground sloths, which became extinct 11,060 to 11,490 years BP (Before Present). A solid date of 9,280 years BP was found on a rare, early basketry fragment found within the cave, placing early human use at least to this date. Tule springs also offers evidence for dates of human use of the region dating back to 11,000 years BP. Regardless of the exact age of the first human use and habitation, the archeological record shows a continuity of use of the area as cultures and affiliations shifted over countless generations. Although the Gates of the Grand Canyon today is affiliated as traditional lands for two primary peoples, the Southern Paiute and the Hualapai, Tribal groups ranging as far as Utah and New Mexico consider the area as historically significant because of their links with the Virgin River Ancestral Puebloan period, which was associated with the structures and cultivation of maize and other crops adjacent to the Gates of the Grand Canyon in the Virgin and Moapa valleys.

The Hualapai people conceptualize the Colorado River as a giant lizard, running along the edge of their territory. They call the mid-stream of Colorado River “Haitat,” which roughly translates as the backbone of the lizard. The Gates of the Grand Canyon are infused with objects and locations of cultural significance for Native Americans. Please respect all artifacts and inscriptions within the area. 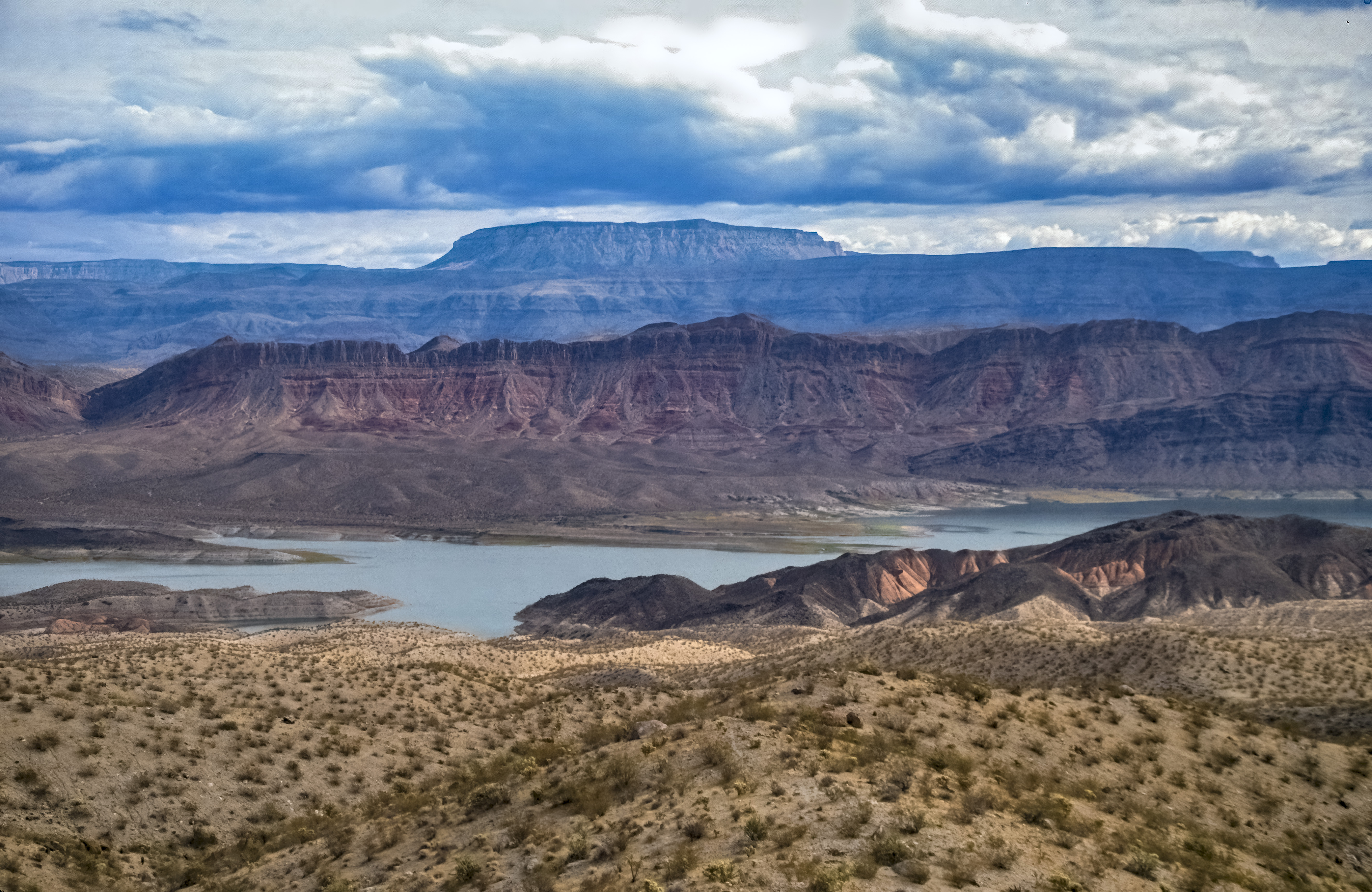 Historic use of southern Nevada began in 1826 with blazing of the Old Spanish Trail by American and Mexican explorers. The Gates of the Grand Canyon were ignored by these explorers because the area was too rugged for travel combined with the ultimate need to confront crossing the unpredictable Colorado River, perhaps multiple times, as it snaked through it's maze of inaccessible canyons. In 1865, Mormons established a permanent community called St. Thomas immediately across from the Gates of the Grand Canyon along the Virgin River for the explicit purpose of growing cotton in the Moapa Valley. Further exploration of the Gates of the Grand Canyon were limited to sporadic prospecting thoughout the 19th century, including Daniel Bonelli's discovery of mica in the area in 1873. Scanlon established his ferry across the Colorado River in 1881 to serve the needs of early settlers and ranchers in moving goods and livestock from the lower Colorado River up into the Arizona Strip. From the the north, access to the ferry was originally via Grand  Wash.  Scanlon created the precarious Scanlon Dugway road from the north side of the Colorado River up into the Gold Butte region sometime before 1893.  Although John Wesley Powell's expedition through the Grand Canyon was in 1869, his descriptions and discoveries would not enter into the American imagination until he revised and reissued his report in 1895 and retitled it: The Exploration of the Colorado River and Its Canyons. 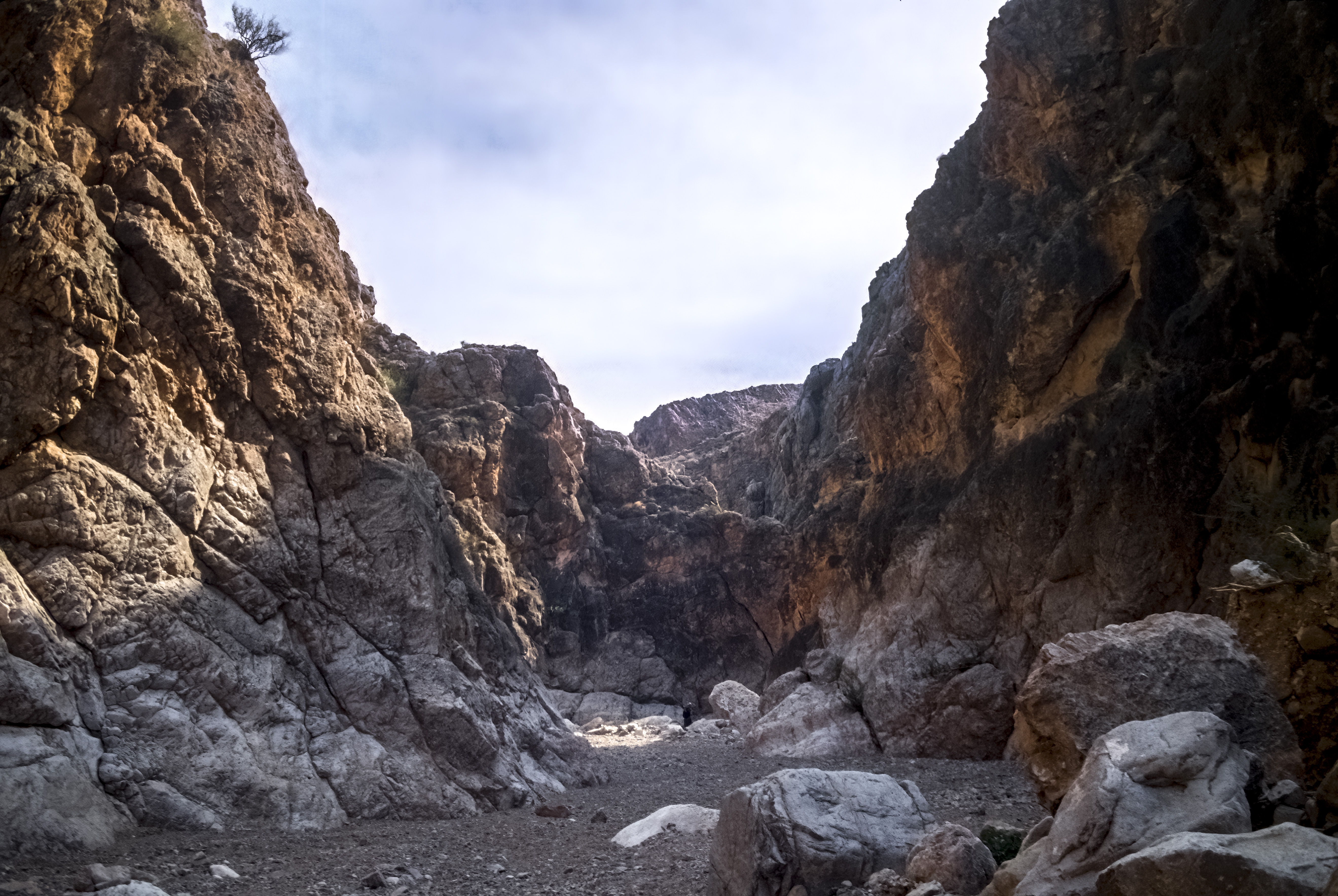 Wildlife
The  Gates of the Grand Canyon provides habitat for a diversity reptiles including lizards (including the chuckwalla), snakes, and the threatened desert tortoise.  Bird species include Gambel's quail, raven, desert sparrow, roadrunner, horned lark, and cactus and rock wrens. Raptors, although not common, can be sighted within the area. From small to large, the mammals of the region include bats, rodents, black-tail jackrabbits, desert cotton-tail, kit fox, coyote, badger, and perhaps even an occasional bobcat.  At the highest elevation, a transient desert bighorn sheep may be observed.

Plants
Nearly the entirety of the Nevada portion of the Gates of the Grand Canyon is characterized by the creosote bush plant community. The community generally dominates the landscape below 3,500 feet, but climbs much higher in arid areas of south-facing slopes, which describes most of the Nevada portion of the Gates of the Grand Canyon. This area presents overall sparse vegetation with creosote bush and burro bush as the primary species.  Additional species include Mohave yucca, bur-sage, desert holly, Mormon tea, barrel cactus, prickly pear cactus, cholla cactus, indigo bush, saltbush, brittlebush, ratany, buckwheat , and numerous sunflowers, mustards, and legumes. Rare areas in the endangered bearpoppy can also be found within the Gates of the Grand Canyon.  After fortuitous precipitation the creosote bush desert community can bloom with stunning displays of plants such as wild heliotrope, globe mallow, plantain, monkey flower, desert marigold, sunray, fiddleneck, poppy, purple aster, and primroses. Many of these plants hide dormant in the soils for years waiting for the right combination of season and precipitation to flower and bloom. the northern most portions of the Scanlon Wash and Hell's Kitchen units rise to elevations where the Joshua tree/blackbrush plant community has established.  Similar to the creosote community, this community includes the iconic Joshua tree along with a wider diversity of cholla, beavertail cactus, agave and a substantial increase in grasses. The density, mix, and growth habit of these plant communities shift with changes in soils, slope steepness, the directional aspect of slopes, and the proximity of the communities to the increased potential of water adjacent to dry washes.