The Timbisha Shoshone people have lived and thrived in Death Valley for thousands of years. Traditional use of Death Valley was seasonal in nature, following the warming temperatures up into the higher elevations and settling back down in the warm valley floors during the coldest months of the year. The Timbisha Shoshone have on-going traditions of tending springs and water sources to encourage the growth of the native plants they depended on for food and medicine. Historically, the Timbisha people used rouge paint in ceremonies that symbolized from where the tribe got its strength: the red earth. The word Timbisha means “red rock face paint” in the Shoshone language.

The first recorded history of this area begins in the 1880’s with the establishment of Lime Camp, at a limestone outcrop on the northern end of the Grapevine Mountains. This camp served a very small group of prospectors and a few ranchers in the area. With the discovery of gold and silver in Tonopah and Goldfield, prospectors returned to Lime Camp in droves. There is no doubt that these prospectors did not explore every inch of the Grapevine Mountains over the next 3 decades. In 1902 silver was discovered in the area, and the old camp was revived and renamed Hornsilver, a common name for a particular silver mineral. The mine was never very productive, but the community persisted and established the Hornsilver post office in 1908. Gold was discovered in the mine 1927 and the post office and the community name was changed to Gold Point in 1932. The town persists today with a permanent population that hovers at about seven individuals. Just to the east of the Grapevine Mountains, two competing railroad companies, the Bullfrog Goldfield Railroad and the Las Vegas & Tonopah Railroad laid parallel tracks across Bonnie Claire Flats. These railroads operated in changing configurations of ownerships until both track right-of-ways were abandoned in 1927. 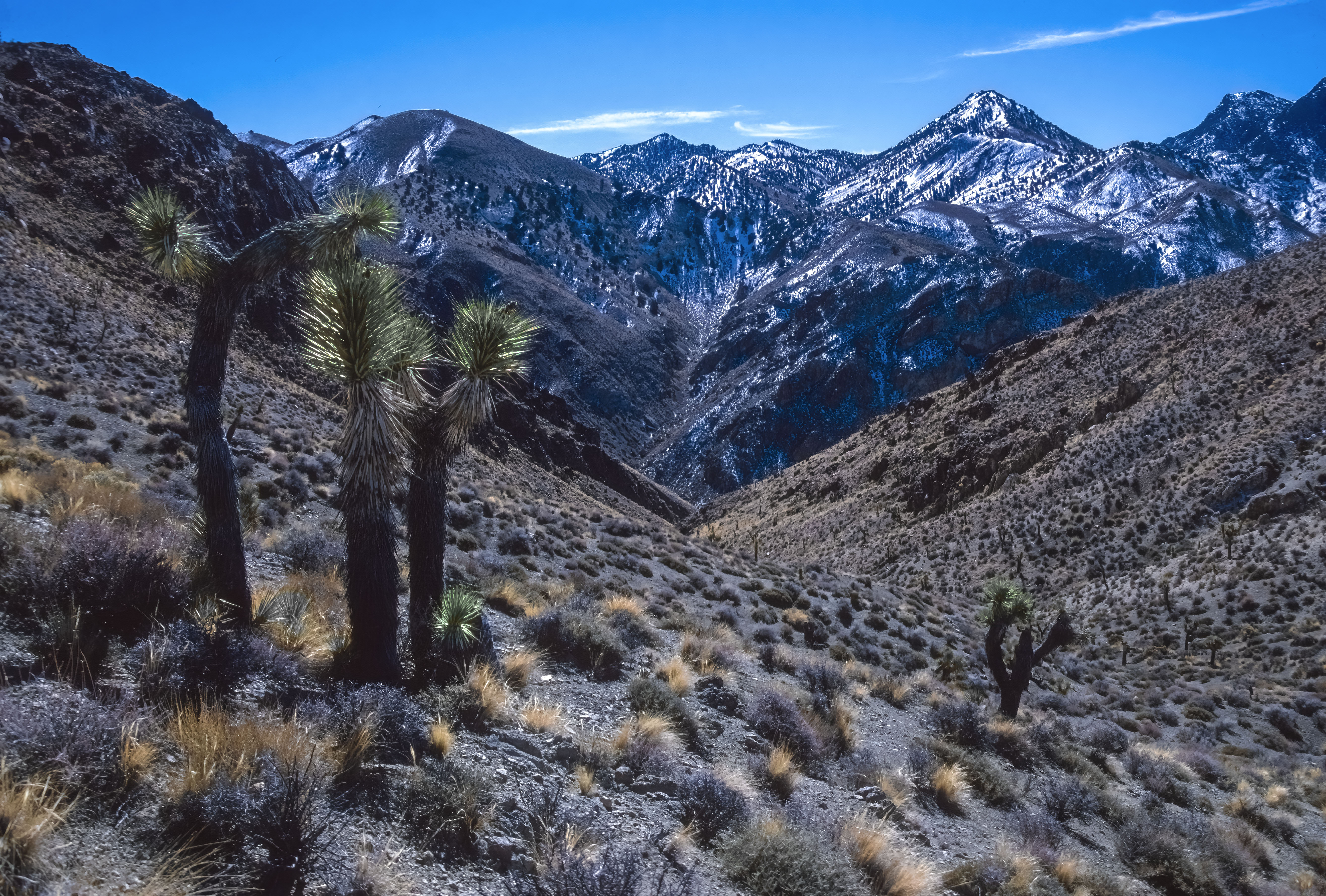 Geology
The geology of the Grapevine Mountains is convoluted and complex. Sedimentary and metamorphic rock of seafloor origins comprise most of the range. The oldest rocks originated more than 500 million years ago in a rather deep sea environment and are characterized by quartzite and sandstone. Younger rocks exhibit a shallower sea and contain limestones and shales in thinner bedding. About 150 million years ago, the land began to fold, fault, and cook, changing the structure of the rocks and, in some cases, forcing older rock to thrust over younger rocks. Erosion and continual faulting forced elevational changers and created the spectacular mountains we see today. The Grapevine Mountains have an ancient origin and foster a feeling of connectedness with the origins of the earth.

Plants
Pinyon, juniper, Joshua trees and a stunning diversity of cacti, bushes, forbs, and flowers indicative of the Mojave ecoregion can be found throughout the Nevada portion of Death Valley Wilderness. Desert fivespot, brittlebush, beavertail cactus, and barrel cactus are a few of the delightful plants that create surprising, secret gardens throughout the Wilderness.