The Stillwater Wildlands are safe for now!

Stealth Land Grab in the Great Basin from en on Vimeo.

BREAKING NEWS There will be no military expansion into the Stillwater Range and surrounding public lands at least for now.

At the end of 2020, Congress voted in support of the National Defense Authorization Act in early December and the negotiated language was a 25-year status quo extension of what the Fallon Training Range Complex currently has. President Trump vetoed the NDAA and Congress overrode his veto at the end of the year.

On July 21, 2020 – the Trump Administration issued a Statement of Administrative Policy (SAP) regarding H.R. 6395 – NDAA - Here is the section that addresses the renewal of the Fallon Range Training Complex Land Withdrawal and Reservation (Section 2842).

The Administration appreciates section 2842, which would extend the current withdrawal and reservation of lands known as the Fallon Range Training Complex (FRTC) to November 6, 2046. However, the Administration strongly urges Congress to adopt DOD’s request to expand the FRTC to provide the area needed to fully accommodate modern military training requirements. This requested expansion of the range is essential to accommodate Naval Aviation and Sea, Air and Land (SEAL) training at Naval Air Station Fallon needed to support the National Defense Strategy. The FRTC is currently too small to accommodate realistic training with precision-guided munitions, and is too small for SEAL ground mobility maneuver training in a tactical and relevant environment.

On June 11, 2020 the Senate Armed Services Committee proposed no expansion for the Fallon Range Training Complex. Just a status quo renewal of what they have until November, 2041. They did however, also add the following language.

The committee recognizes the need for the Navy to effectively train sailors and marines in the most realistic environments. However, the committee believes that there is more work to be done with all relevant stakeholders, including other committees of jurisdiction, the Nevada delegation, tribes, hunters, environmentalists, and others. As such, the committee directs the Navy to reengage and develop a new compromise approach that balances training needs with those of all relevant parties.

Of course there is still a long way to go in the NDAA process and things may change BUT it's a great first step to Saving the Stillwaters!

On January 10, 2020, the United States Navy released their final Environmental Impact Statement  to assess the potential environmental impacts of the proposed expansion of the Fallon Range Training Center in Churchill County. The document is the Navy's assessment of the environmental impacts of its plan to quadruple the size of the training complex. On March 13th, the US Navy issued their Record of Decision (ROD) for the Fallon Range Training Complex Modernization Final Environmental Impact Statement.

The Navy held a public meeting on the final EIS in Fallon on Jan. 28. The meeting included poster stations staffed by Navy representatives and a presentation overviewing the final EIS, followed by an opportunity for the public to provide oral comments. There was over an hour of comments from individuals including members of multiple tribes, exploration geologists, rock hounds, local residents, and conservationists. There were no comments in support of the expansion as outlined in the final EIS.

Friends of Nevada Wilderness has reviewed the final EIS and has these comments in response.

Also, several members of the coalition fighting the proposed Air Force expansion into the Desert National Wildlife Refuge signed on to this letter outlining their opposition to the Fallon expansion, as well.

History of the Navy's previous actions and public involvement:

Your voice was heard…

In May, 2019 the Nevada Legislature passed Assembly Joint Resolution 7  - "Expresses the opposition of the Nevada Legislature to the proposed expansion of the Fallon Range Training Complex." The resolution was introduced by the Committee on Natural Resources, Agriculture, and Mining but a special thanks goes to  Assemblywoman Peters for her work championing this resolution. A huge thanks to all of you who called, wrote and attended meetings at the legislature! 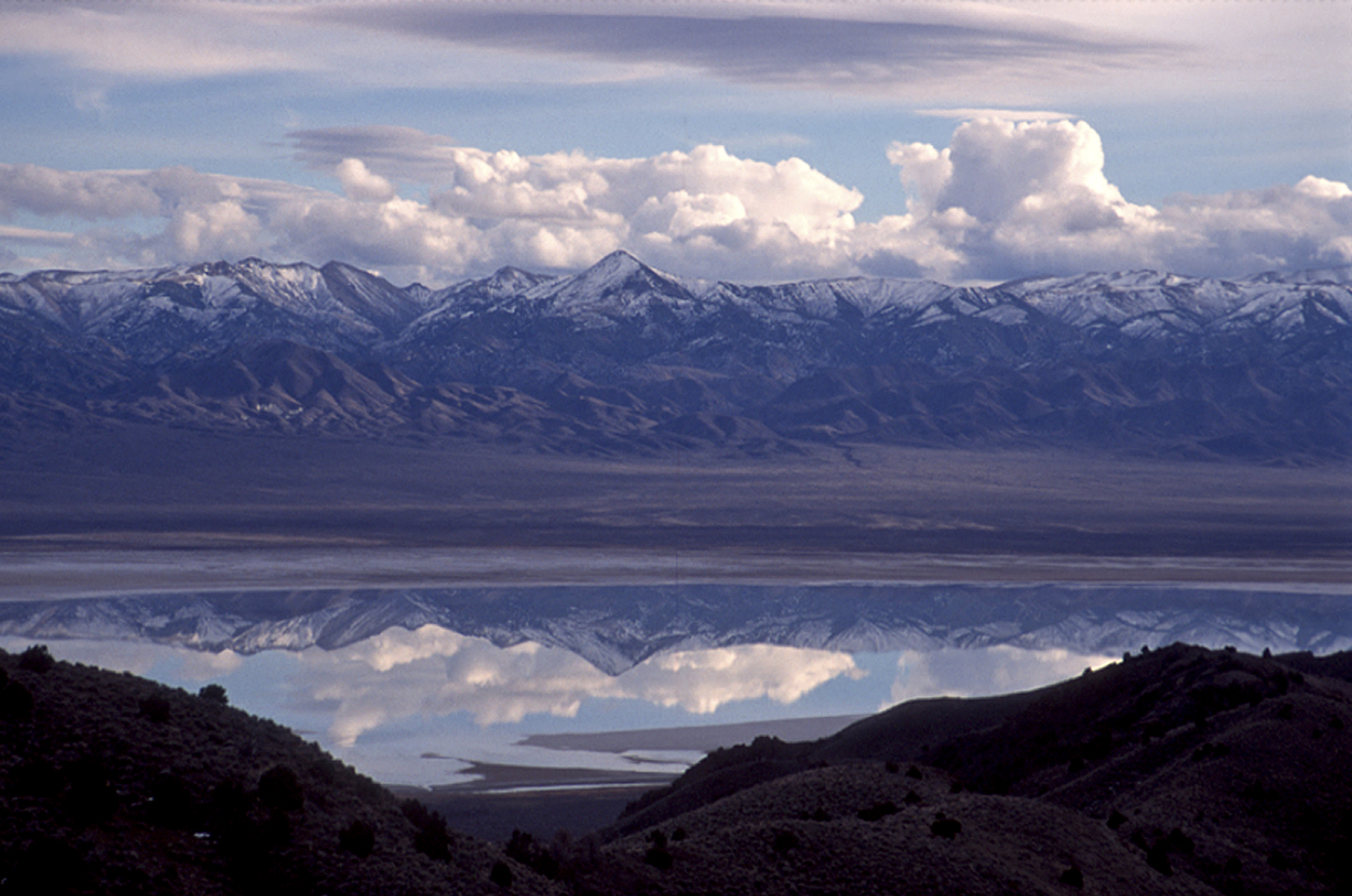 The military had proposed to shut you out of more than 350,000 acres of valuable public land YOU own in order to expand the Fallon Naval Air Station bombing range across six counties in Nevada. Will you sign our petition asking your members of Congress to turn down this current proposal from the military?

The Navy’s Fallon Range Training Complex is seeking to withdraw and reserve for military use approximately 606,685 acres of public lands managed by the BLM - and closing 359,928 of those acres to the public. If successful, this will increase military-controlled lands in the area to nearly 1,000 square miles - quadrupling their area of control from 239,575 acres. Their proposal includes the elimination of 74,400 acres of Wilderness Study Areas in parts of the Clan Alpine Mountain, Job Peak and Stillwater Range WSAs. We think Wilderness designation is a better option for conservation AND the military! Rather than getting rid of portions of WSAs, urge the military to support full Wilderness designation for the five WSAs surrounding their proposed expansions.

This is military overreach. Please tell your elected representatives the Navy needs to come back with a measured proposal that protects national defense while preserving the resources we value in Nevada.

Friends of Nevada Wilderness has been working through the military EIS process sending in comments, attending meetings and meeting with the Navy. We hope to bring other stakeholders together to find a way to protect our Wilderness Study Areas and ensure public access.

Read more for details below.

Watch the Stealth Land Grab Video and see what's at stake! Produced by an advocate for Nevada Wilderness and Native Rights.

The military’s selected Alternative 3 will:

Review the maps below to see how your public lands will be impacted. We must find a better solution for protecting our wildlands and public access. 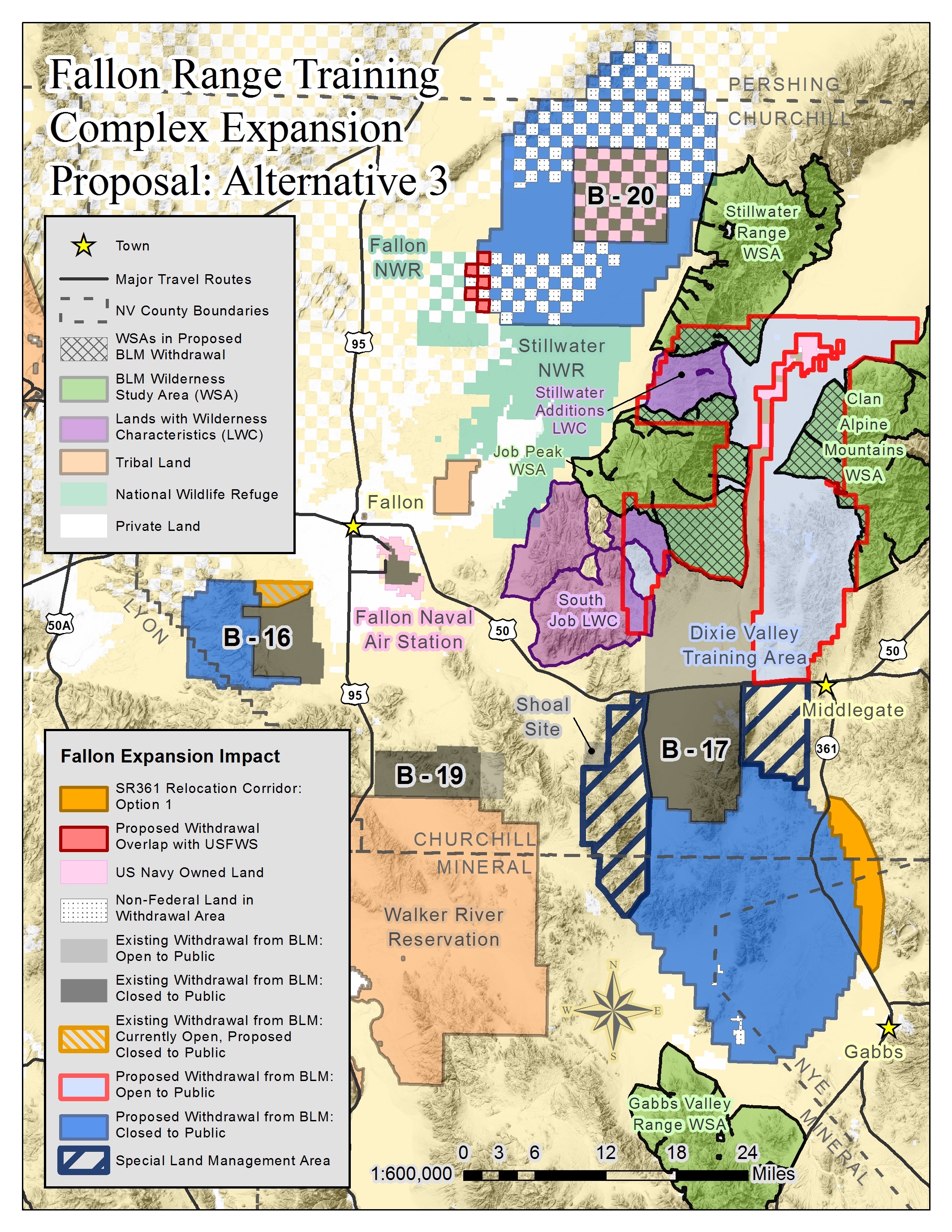 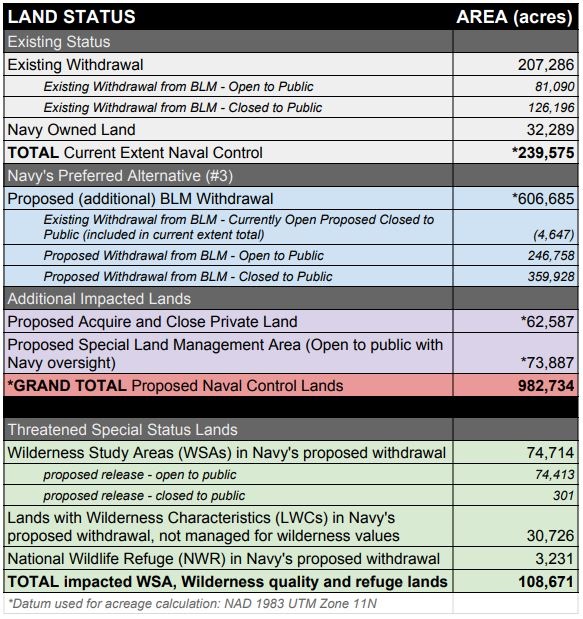 1.) Sign our petition here to the Nevada Congressional delegation urging them to stay active in this process.  The armed services committees in the House and Senate will be working on final resolution of both the Fallon expansion request and the Nellis Test and Training Range expansion into the Desert National Wildlife Refuge during the spring and summer of 2020.

2.) Visit the wild places we could lose if the full proposal goes through. We need as many people as possible who have personally visited these places to advocated for them.

2016 - From October 3rd-October 7th 2016, the FRTC held a series of public meetings to present the Alternatives and the proposal, as well as accept public comment. Thank you to everyone who attended these meetings and to those who submitted written comments in. The FRTC stopped taking public comment on December 12, 2016. The FRTC has published the following timeline moving forward.

November 16, 2018 – January 15, 2019 – 60-day period for the public to provide comment on the analysis in the draft Environmental Impact Statement. This period includes the public meetings listed above.

March 13, 2020 Record of Decision - Final selection of an Alternative. After the Navy issues the record of decision and receives final Congressional approval, the Navy will begin implementation. 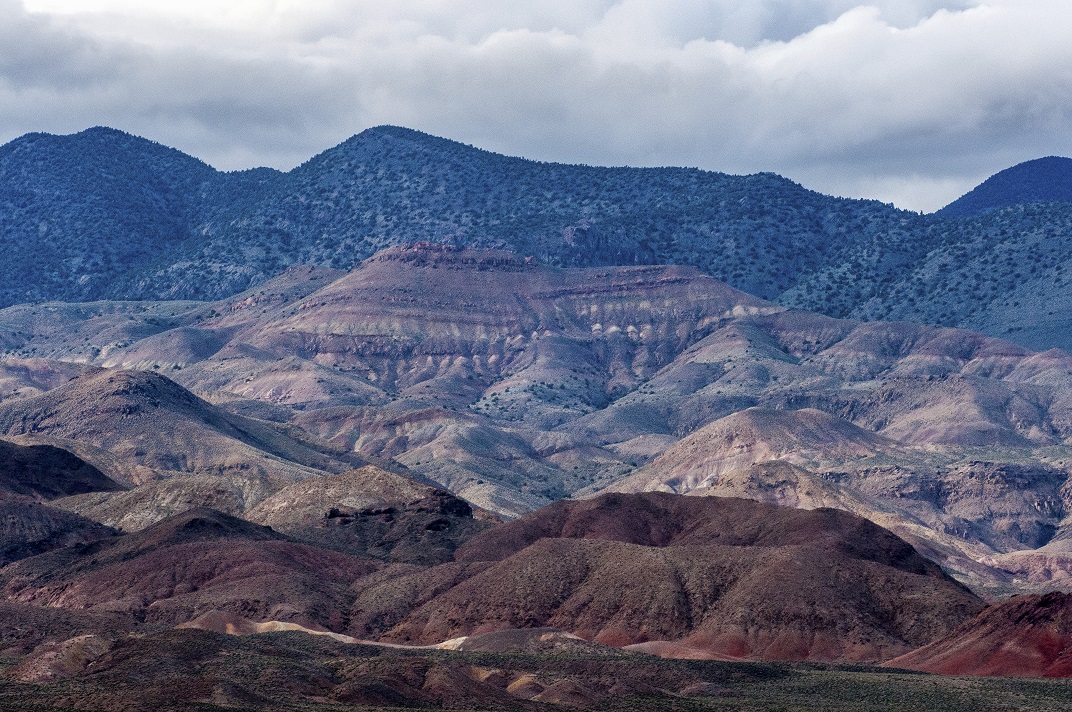 The Stillwater Range Wilderness Study Area is a colorful area of rolling hills and rugged peaks. Photo by Kurt Kuznicki.

The Stillwater Range Wilderness Study Area includes roughly the central third of the Stillwater Mountain Range. The best scenic values are found in Hare and Mississippi canyons, with their colorful geologic formations and rugged terrain. The land is somewhat rolling, with no discernible timber line. The fault scarp on the east side is a result of the 1954 Dixie Valley earthquake. A few wooden buildings are still partially standing at the old mine site in upper White Cloud Canyon. Stacks of cut cord wood intended for use in the smelters at Coppereid, outside the WSA, can still be seen in some of the side canyons north of White Cloud Canyon. For more information, click here. 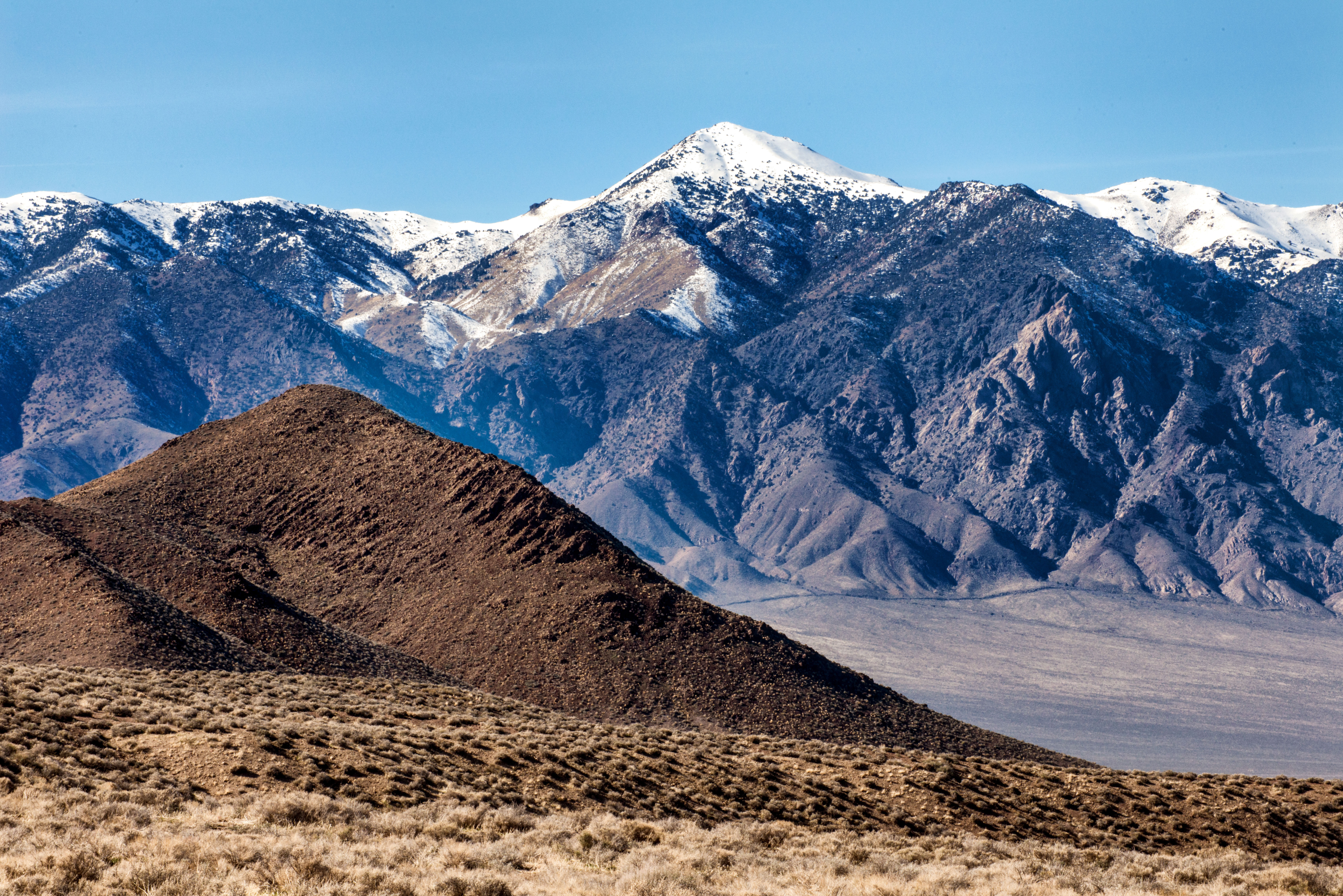 The Job Peak Wilderness Study Area includes the southern third of the Stillwater Mountain Range where elevations range from about 3,600 feet in Dixie Valley to 8,785 feet at the summit of Job Peak, the highest point in the Stillwater Range. The most interesting natural features are associated with the rugged canyons in the northeast portion of the area stretching from Coyote to Little Box Canyon. The northeast part of this WSA are best for hiking and camping due to the scenic canyons. Desert bighorn sheep, once native to the range but eliminated through poaching and diseases transmitted by domestic sheep which grazed the area until the 1940s, were successful reintroduced into the WSA in 1981. For more information, click here. 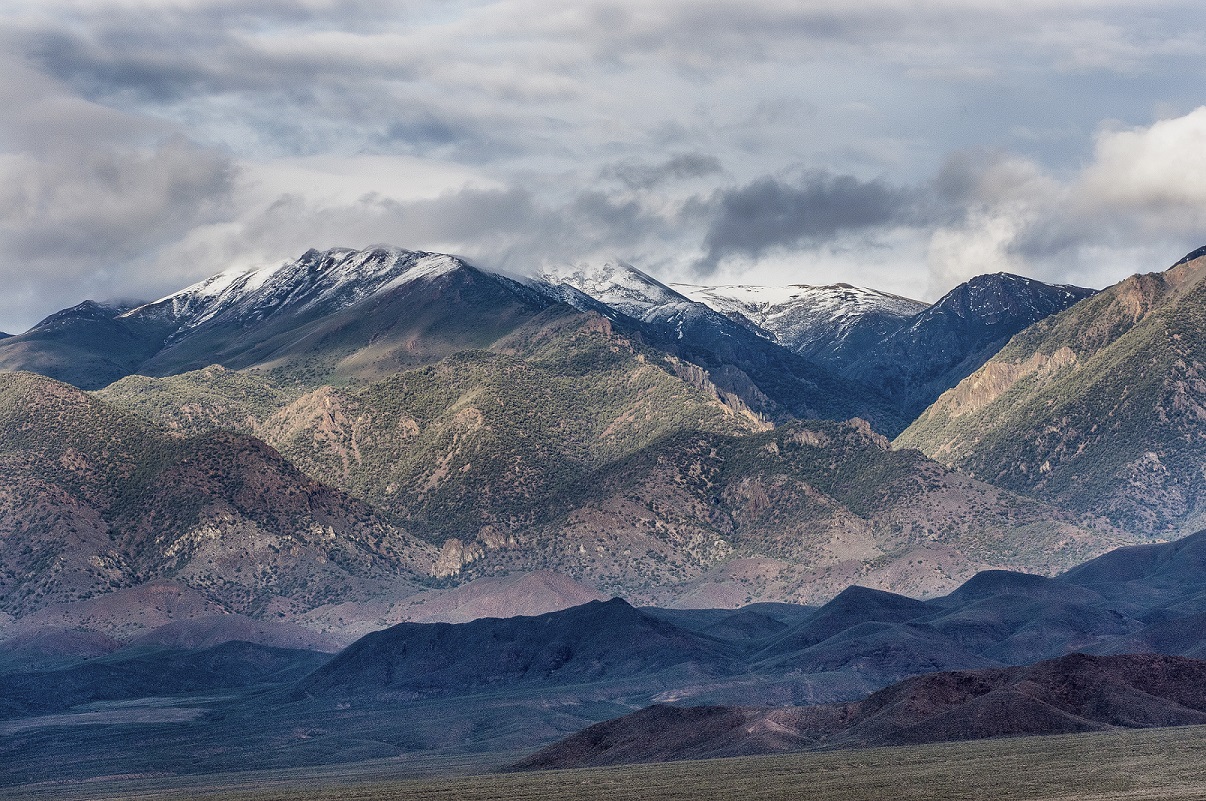 The Clan Alpine Mountains WSA is the perfect destination for solitude and adventure. Photo by Kurt Kuznicki.

The Clan Alpine Mountains Wilderness Study Area is rugged and mountainous. It includes Mount Augusta, the highest peak in the range, and several smaller peaks. It holds multiple winding, deeply dissected canyons and dozens more unnamed canyons. Hiking and camping, hunting and fishing, cross country skiing are the predominant recreational activities. From atop the Clan Alpine crest, the Sierra Nevada can be seen 100 miles to the west. Visitors are impressed by the rugged aspect of Horse Creek Canyon and the strange rock hoodoos of Deep Canyon. Horse creek and Cherry Creek support trout fisheries. Learn more here. 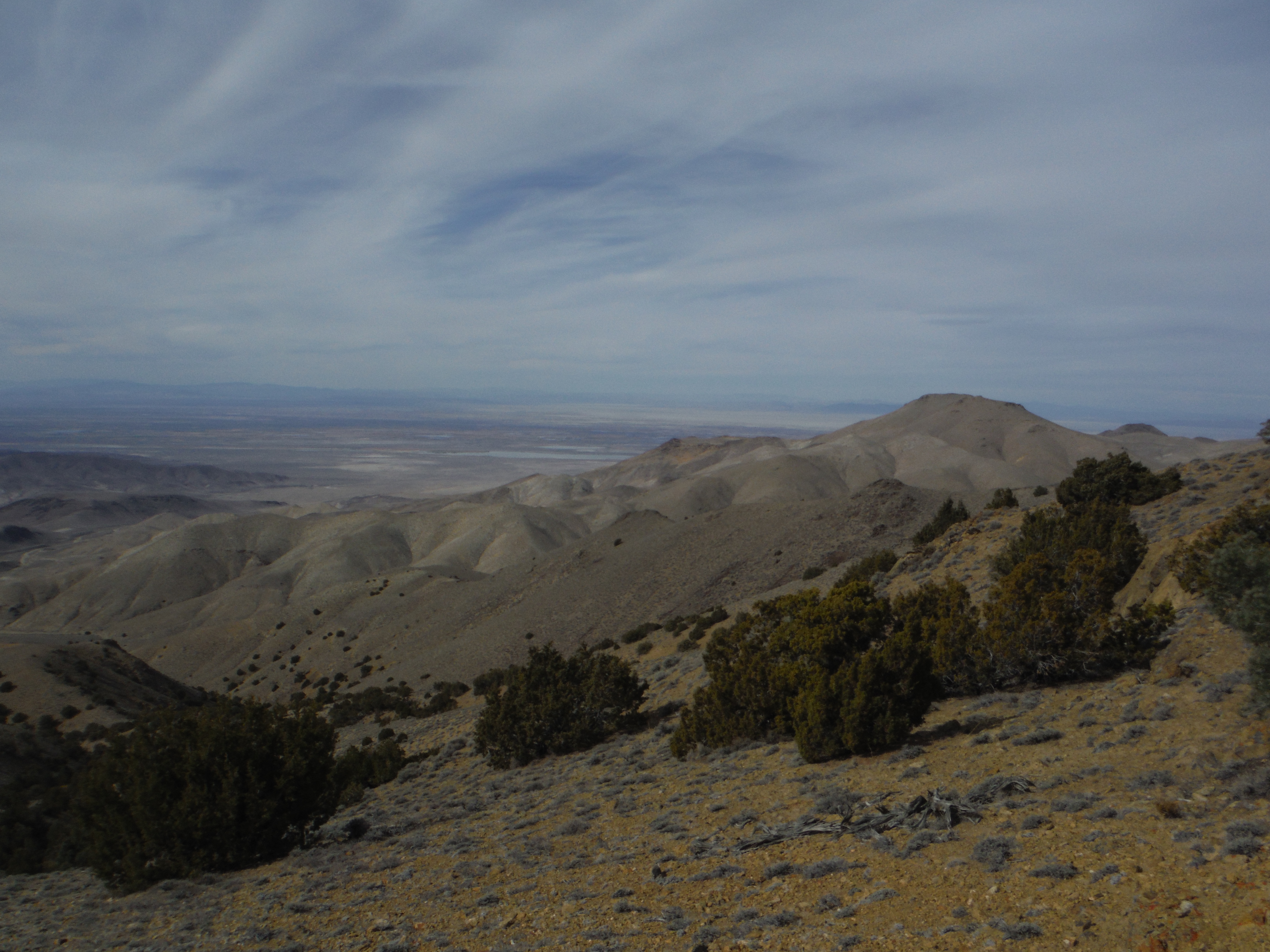 The Job Peak Lands with Wilderness Characteristics Units provide an essential piece to the vast wild lands hidden in this area. Photo by Will Boyer.

Job Peak Contiguous & South Job Peak Lands with Wilderness Characteristics units combine to create an incredible complex of diverse habitat and scenery. The sprawling landscape of the Job Peak units are dominated by alluvial deposits, washes, canyons, and tall bluffs with ancient lake lines. Colorful rocks occasionally outcrop, adding variety and interesting scenery. Higher elevations, which merge in the Job Peak Contiguous Unit, bring gradual changes to the ecosystem: sagebrush, rabbitbrush, pinion pines, and juniper trees blanket the hills, providing color and contrast to these rising lands. Within the canyons and colorful hills, silence is overwhelming.  One can be immersed within the wilderness feel, the cares of the civilized world forgotten. It would be hard to achieve a greater sense of solitude than the outstanding opportunities found in this unit. The proximity of these units to the greater highlands of the Job Peak and Stillwater WSAs create an outstanding opportunity for immersion into a vast complex of wilderness and solitude. For more information on these areas, click here. To learn more about Lands with Wilderness Characteristics, click here. 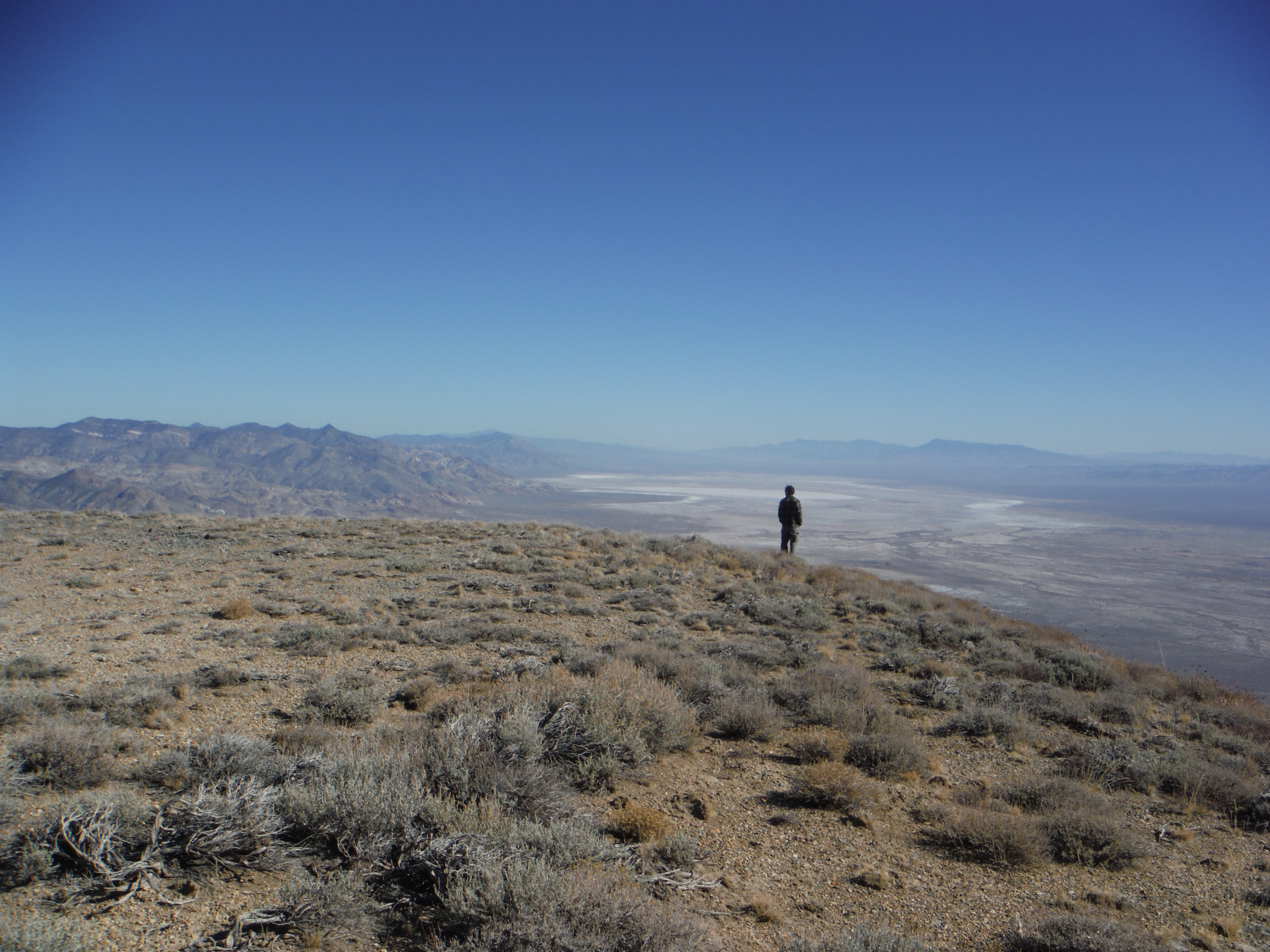 Rising to a single tall ridge, the Stillwater Additions Lands with Wilderness Characteristics unit bridges the gap between the Stillwater WSA and the Job Peak WSA. Covered in beautiful forest and extensive sage, the mountains forming this ridge are steep and beautiful. Deep canyons fall off to both the east and west, draining into the Dixie Valley and the Carson Sink respectively. Within these canyons brush is thick and greenery ever-present, while the mountains and ridges dominate the skyline. From the top, views are extensive and expansive in all directions, encompassing much scenic and desolate terrain. Many animals also call this region home, occasionally dipping down to the water for a drink. In these lands one gets a sense that nature is in control, and humanity is distant. For more information on this area, click here. For more information on Lands with Wilderness Character, click here.