Rock shelters in the Grant Range show archaeological evidence for ancestral Newe seasonal occupation for more than 7,000 years. These rock shelters represent base camps from where these early people utilized the canyons and ridges to intercept migrating bighorn sheep and collect and process pinyon pine nuts (ecologically a late arrival to this part of the Great Basin) and other plant resources as evidenced by and abundance of metates and manos. Additional resources included cottontail rabbits, squirrels, and the occasional mule deer. In 1863 the Treaty of Ruby Valley formally recognized most of Nevada as the Newe Territory. The treaty asked for safe passage through the Newe Territory for US citizens, protection for the Pony Express, and permit mining for gold on their land and future construction of railroads. In return, the Newe were to receive payment of annuities in cash or goods equaling $5000 annually for 20 years, but were only paid for the first year. In 1962 the Newe people filed to reclaim their land with the Indian Claims Court, which ruled that the Newe had lost control of their land due to settler encroachment, and they were not entitled to any claim from the US government. In 1979, the Indian Claims Commission awarded a $26 million land claim settlement to the Newe people. The US Supreme Court ruled in 1985 that the Newe land claims were extinguished by this financial settlement. The Newe refused to take the money. Today, the Blue Eagle Wilderness complex is within the Newe traditional homelands and remains contested. To learn more about the world of the Newe people, see the story of “Old Adam” in the Additional Resources Tab on the left of this page.

The earliest American interest in the greater Blue Eagle region began with the discovery of the Troy ore deposit in 1868, just to the south of the Blue Eagle/Riordans Well WSAs. The first media mention of the Blue Eagle moniker is associated with Blue Eagle Springs situated on the floor of Railroad Valley immediately west of the rising escarpment of the WSA. An 1875 Daily Nevada State Journal newspaper article describes a murder and maiming of prospectors by a third member of their party at the location “Blue Eagle Springs Station.”

Blue Eagle Springs became an important watering and grass supply for the miners and their animals working this central portion of Nevada. One of these “well known” miners was Alexander Beatty, who was also identified as a “granger” (a member of The National Grange of the Order of Patrons of Husbandry). He settled into the region and established the Blue Eagle Ranch at the spring. As early as 1875, Blue Eagle Ranch and the neighboring community of Currant were contributing livestock and produce, respectively to mining communities as far away as Eureka. As the mining activity wound down at the turn of the 20th century, ranching in the Railroad Valley and orchards in the community of Currant became the primary economic drivers in the area surrounding the Blue Eagle Wilderness complex. A 1903 Newspaper article states that “Charles Garrett has recently erected a saw mill in the foothills about seven miles east of Blue Eagle, Nye county.” This sawmill would most likely have been built along the roads that separates the Blue Eagle WSA from the Riordan’s Well WSA.

Blue Eagle Mountain was most likely named after Blue Eagle Springs. The name may have originated from a mis-identification of a raptor found in the vicinity of the springs. There is also a story that the name “Blue Eagle” as associated with the mountain, may have come from “the figure of a blue eagle which early settlers said that they could spy on a nearby mountaintop, if the season and sunlight were just right” (Nye County History- interview with Lina Sharp.) This, however, sounds suspiciously like a just-so story to attribute meaning to the name of the mountain. 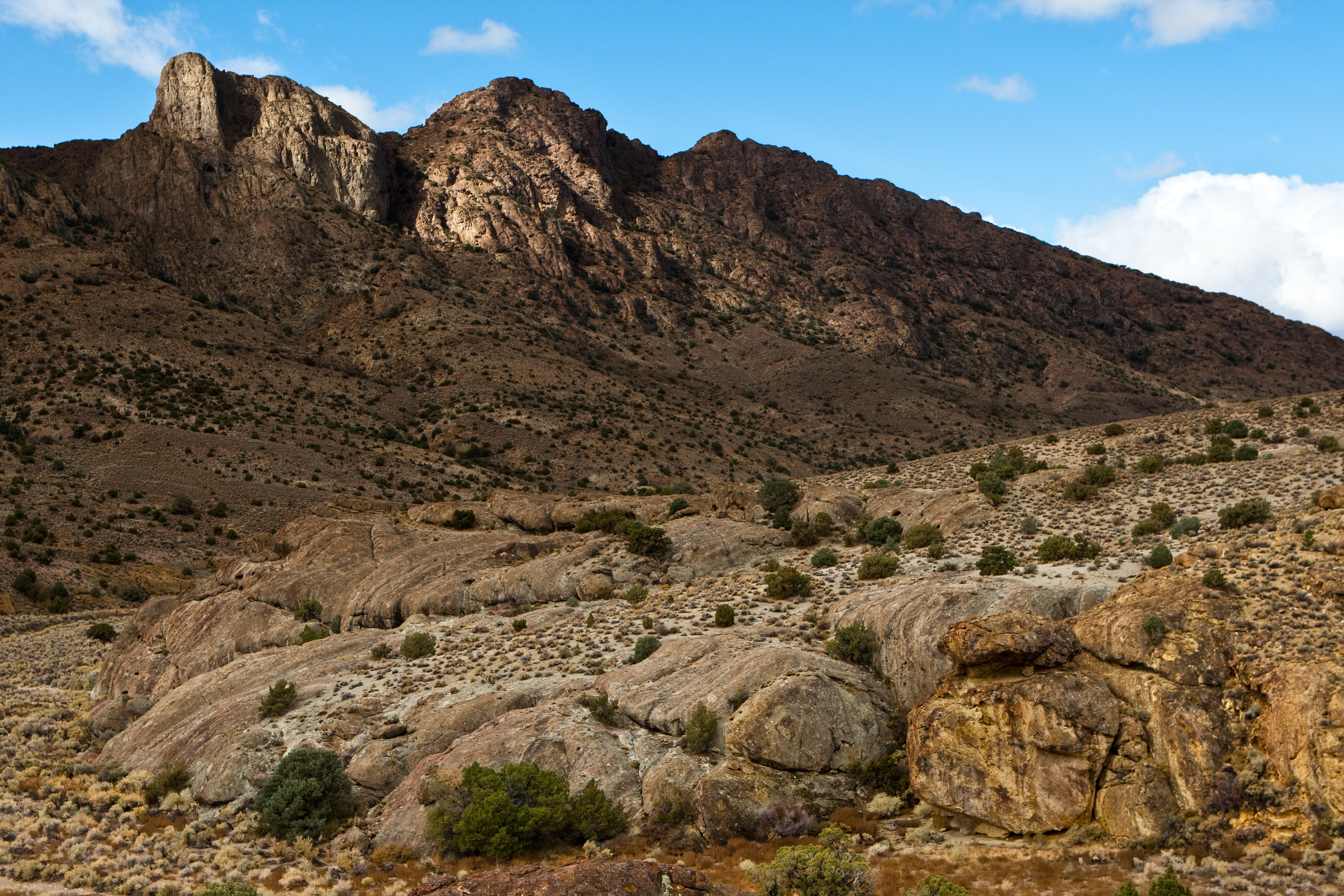 Geology
The Grant Range is an east-tilted fault block. The faulting exposes a stratigraphic section, from west to east, of thick carbonate sedimentary rocks of the Paleozoic continental shelf that are overlain by Tertiary basin deposits and by a sequence of Tertiary volcanic and basin-fill deposits. The oldest exposed rocks, which are on the western side of the range, are metamorphosed lower Paleozoic rocks. These carbonate rocks are host to many overhanging shelters and caves, including Thunder Cave, which has been documented but not fully explored.

The range is structurally complex, having been affected by both Mesozoic compressional and Tertiary extensional processes. The eastern side of the northern Grant Range is topographically gentle and generally heavily forested; the western side is cliffy and deeply dissected. The total relief is about 4,960 ft (feet) between Railroad Valley, west of the range, and the highest point in the range at Blue Eagle Mountain (9,561 ft). Within the Riordan’s Well portion of the Wilderness complex, the highest point is an unnamed peak (9,352 ft) along the crest of the Grant Range in the southern part of the area. The north end of the complex, Ragged Ridge features colorful Tertiary-period rhyolite volcanic with slickrock and boulder ridges to entice rock scrambling. Some Quaternary volcanism also occurred within the area.

Plants
Most of the greater Blue Eagle area is primarily forested with pinyon pine and juniper. Lower benches feature treeless sagebrush areas and several of the higher elevation summits also feature treeless sagebrush balds. At mid-elevations mountain mahogany mixes into the pinyon/juniper forests, becoming quite thick on southwest facing slopes. Aspen can be found in the upper canyons and well-watered locations, while cottonwoods grow in the lower canyons near water sources. Stands of ponderosa pine, found in scattered locations in the canyons of the western slopes, provide a treasure house for seeds and sources for biodiversity. As latitudes increase, white fir trees begin to replace the pinyon/juniper. On the 9,000-foot plateau of Blue Eagle Mountain scattered bristlecone pines appear. 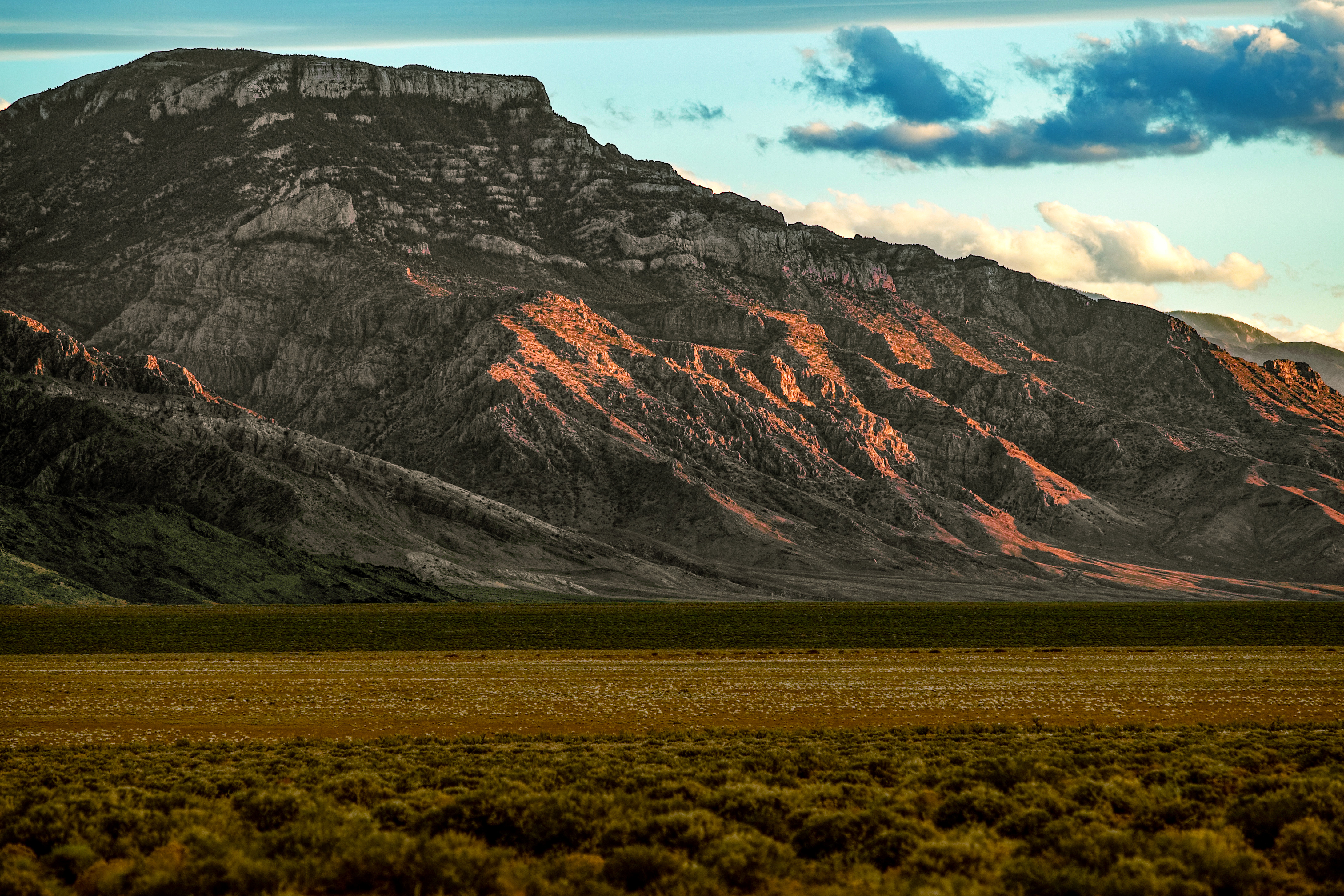