The north end of the Grant Range consisted of a vast complex of BLM managed public lands with wilderness values. Unfortunately, this area straddles the boundary between the Battle Mountain and Ely Districts of the BLM. As a result, a comprehensive Wilderness proposal has historically been elusive. With the input of public comments, the 1979 BLM Initial Inventory Decisions recommended 190,700 acres of Riordan’s Well (040-166), 9,000 acres of Morgan (060-188), 10,400 acres of Callaway Well (060-199), and 62,500 acres of Grant (060-158 aka Blue Eagle) for intensive wilderness study. This is a complex of wilderness totaling 272,600 acres. By the 1980 Proposed Wilderness Study Areas (WSA) report for the state of Nevada, the Morgan unit was found lacking in outstanding wilderness characteristics and was dropped from further consideration. The Callaway Well unit was found to be contiguous with Grant unit, added to the Grant unit, and the combined unit was renamed Blue Eagle (NV-060-158/199). This combined unit dropped 14,100 acres from further consideration and recommended 58,800 acres for Wilderness Study Area status.

Of the 190,700-acre Riordan’s Well unit, the 1980 proposed WSA recommendation was reduce to 54,400 acres. The 1980 report implies that the reduction of the WSA was somehow involved with a comment provided by the United States Forest Service, which had created an “instant” wilderness proposal on Forest Service managed land, immediately south and contiguous with the Riordan’s Well unit. This BLM report stated: “U.S.F.S. has indicated that a portion of the unit would enhance its wilderness proposal and all the contiguous lands should be dropped from further consideration.” This appears to be the primary justification within this report for dropping 136,300 acres of wilderness from the Riordan’s Well unit.

The 1987 Final Environmental Impact Statement Wilderness Recommendations for the Egan Resource Area, the Bureau of Land Management proposes only 37,542 acres of the Riordan’s Well WSA as suitable in their proposed action, while dropping 19,460 acres, identified as unsuitable, because of mineral conflicts. The 1987 Final Tonopah Wilderness Recommendations Environmental Impact Statement recommended 58,350 acres of the Blue Eagle WSA as suitable for wilderness designation.

The 1991 Nevada BLM Statewide Wilderness Report recommended no wilderness designation Riordan’s Well and Blue Eagle WSAs. The rationale for this decision lay solely with a misinterpretation of the 1988 Mineral Report for the area. The 1991 BLM recommendations included the following statement in the Battle Mountain District report: “The decision to change the recommendation was made after reviewing the U.S. Geological Service and Bureau of Mines report, U.S. Geological Survey Bulletin 1731-D… This report assigned the whole WSA a high energy resource potential for oil and gas” and this statement was mirrored the Ely District report: “The decision to change the recommendation was brought about by the findings in the final mineral report from the USGS/BM… This report stated that the entire WSA is believed to have high potential for oil and gas”. The 1988 USGS Bulletins (1731-D & 1731-H) themselves, however, clearly stated that although the rocks within both the WSAs were of the proper type and age to contain disseminated oil, “there are unanswered questions about petroleum migration and traps; the wilderness study area[s] may be a better source area for oil and gas than a reservoir area.” Subsequent studies showed that the producing oil fields in the area are concentrated in the Railroad Valley itself and not in the mountain formations of the adjacent WSAs. The production from the wells adjacent to the WSAs have continually dropped throughout the intervening years and no new discoveries have been made. Despite the seriously flawed 1991 BLM lack of wilderness designation recommendations for Riordan’s Well and Blue Eagle WSAs, these areas remained protected for their wilderness values by their 1980 Wilderness Study Area designations. As of 2022, Riordan’s Well and Blue Eagle WSAs protect over 113,000 acres of the sublime wilderness of the northern Grant Range and form a pivotal link in a chain of protected wilderness lands that stretch more than 100 miles from the Quinn Canyon Wilderness to nearly US Highway 50. 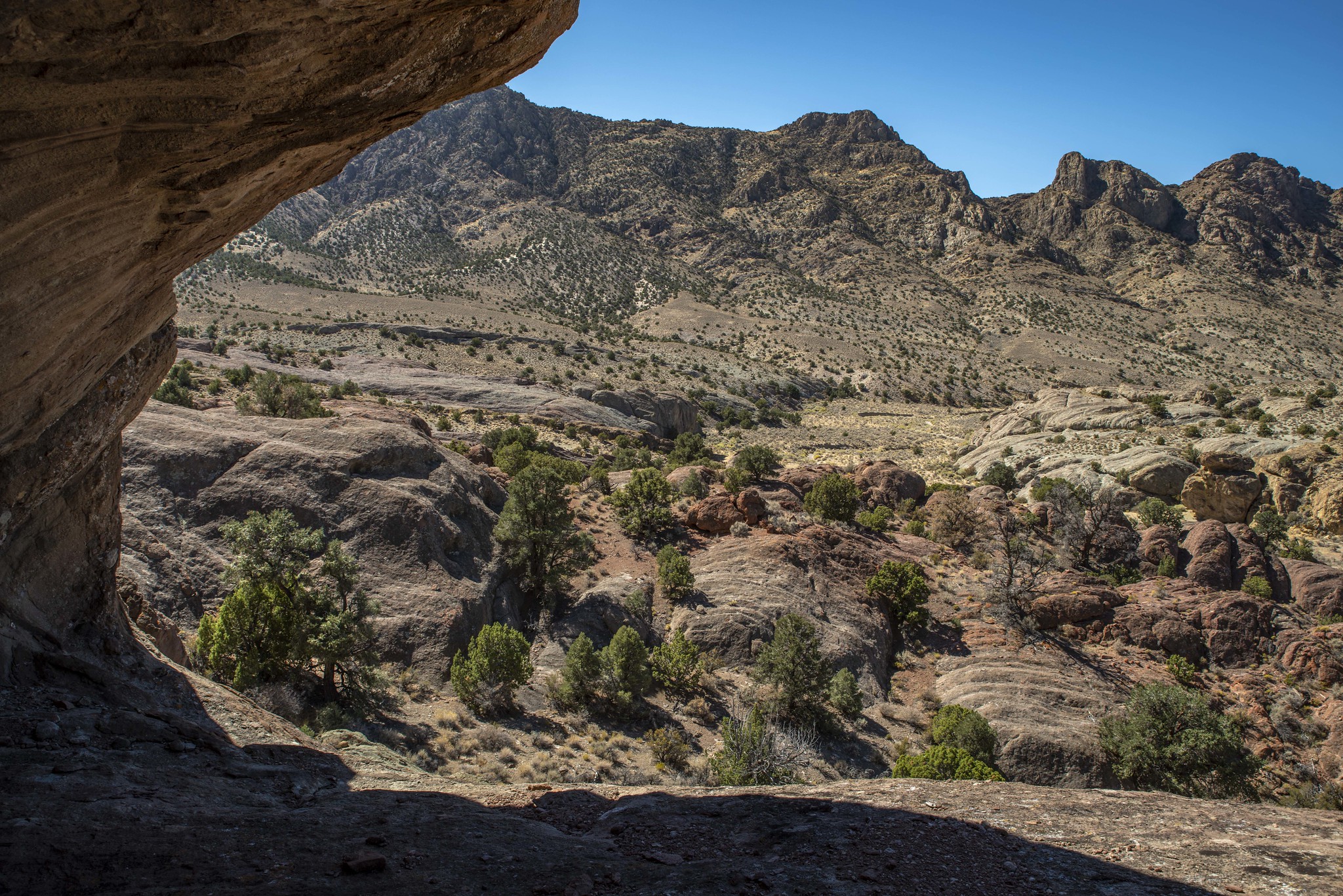 The Story of "Old Adam"

In 1880, the Eureka Sentinel posted a story about “Old Adam,” a Newe Elder from Duckwater who lived his entire life in the vicinity of Eureka and Blue Eagle. He was purportedly about 100 years old at the time he was interviewed and conveyed the story of his people to the reporter. The article is, of course, full of the biased cultural perspectives of the Euro American culture that pervaded the time, however a careful reading reveals insights into the indigenous Newe culture and the wealth of knowledge the Newe elder held about the ecological and climatological history of this part of Nevada.

First, the moniker “Old Adam,” ascribed to the Newe elder by the reporter and town’s people of Eureka, may represent the cultural reluctance of a solitary Native American to reveal his name to people outside of his tribe and family. Or, the Anglicized name may represent the difficulty and refusal of the Euro Americans to understand or learn elements of the Newe language.  When the article goes into extensive detail about the environmental history of Central Nevada, the reporter misrepresents the descriptions of the changes over time to the life span of the Newe elder rather than looking at the possibility that the timeline he presented is the cultural history of the Newe people in this part of Nevada. According to the reporting, the Newe elder “recollected” a time when there was “not a tree to be seen on any of the mountains of this section,” the “nutritious pine” was not in the area at that time either. The Newe elder outlined that, at the time before the trees, the hills abounded in mountain sheep, elk, pronghorn, deer, and jackrabbits. The reporter mentioned that at this earlier time, “the sagebrush had not attained its present rank growth” and the “sage hen and grouse came later, not having been known in these part prior to thirty years ago.” This last reporting about the distribution of sagebrush may be a reflection of the Euro American history itself. The ecological impacts of domestic livestock overgrazing were indeed beginning to impact the fragile grasslands of Central Nevada by 1880. This deterioration of the Nevada grasslands would accelerate rapidly for the remainder of 19th century. This would literally sow the seeds for the 20th century plague of exotic weeds and cheat grass that would exacerbate the catastrophic consequences of anthropogenic climate change for Nevada in the 21st century.

The Newe elder report of the time before the pinyon trees, correlated nicely with late 20th century biogeography findings that the pinyon pine has been colonizing the Great Basin continuously since the warmer conditions associated with the end of the Pleistocene. These warmer conditions permited the tress to move northward about 11,000 years ago. Archeological evidence suggest that the pinyon pine nut was not utilized by the ancestral Newe people until 5000 years ago in Central Nevada. Clearly, the Newe elder in the Sentinel’s reporting could not have personally witnessed the arrival of the pinyon pine in Central Nevada. The elder’s personal history could, however, be intricately intertwined with the cultural traditions of the Newe people and passed down as landscaped-based stories and songs through countless generations. The Newe elder’s observation that the mountain sheep were much more plentiful and wide spread is also collaborated by 20th century archeology as petroglyph representations and remains of these animals having been discovered in camp hearths dating thousands of years ago found in lower elevation than the sheep are known for today. The Elder's accounts also collaborated the archaeological evidence that the Newe people utilized rock shelters for untold generations. From an ecological perspective, many of the changes documented in the Sentinel's reporting and noted by the Elder, were the result of rapacious conversion of Central Nevada by Euro Americans in the latter half of the 19th century, including the unintentional diseases introduced into native mammals by livestock, impediments to natural migration patterns by linear features such as railroads and roads, and the general intolerance of wildlife of continual human presence and activity at water sources and within breeding and mating grounds.

Another disturbing statement from the Sentinel article suggests that: “It is a mistaken idea that the Shoshones, as a tribe, were ever stronger than they are now. They have steadily increased in numbers since Adam was a boy.” Statements like these are blind to the diseases of the Euro American invaders that often spread like precursor waves and collapsed indigenous populations before these populations were contacted and documented by Euro Americans. This propaganda that indigenous people were few in number and inconsequential on the landscape is the mantra of Manifest Destiny and was used to assuage the guilt and culpability of the colonial invaders as the perpetrators of murder, cultural destruction, and dispossession of indigenous people from their traditional homelands and lifeways.

The final chapter of the Sentinel’s reporting documented the death and burial of the Newe elder. Unfortunately it also documents the intrusion and disruption of Newe funerary practice. A couple of Euro American miners, curious about the activity in at a small encampment of Newe people, entered the encampment and witness the dying man they knew as “old Adam” about to be buried. Incensed that the Newe elder was still breathing, they interrupted the funerary practice and insisted that Newe people could not bury a man while he was still breathing. Although not explicitly stated in the news article, what is recorded is the that Newe people knew that their elder was still breathing, but that his time was past- “To prove this they put snow on his forehead, which not melting, they argued that he was far enough gone to be put out of the way.” The miners “demanded a suspension of the funeral practices and succeeded in getting the old fellow back into his blankets.” What is clear from this biased reporting is that the miners and the reporter writing about this incident felt the Newe were not fully human and did not know the proper Euro American standards for funerary practices. Like all conquers, they felt obliged to impose their morals and religious fanaticism upon these "inferior" people who should not have agency over their own lives or deaths. 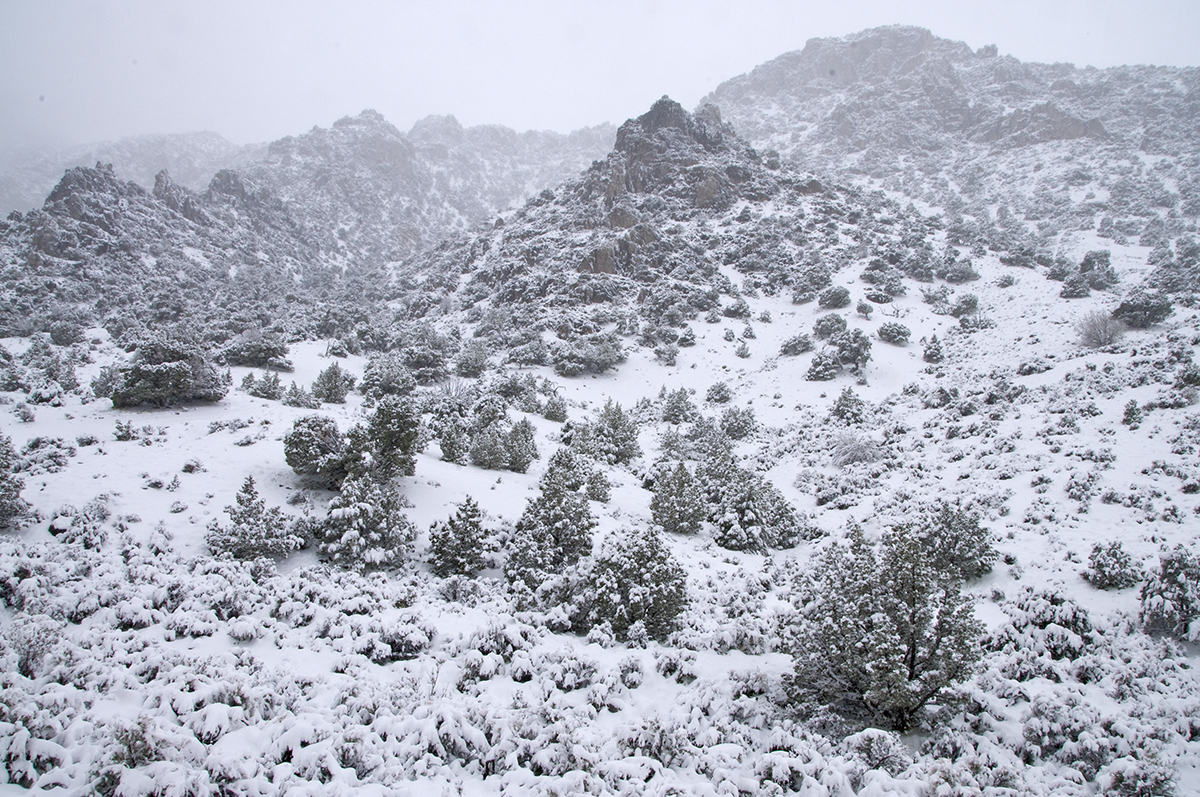