A Deeper Dive into the Conservation of the Toiyabe Crest

By the late 1890s the range conditions on the public lands of the Intermountain West were rapidly deteriorating, particularly around the burgeoning ranching communities of southern Idaho, Utah, and northeast Nevada. The answer to this degradation was the creation of US Forest Reserves, which was welcomed by land based ranchers who wanted to stop the competition from “itinerate” livestock operation, consisting primarily of sheep operations. These initial Forest Reserves, managed by the General Land Office, were mandated by the wealthy cattle interests to rid the West of sheep. In 1897, sheep were banned from Forest Reserves. By 1899, under pressure of various wool grower’s associations and the leadership of the Mormon Church, the regulation changed to allow sheep only if “after due investigation, that no injury will result to the reserve by reason of such pasturing”. But this did not end the animosity between sheep and cattle operators. The Forest Reserves were still looked at as vehicle by the cattle ranchers to reduce or eliminate itinerate sheep operations. As the itinerant sheep operations moved into central Nevada, to avoid the regulations of the Forest Reserves being established in Idaho, Utah, and northeast Nevada, they reached the Toiyabe Range in the early 20th century.

In 1906, an estimated 96,000 “transient” sheep ranged the entire length of the Toiyabe Range, invoking the ire of the local ranchers. The Toiyabe Forest Reserve was established the following year in 1907, a year in which 63,000 sheep and 8,000 cattle forged through the range. Under US Forest Service administration, the number of itinerant sheep in the Toiyabe Range was steadily reduced and cattle became the primary livestock use. By the 1919, cattle were becoming a problem in the range due to lax grazing administration and a blind-eye turned to trespassed cattle. Grazing advisory boards, like the Nevada Land and Livestock Association, applied pressure on the Forest Service to make cattle grazing the primary purpose of the Toiyabe Range. That year the Toiyabe Supervisor Vernon Metcalf was caution against against continuing to allow a large permittee to graze double the forest's established maximum limit of stock. The appointment of a new Forest Service administrator in 1925, “brought grazing administration up from ... a pretty low standard to a fairly high" standard. Even with this change in administration, the pressure from cattle ranching continued to applied upon the Toiyabe Range and the National Forest. Former Supervisor Vernon Metcalf took a position as the executive secretary of the Nevada Land and Livestock Association and worked with Nevada Senator Tasker Oddie to craft the Stanfield-Oddie Bill in 1925, which would have made grazing advisory boards the final authority on disputes between stockmen and the Forest Service. Again in 1928, Senators Oddie and Pittman co-sponsored a bill that would have removed the entire Toiyabe National Forest and transferred the lands to the Department of the Interior as “grazing reserves.” The 1934 Taylor Grazing Act would formalize the grazing regulations and fee collection on public lands, however, these assaults by the cattle industry to discredit the resource protection component of the 1897 Forest Service “Organic Act” would continue throughout the 20th century and into the 21st century. Grazing trespass continued to be a problem on the Toiyabe. Supervisor Ivan Sack reported in 1956 that the Austin and Tonopah districts had about 800 miles of unfenced boundary adjacent to BLM lands. Fencing could have controlled the trespass, but the cost of installation was prohibitive. In early July 1981, members of the Toiyabe Chapter of the Sierra Club and a future member of Friends of Nevada Wilderness would document and file a formal complaint with the Forest Service about trespassing cattle in the Washington Creek area of the Toiyabe Range. By the early 1980s, the Sagebrush Rebellion was actively attempting to strip federal protections for areas like the Toiyabe Range and transfer it to the state, where wealthy ranchers believed they would have more control over grazing, if not outright receive these former public lands into their personal real estate holdings. These anti-government schemes for seizing public lands in Nevada would morph into different different incarnations and see quite a bit of traction in the first 2 decades of the 21st century.

The History of Wilderness Advocacy for the Toiyabe Crest

In July of 1929 the Forest Service issued L-20 Regulation to consolidate and order the previous piecemeal preservation of non-roaded areas and standardized them with the term “Primitive Area.” These management regulations consisted of a simple list of permitted and prohibited activities. Working from this policy, Bob Marshall wrote the “The Forest for Recreation and Program for Forest Recreation Plan” in the 1933 “A National Plan for American Forestry.” Marshall’s Program included “Wilderness Areas… which contain no permanent inhabitants, possess no means of mechanical conveyance, and are sufficiently spacious… [and] preserve as nearly as possible the essential features of the primitive environment.” In 1937 Marshall drafted U-Regulations to replace and update the L-Regulations for wilderness and primitive areas. The following year Marshall and others traveled through the western National forests to map and propose lands for Wilderness and primitive status. The idea of Wilderness had taken hold in the Forest Service. Toiyabe National Forest Supervisor Alexander McQueen took a pack trip along the Toiyabe Crest in August of 1941 and proposed that the Toiyabe Crest could be termed Nevada’s “wilderness area.”

Interest in recreation and conservation for the Toiyabe Crest gathered momentum through the 1950s and 1960s, both locally and nationally. In 1961, Desert Magazine featured an article about Nevada Forest Service recreation and described camping and fishing opportunities in Kingston Canyon and hiking the “Toiyabe Trail from Kingston Ranger Station to Mahogany Mountain.” The Secretary of Agriculture and chief of the Forest Service arranged for Sir Edmund Hillary to make an analysis of recreation areas on national forest lands in 1962. In June he visited the northern Toiyabe Crest area between Kingston Creek and Big Creek. The “Wild Granites” section of the Toiyabe Crest was described by Alvin McLane in his “General Inventory of Potential Natural Natural Landmarks in Nevada” in 1969. A year later, McLane published an article in the spring 1970 issue of the Nevada Magazine, called “Adventure in the Wild Granites.” Based on McLane’s advocacy and research, the Wild Granites was include in the “Inventory of Natural Landmarks of the the Great Basin” compiled for the National Park Service in 1975. The authors of the compilation were so impressed by the area that they stated in their report: “We visited the Wild Granites and recommend that al larger rea than That inventoried by McLane be evaluated as a Natural Landmark.” Unfortunately the Forest Service was so deferential to advocates for exploitive uses of forest lands in central Nevada, that they would resist the Wild Granites becoming a National Natural Landmark. 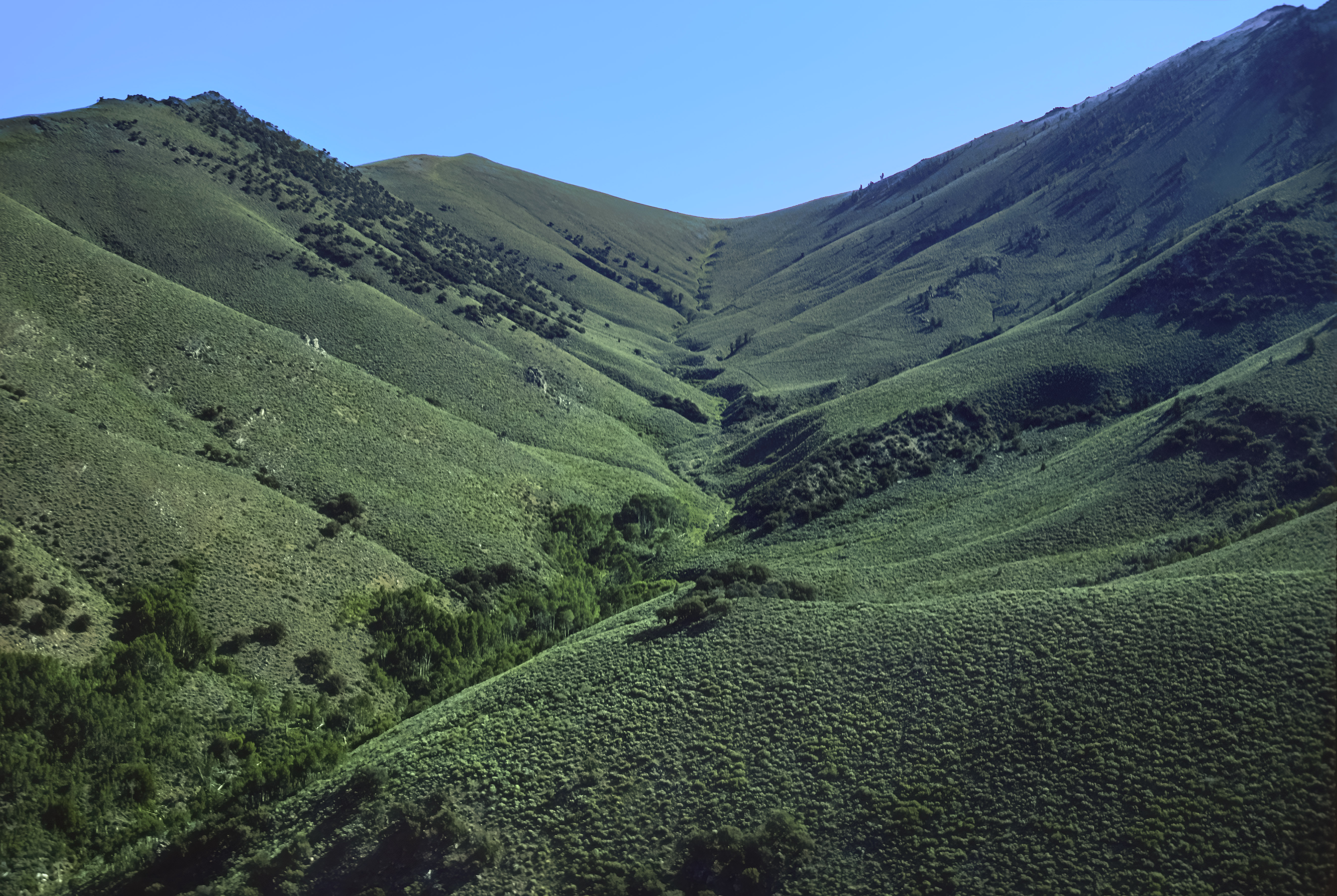 The Origins of the Toiyabe Crest Trail

Throughout the 20th century, the Toiyabe Crest Trail has also been known as the Toiyabe Trail, Toiyabe Summit Trail, and the Toiyabe Ridge Trail. Most sources reference the construction of the Toiyabe Crest Trail as a “Civilian Conservation Corps (CCC) project in the 1930’s.” This is statement is misleading. If the 72-mile Toiyabe Trail had been constructed in it’s entirety as a CCC project in the 1930’s, two questions arise: 1) why would limited Federal resources be used during the Great Depression to construct a long distant recreation trail in such a remote and unused portion of the country; and 2) such an undertaking should have been publicized in the media of the time and touted within the CCC records of accomplishments. There is, however, no evidence in either the press or the CCC records for constructing the Toiyabe Trail in the 1930s. At the time of the CCC efforts in Nevada, recreational developments were created on municipal, county, state, and federally managed lands. The most concerted recreation efforts of the CCC in Nevada’s USFS land was work done in the Ruby Mountains. Records of this work include road and structure construction in Lamoille Canyon and describe several trails built into the Ruby Mountains, including the Road’s End Trail, which would latter become a section of the Ruby Mountain Crest Trail. This raises the question as to why the CCC would spend the resources to construct the 72-mile Toiyabe Trail in a remote location with very little recreation use and not spend the resources to construct the 37-mile Ruby Mountain Crest Trail in an area recognized, at the time, to have high recreational values and use. Some of the work of these crews could have included limited trail work including lateral trails in the numerous canyons of the Toiyabe Range, but a project like surveying and building the 72-mile Toiyabe Trail is beyond the scope of work for the local Reese River CCC Camp. 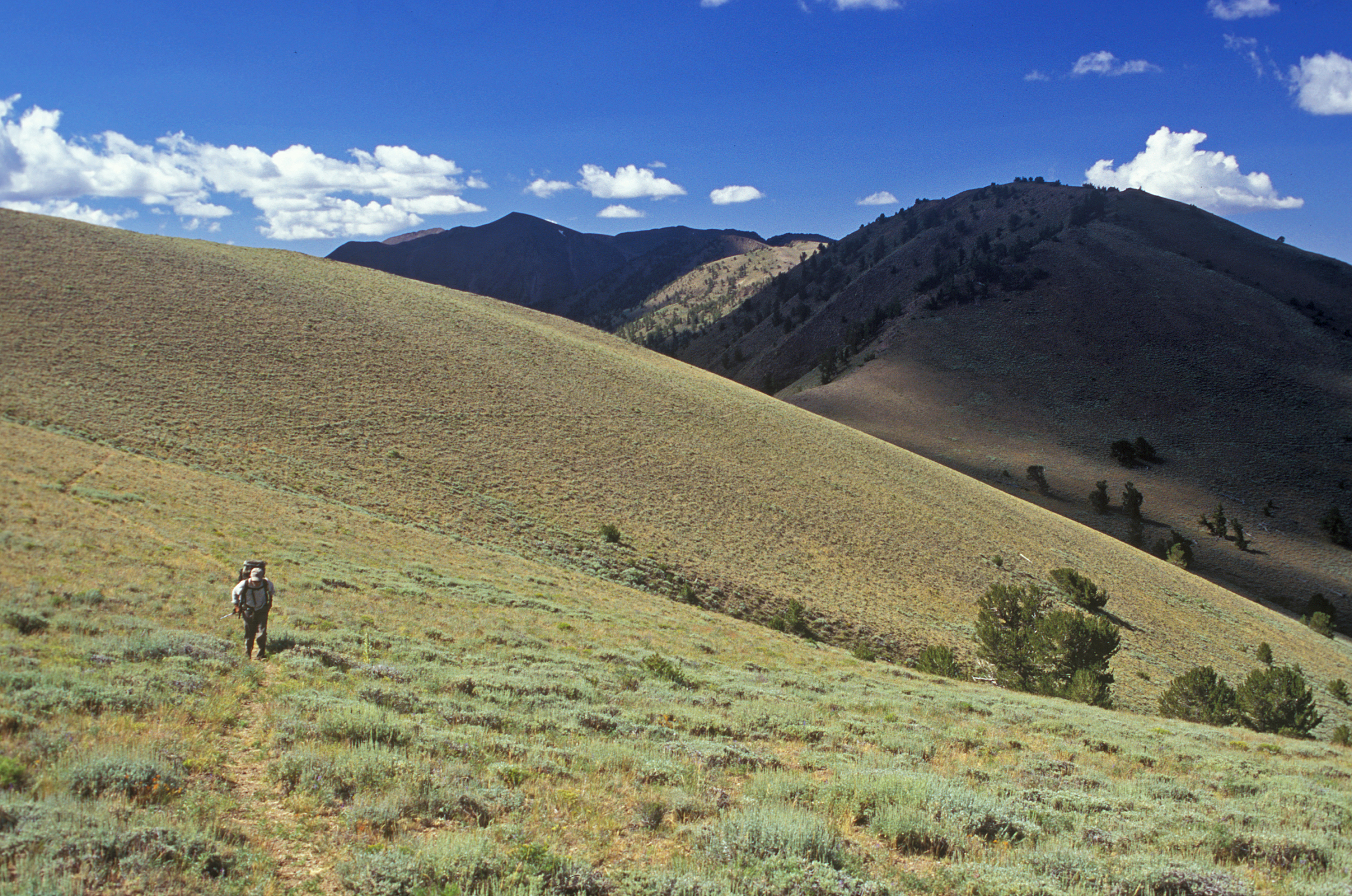 The first recorded traverse of the Toiyabe Crest Trail was in a Nevada State Journal, August 26, 1941.  The article describes 10-day range inspection trip by Toiyabe National Forest Supervisor Alexander McQueen in August of that year.  The trip is described as “utilizing a pack outfit, because the region is inaccessible to other methods of travel.”  The trip is described as starting in Austin and following “what is known as the Toiyabe summit trail for a distance of 100 miles” south through the North and South Twin Rivers to the headwaters of the Reese River, then on into the Ralston Valley, north of Tonopah.  McQueen describes the trip:

This is a very interesting trip, as it penetrates an area of the greatest deer population in the state and probably one as little visited by hunters and fishermen.  This could be termed Nevada’s “wilderness area,” since one can travel many days without seeing anyone save an occasional prospector or sheepherder.

On September 26, 1942 the Reno Evening Gazette published an unattributed full page story based on McQueen’s trip with 4 large photos under the title “Scenes Along the Toiyabe Trail in Central Nevada.”  This article includes the following statement about the origin of the Toiyabe Trail: “the Trail was built by mustangs and extends about sixty miles, from Austin south to head of Reese river.  While the forest service maintains the trail, most of the original location has not been changed.”  This provides a fascinating insight to the origin of the Toiyabe Crest Trail.

“Mustangs," or feral horses, create substantial trails where they move up, over, and along mountains in search for pasture and water.  It is more than likely that the Toiyabe Crest Trail began as a collection of best-fit game trails that became solidified by the movement of feral horses and livestock seeking forage and water along the crest of the Toiyabe Range.  In 1906, there was a report of 96,000 sheep trailed the full length of the Toiyabe Range in both directions; in 1907, 63,000 sheep trailed the length of the Toiyabe both ways and 8,000 cattle also used the same region (History of the Toiyabe National Forest: A Compliation, R4-1680-2009-029, USFS Intermountain Region- Ogden, Utah).  Livestock and livestock driving may have been significant contributor to the establishment of the Toiyabe Trail. As human horseback use continued, this “best fit” route became improved and recognized as an important, cohesive trail. 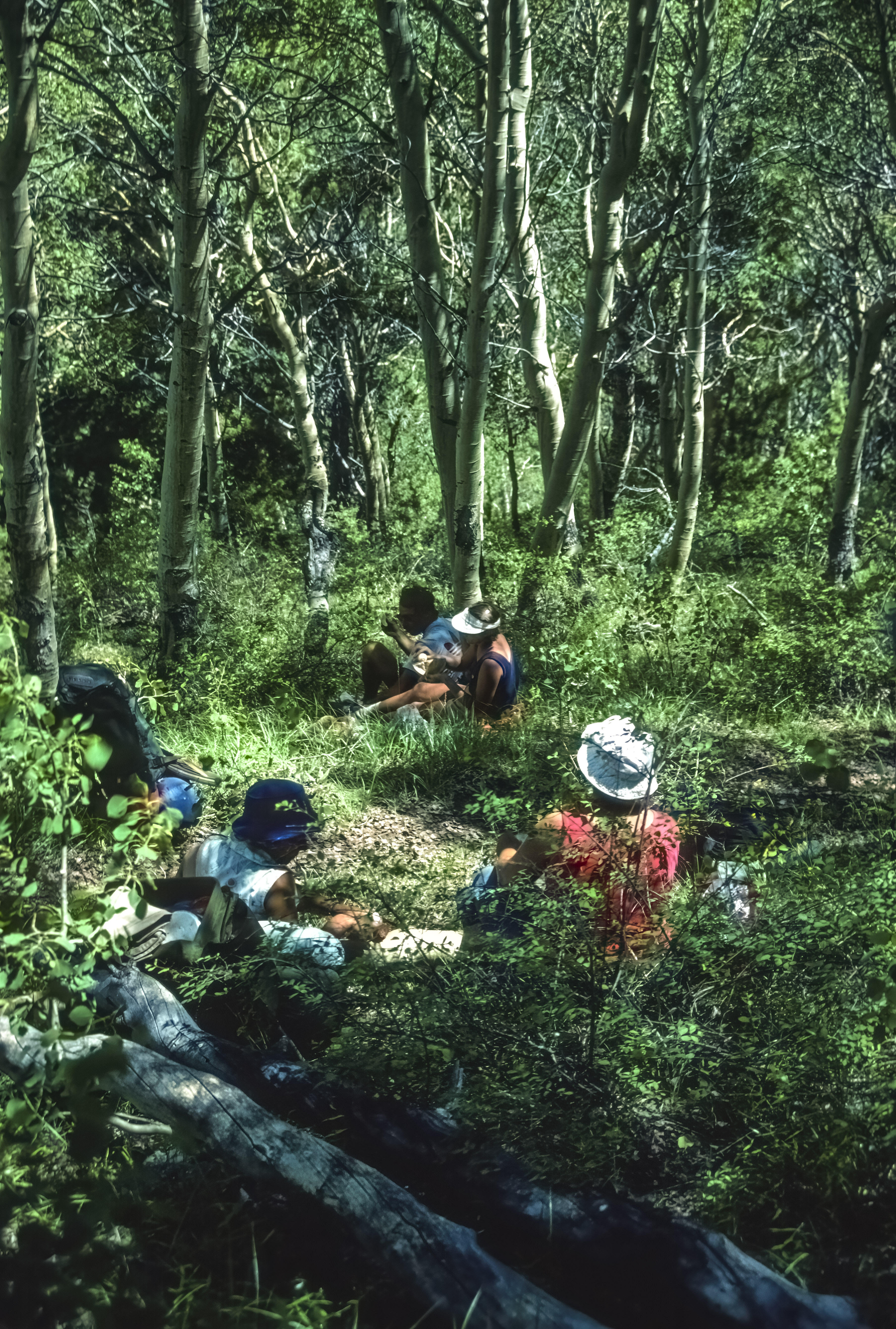