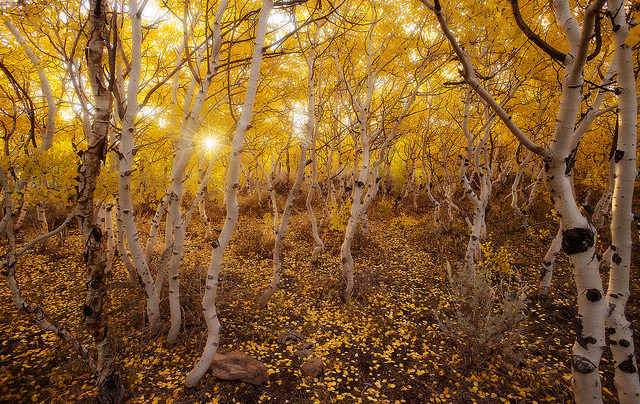 The North Antelopes offer a diversity of natural landscapes. The lowest terrain, found along the northern portion and in the eastern and western-most margins of the unit is a complex and natural, overlapping system of alluvial fans, some of which are younger, and are covered in a carpet of native grasses, perennial herbs and low sagebrush, and others that have grown in with big sagebrush and piñon-juniper woodland. Even this easily accessible and vulnerable landscape seems to be free of human impact and functions with the rhythm of nature; their patterns reflecting the incredible folded mountainscape above. Throughout the piñon-juniper zone at mid elevations, high folded and volcanic mountains rise to nearly 9,000 ft. In this zone, many healthy springs are surrounded by unique, generally pristine alpine meadows. The abundance of flowing water in the unit provides habitat for a healthy population of high desert wildlife, including the Greater Sage Grouse. Riparian areas are healthy as well, with stands of willow, aspen, native grasses, wild rose, serviceberry growing thick in the common presence of water. Animal species include: elk; mule deer; big horn sheep; pronghorn antelope; feral horses and burros; cougar; coyote; cottontail rabbit; jackrabbit; golden eagle; harrier, swainson, coopers and red tail hawk; northern kite; long eared and great horned owl; kestrel and prairie falcon; sage grouse; sparrows; nuthatch; northern flicker; raven; Clarks nutcracker; horned lark; sage thrasher; horned, collared and sagebrush lizards. Geologically, the proposal is varied as well, with limestone uplifts in the north and west, and volcanic tuff and rhyolite outcroppings in the southern portion of the unit. Caves, arches, and intriguing rock formations of all sorts can be found along canyons.

Limestone uplifts in the west form striking cliffs. Volcanic tuff and rhyolite outcroppings occur throughout the unit and ancient lava flows create extensive rimrock formations near the summit of the range. The 10,100 foot-high Ninemile Peak is a volcanic dome, as are many of the smaller, unnamed buttes in the unit. Caves, arches, and intriguing rock formations of all sorts can be found along canyons in the north and are scattered among high basins in the central portion of the wilderness.

These units offers outstanding opportunities for primitive and unconfined recreation. Nearly every inch of this unit is accessible to the visitor with the determination and skills to traverse trackless wilderness. Those interested in geology will find caves, arches, peaks, and outcroppings to explore. Vast stands of aspen in the highest reaches of this unit offer an entirely unique desert experience. The area is extremely photogenic, especially in fall when the aspen forests cover the landscape with hues of red, gold, green and chocolate brown. Other activities include: cross country skiing; snowshoeing; landscape painting and sketching; rock scrambling; hiking; orienteering; backpacking; rock hounding; bird watching; primitive camping; horseback riding, hunting, and general sightseeing. This unit is within one of the darkest regions of the United States. The opportunity for star gazing, and night sky photography are truly outstanding.