Mount Stirling and the Spring Mountains have served as an important cross-roads and desert oasis for humans for at least 13,000 years. The earliest people are believed to have focused on big game animals that roamed the margins of the numerous Pluvial Period lakes the filled the valleys surrounding the Spring Mountains and left the playas and sand dune systems we are familiar with today. These early traditional peoples foraged into the surrounding mountains for additional hunting and gathering opportunities including hunting rabbits, deer, and bighorn sheep, and gathering seeds, roots, tubers, berries and nuts. They also used the springs in the area for raising gardens of concentrated native food crops. Mount Stirling surely was visited by these early people for the available resources and for the prominent position the mountain inhabits within their cultural landscape. Today Mount Stirling is recognized as an area of cultural importance for Newe (Western Shoshone), Southern Paiute, and Chemehuevi Paiute, people. Nuvagantu (“Snow Mountain” in the Paiute language) is part of many creation stories and is a fountain of life. Nuvagantu reaches into the sky, pulls down rain and snow, then purifies this life-giving water in its layers of rocks. The Southern Paiute refers to themselves as Nipakanticimi (or Nuaguntits), roughly translating to “the people of Nuvagantu.” Puha, the Paiute word for the power or energy in the universe, is believed by traditional peoples to be highly concentrated in the area and focused at very specific site. Perhaps this explains the curious distribution of petroglyphs found within the Wilderness lands. The abundant petroglyph elements in the area represent a considerable diverse culturally-mixed use of the area. An unusual petroglyph site extends along the summit ridge north of Mount Stirling itself. Other indigenous sites include milling equipment, which may be indicative of a pine nut processing site. There are several rock circles, situated on a slope overlooking a wash which could be the remnants of a village encampment. All artifacts are protected by law. Please respect these lands and traditional uses by Native American people who have utilized these lands as an important part of their respective cultures for countless generations. Do not touch or walk upon petroglyphs. 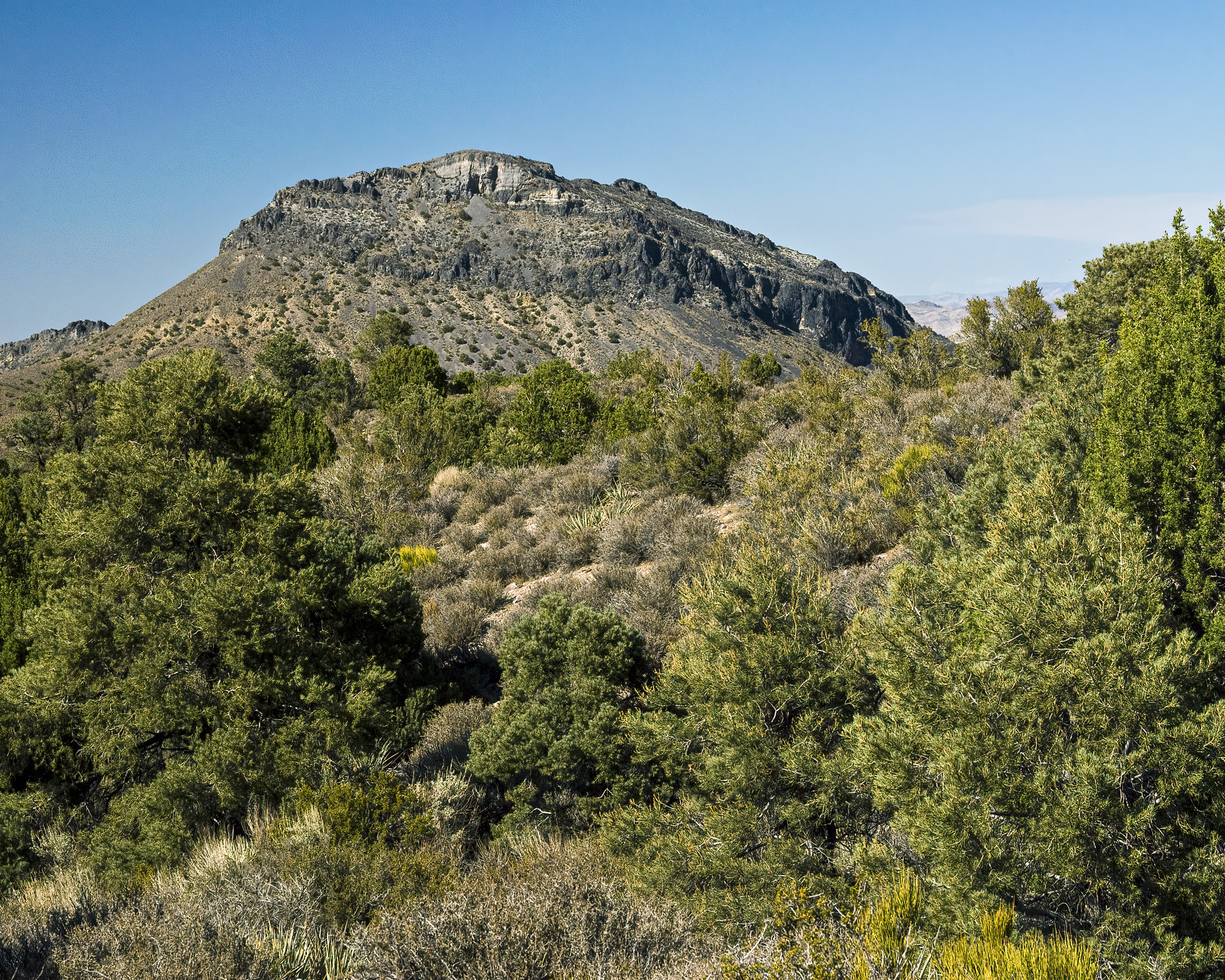 Geology
The Mount Stirling area is comprised predominantly of Late Proterozoic (900 mya) and Lower Cambrian (570 mya) siliciclastic strata and minor limestone deposited on the continental shelf and overlain by Upper Cambrian (550 mya) to Permian (275 mya) carbonate strata. The northern Spring Mountains contain a complexly faulted, easterly dipping section of these Proterozoic and Paleozoic rocks, which is folded into the broad Wheeler syncline in the southern and eastern parts of the study area. The Late Proterozoic Stirling Quartzite (700 mya) is a sequence of quartzite and minor shale, dolomite, and siltstone. It usually crops out in large bluffs to low ledges and forms prominent razorbacks on most ridges. Many quartzite beds are characteristically pink due to the presences of an iron-based matrix. The grain size in the quartzite generally ranges from granule to fine sand with a mode of coarse sand. These minerals reflect a low greenschist grade of metamorphism. Cambrian (570-500 mya) rocks in the study area consist of shale, siltstone, and quartzite with limestone and dolomite increasing up section and include the Wood Canyon Formation and the overlying Carrara Formation. Capping the Paleozoic carbonate sequence is the Carboniferous (330 mya) and Permian Bird Spring Formation (275 mya). This formation is overthrust by the Wheeler Pass sheet of rocks. Quaternary alluvial fans on the east and west flanks of the range are composed of clasts of rocks eroded from the Precambrian and Paleozoic formations exposed in the higher parts of the range. 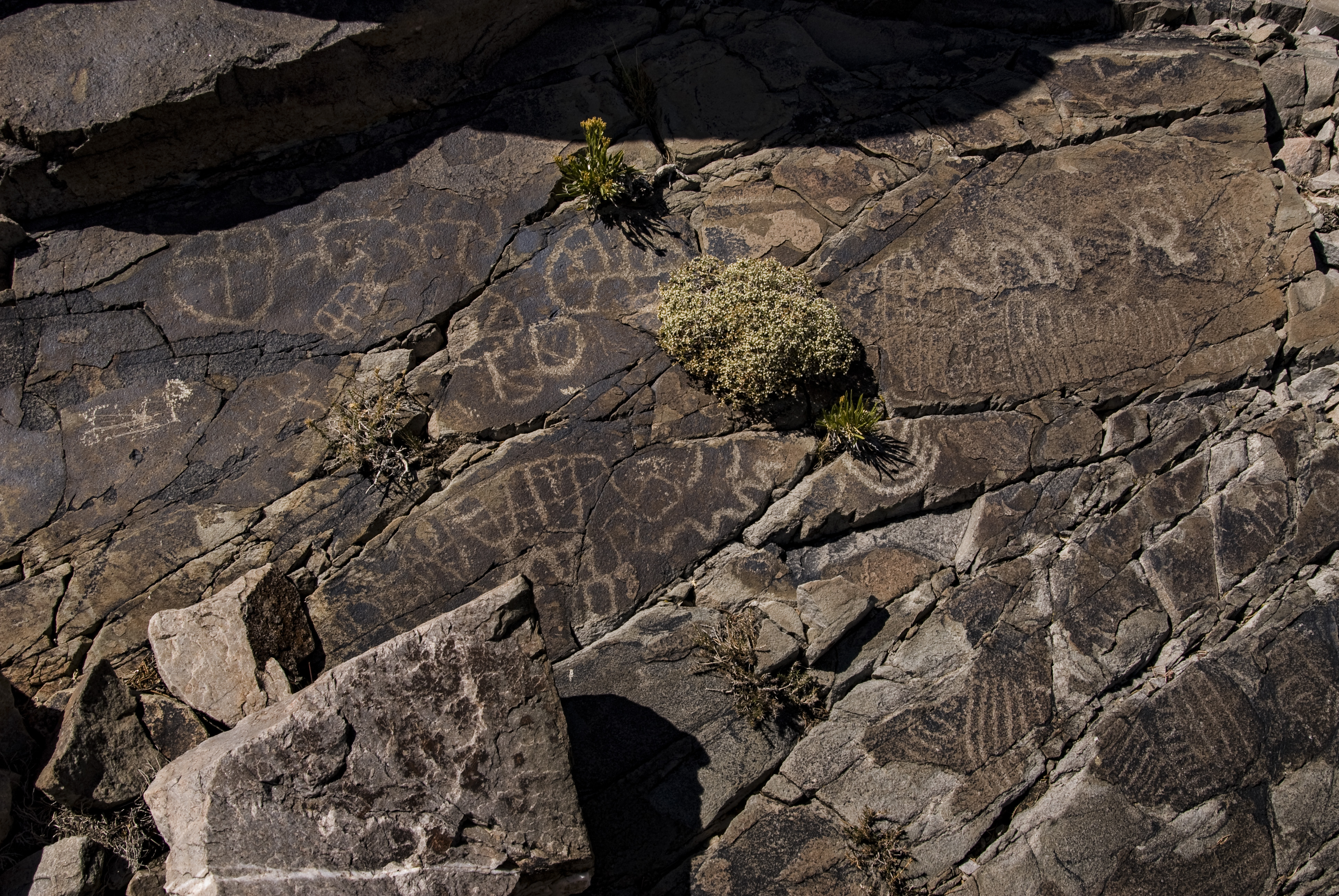 The Mount Stirling area may have entered history with an undocumented expedition by Thomas L. “Pegleg” Smith as early as the 1840s. Smith was a dubious character who trafficked in kidnapped Native American children and stolen horses at that time. Southern Paiute elder Tecopa (c.1815-1904) reported seeing some white men camped at Indian Springs while journeying west, including a “mean-looking man with one leg carved out of a tree stump” who other members of the party called “Pegleg” Smith.

By the late 1880s, Euro American activity had pushed into the mineral deposits on the north end of the Spring Mountains, just north of the present Mount Stirling WSA boundary. Initially these gold deposits were worked first by local Native Americans then later by ranchers who had moved into Indian Springs. The earliest claim (the Mountain Boy) was located about 1/2 mile northeast of Gold Spring in September 1887. By 1900 more than 100 claims were located in the region and the area became known for the Stirling Mine. The camp that grew up around these workings established a post office and took the name Stirling (aka Sterling). By 1915, the mines played out and the area only saw sporadic mining into the 1920s.

The earliest industrial use of the Mount Stirling area was for charcoal production in the southern portion of the WSA. With the abundant resource of fuel wood available on the western slope of the Spring Mountains, Nehemia “Red” Clark (no relation to the “Clark” the County was named for) built 3 charcoal ovens in Wheeler Wash in 1875 to provide charcoal for the Jonas B. Osborne’s smelter in Tecopa, California, 50 horse-drawn-wagon miles away. In 1877 a single lime kiln was built at the site to utilize some of the charcoal production to convert crushed local limestone into lime. Osborne greatly expanded his Tecopa smelter operation in 1878 and the entire operation failed and was abandoned by the end of the year. The Tecopa Charcoal Kilns (aka Wheeler Wash Kilns) continued to produce charcoal until 1910. Wood for the kilns was provided by Harsha White, who operated the Clark (aka Younts) Sawmill in Clark Canyon. Over its lifetime, the Tecopa Charcoal Kilns consumed an estimated 5,000 to 6,000 acres of woodlands and timber, mostly in the form of cut branches. The Younts Sawmill also supplied lumber for the Bullfrog Mining District of Rhyolite. 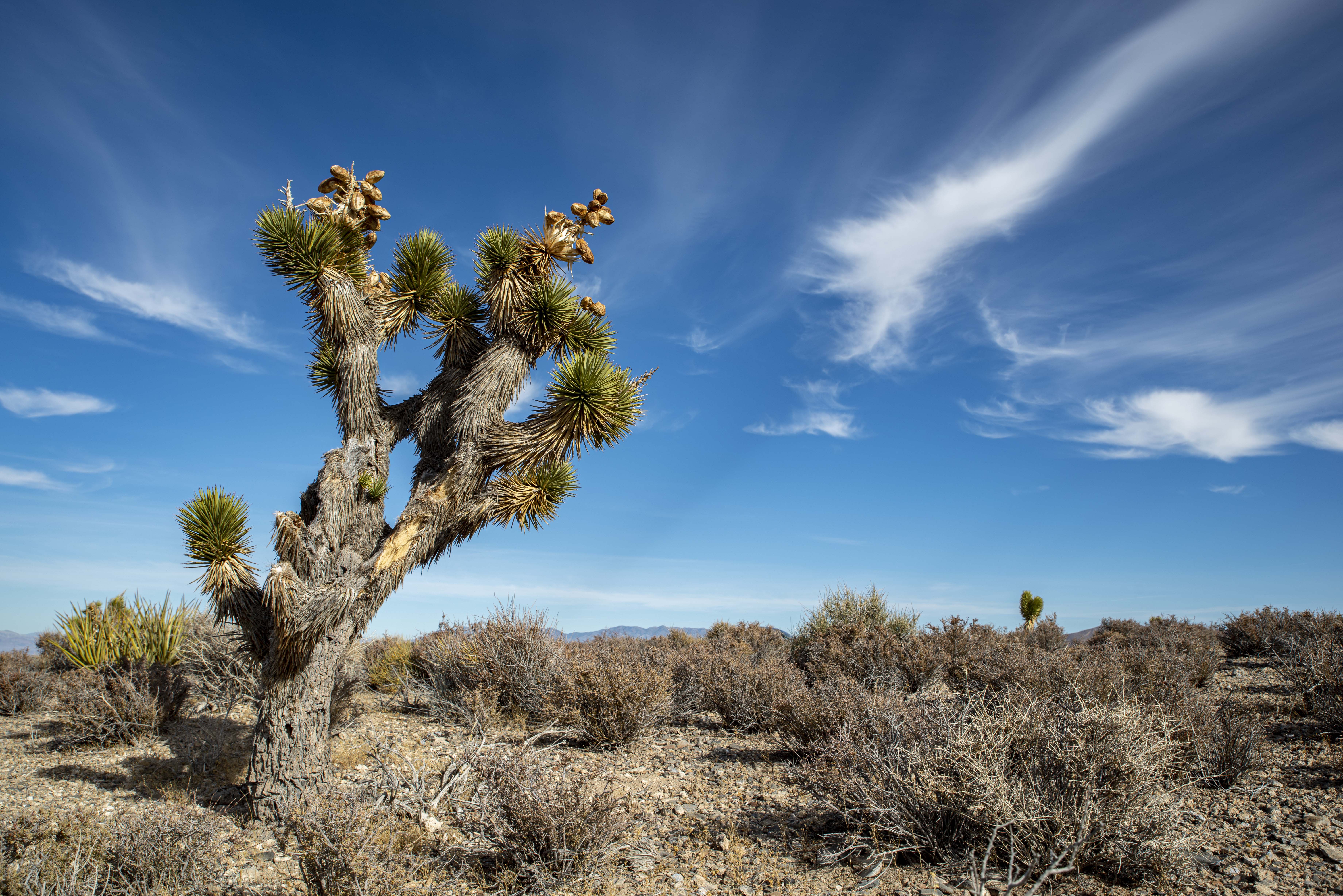 Wildlife
Rocky Mountain Elk were transplanted into the Mount Stirling area when it was part of the Desert National Wildlife Refuge. Today, this only viable elk herd in Clark County, makes part of its home within the WSA. Mule deer, pronghorn, bighorn sheep, mountain lion, bobcat, foxes, and coyotes complete the list of larger mammals. Unusual reptiles include gila monsters and desert tortoise. Birds of note include raptors and road runners.

Plants
Most of the uplands of the Mount Stirling WSA are characterized by a dense pinyon/juniper woodland with associated grasses, cliffrose, and wildflowers. Scattered stand of ponderosa pine trees can be found in several of the deeper canyons. The northern bajada of the addition area includes a stunning example of native Mojave Desert vegetation characterized by yucca, ephedra, creosote, and the Blackbrush plant community.