Mount Charleston has stood sentinel over a long pageant of human history. The earliest indicators of human activity in the area include Clovis and stem spear points found in the Las Vegas Wash. These earliest peoples most likely hunted the remnants of Pleistocene megafauna in the shadow of Mount Charleston during a period of climatic transition between 12,000 and 14,000 years ago. This would have been a time of wetter and cooler conditions than we find in this part of Nevada today. By 5,000 years ago, the climate had transitioned into conditions we would recognize today. The ancient people of this era adapted to more desert-like conditions focusing on industries of hunting, gathering, and processing of native food plants. Atlatls, used to propel spears to hit fleeing deer, bighorn sheep, and rabbits, along with a broad distribution of seed grinding sites indicate a shift to broad desert adaptations. About 1,000 years ago, Ancestral Puebloan people introduced farming and pottery into the region east of Mount Charleston. This was a period of a more settled lifestyle, anchored by farming. By the beginning of the historical era, people of Paiute, Chemhuevi, and Yuman ancestry were document as residing in the area, relying on nomadic hunting gathering and limited farming. The Yuman people are believed to be associated with an intaglio recently recorded south of Las Vegas Wash. Mount Charleston is known as “Nuvant” in the Southern Paiute language and is recognized as sacred cultural origin site for Southern Paiute and Chemeheuvi peoples. Learn more about Indigenoues connections with the land here.

The earliest recorded expedition within the shadow of Mount Charleston was the Spanish exploration led by the two Franciscan priests, Domínguez and Escalante in 1776. Although Mount Charleston is not mentioned by expedition journals, it is certain the explorers would have gazed upon the mountain’s countenance as they followed the Colorado River south along the area now inundated by Lake Mead. It is unfortunate that this expedition also opened up the Southern Paiutes to the predation of the Native American slave trade that followed the Franciscan missions and provided labor to the agricultural industries of California and New Mexico. This slave trade seriously impacted the people of the Moapa and Las Vegas Valleys, forced them away from favorable agricultural lands, depopulated some Southern Paiute bands, and increased their hostility toward and fear of travelers and other outsiders. (Learn more about Ingenious Slavery in Utah and Southern Nevada in the Additional Resources Tab.)

Following the Old Spanish Trail blazed by the Domínguez-Escalante Expedition 35 years earlier, Jeddediah Smith brought his explorers briefly into what would become Nevada in 1826. Peter Ranne, a member of Jedediah Smith's traveling party, was the first known man of African descent to enter the boundaries of the modern state of Nevada. Ranne is listed in the company's records as a “man of color.” Unlike York of the Lewis and Clark expedition, Ranne was not enslaved but was a free person of color—records indicate that he received pay equal to that of the other members of the party.

After working as a trapper trapper near Santa Fe, New Mexico for a decade, William Wolfskill become a naturalized Mexican citizen. In 1831, he followed the Old Spanish Trail into the Las Vegas Valley and pioneered a northern spur to the trail that crossed over the southern end of the Spring Mountains, roughly following the route of Hwy 160, just north of Potosi Mountain. Along this route, Wolfskill and his fellow travelers would have had spectacular views of the southern flanks of Mount Charleston.

During the 1850s, the Old Spanish Trail became the Mormon Road, which brought settlers and other travelers to the area. Increased Euro-American settlement displaced the Southern Paiute from long-used agricultural, foraging, and hunting lands. These lands rapidly became depleted of wildlife and native food plants by livestock grazing and larger farming operations. Interactions with Mormon settlers increased so that by the 1870s the majority of Southern Paiute had direct contact with Euro-Americans. In 1869, the Army Corp of Engineers topographical survey bestowed the name Mount Charleston on the highest summit of the Spring Mountains to honor the town of Charleston, South Carolina. 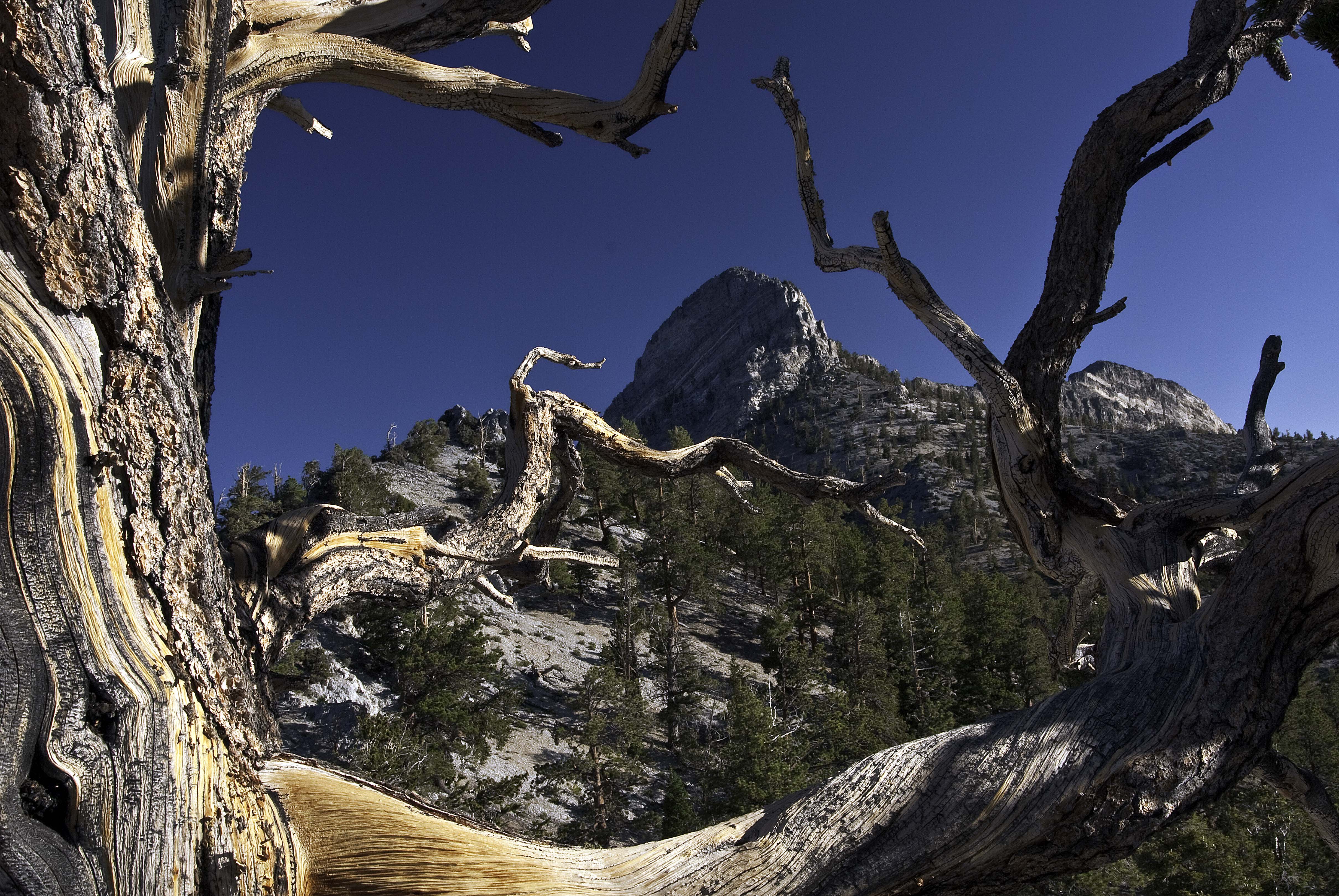 Geology
The Mount Charleston Wilderness is composed of a 30,000-foot pile of limestone that accumulated in a westward-deepening sea between about 520 million and 280 million years ago. The fossilized remains of brachiopods, sponges, corals, crinoids, gastropods and other marine organisms are still visible in limestone outcrops throughout the Spring Mountains, including at the summit of Griffith Peak. Near the end of the Paleozoic Era, as sea level dropped as an epoch of subduction began as the seafloor began to plunge beneath the westward drifting North American continent. During the Triassic, rivers piled sand and mud atop the limestone and gypsum. As the climate dried out during the Jurassic, sand dunes blew across the landscape. Those dunes were later buried by younger sediments, cementing the loose sand to form the Aztec Sandstone. Intensification of subduction during the late Mesozoic eventually squeezed southern Nevada’s rocks and thrusted the older limestones up and over the Aztec Sandstone and other Mesozoic rocks along the Keystone and other thrust faults. This inverted landscape today creates the spectacular steep limestone cliffs and walls we see today in the wilderness, towering more that 10,000 feet above the 200 million-year-newer sandstones found in the red rocks at the base of the mountains.

Mount Charleston: An Island in the Sky
Rising nearly 12,000 feet from the floor of desert valleys to the summit of Mount Charleston, the Spring Mountain represent four ecozones, that is equivalent to driving from Mexico to Alaska. Starting with desert shrublands, where the primary vegetation is creosote bush, blackbrush and, in slightly higher elevation areas, Joshua trees, you will quickly move into the low conifer zone dominated by evergreen pinyon pine and juniper trees as you move up in elevation. Above this level, coinciding with the most popular Mount Charleston hiking areas, is the high conifer zone featuring ponderosa pine trees, white fir trees, and bristlecone and limber pines at the upper reaches of this zone. There are many mountain in the Great Basin which support stands of bristlecone pines. Mount Charleston, however, features a true bristlecone pine forest. Above the treeline, above 11,000 feet, you will find a fragile alpine plant zone that has evolved in isolation, more than 130 miles from nearest mountains with similar elevations.

Like true ocean isolated islands, Mount Charleston, isolated by more than 100 miles of desert on all sides, has evolved its own endemic species of plants and animals- organisms found no where else. Seven of these endemic species are butterflies. These butterflies feed have thrived for centuries in mutualistic relationships with flowering plants, some of which are also endemic. Examples include Clokey’s thistle, rough angelica, Torrey’s milkvetch and the mountain oxytrope, the latter two on which the Mount Charleston blue butterfly feeds. This is how island ecology works. The Palmer’s chipmunk is another species endemic to the Spring Mountains, a cheery little fellow guaranteed to enchant hikers in the Wilderness. There are an estimated 28 species of plants, animals and insects found on Mount Charleston and nowhere else in the world.

Wildlife
The biological diversity of animal life in the Spring Mountains is astounding. Bird watchers will find a paradise with more than 130 species described within the region. Fans of flying mammals will discover more than 18 species of bats spending time in the Spring Mountains over the cycles of seasons. Rabbits and rodents are very well represented in the Wilderness. Mule deer, desert bighorn sheep, pronghorn, and an occasional elk my be spotted in the Spring Mountains. Elk were initially introduced from Yellowstone National Park into the Spring Mountains in the 1930s when they were part of the Desert Game Range (today's Desert National Wildlife Refuge). Predators include coyote, bobcat, grey fox, mountain lion, badger, western spotted skunk, ring-tail cat, long-tailed weasel, and the tiny dwarf shrew, who preys on insects.

Plants
The extreme diversity of ecozones combined with the biological diversity of the Mojave Desert creates conditions within the Spring Mountains that support over 700 species of plants. The list would be exhaustive and we will not subject you to that in this space.