Archaeological evidence shows Native Americans have lived and thrived in the shadow of Great Basin National Park since the end of the Pleistocene. Just how often they visited and utilized the resources of the park and especially the upper elevations over these intervening 14,000 years cannot be definitively known. But what is clear, for anyone who is blessed to live within the view-shed of a magnificent mountain such as the South Snake Range, is the profound emotional and psychological impact of having a towering summit like Wheeler Peak as part of your daily activities. Watching the play of light from sunrise to sunset, the rotation of the stars, and the march of seasons up and down the mountain creates a sense of place and connection like no other.

Ethnohistorical and ethnographic evidence shows that the ancestors of the Shoshone/Goshute have traditionally used the greater Great Basin National Park region for countless generations, and continued to utilize the area for subsistence needs and cultural purposes ever since they they were forcibly removed from the area. The first recorded EuroAmerican expedition to the South Snake Range in 1855 documented Native Americans in the area and even in the vicinity of the highest summit (see Additional Resources tab and Tyranny of Renaming). The early maps of the South Snake Range (Military Map 1, 1869) show the area of the future national park surrounded by “Indian Rancharias” or settlements. In 1938, Julian Stewart documented more than a dozen Shoshone/Goshute village sites in the Spring Valley west and north of the future park, a few in the Snake Valley to the east. The entire area is considered sacred by the Shoshone/Goshute people and is integral to the stories of their ancestors, history, and present life ways. The Swamp Cedars, just north and west of Great Basin National Park, is an extremely unique ecological site and significant cultural site for the Shoshone/Goshute people. This is the location of multiple generations of seasonal Native American gatherings, and tragically also the site of battles, massacres, and atrocities that resulted in the removal of the Shoshone/Goshute people from the area. The Swamp Cedars (Bahsahwahbee in Shoshone) was known to be of such significance to the early EuroAmerican explorers, that it appeared on the earliest state maps of Nevada (although its position seems to be mis-located on the 1867 Map below). 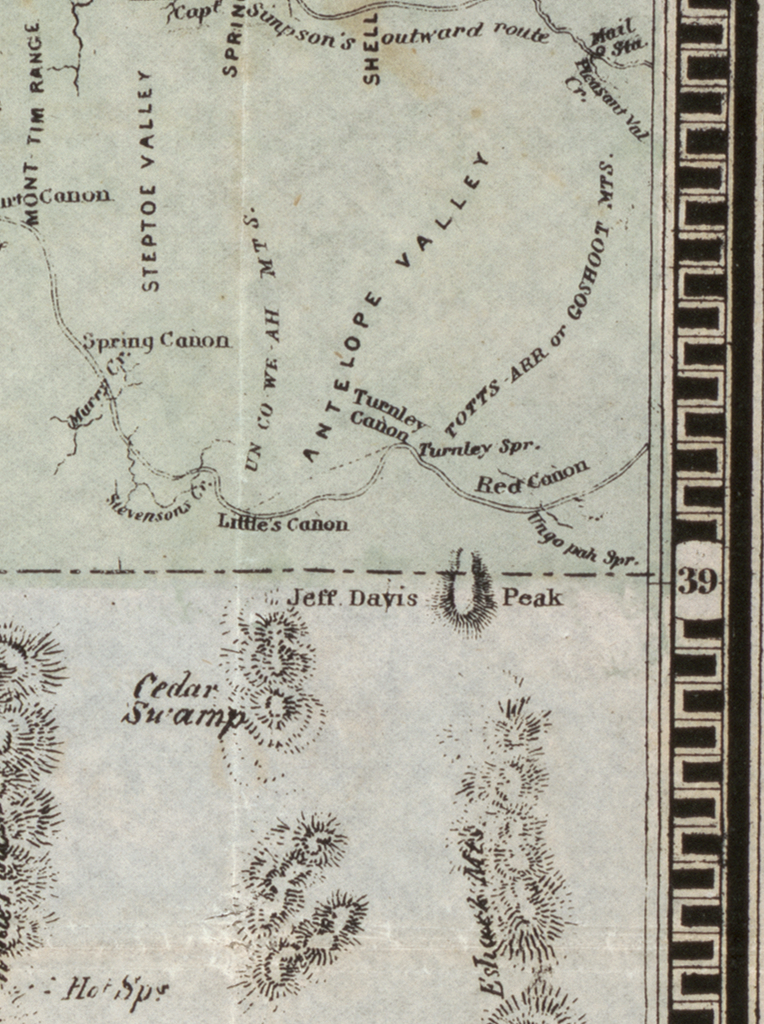 Many people believe that the development of the Spring Valley adjacent to the Swamp Cedars, like the industrial wind generating facility, is disrespectful of Traditional Cultural Property of the Shoshone/Goshute people. The story of discrediting and removal of Native people from their homelands is the oft told narrative of successful foreign invaders who believe that the people they displace have no rights and are only impediments to be overcome in their quest for domination and exploitation of the land they seize and subjugate. (See the Tyranny of Renaming on the Additional Resources tab.) 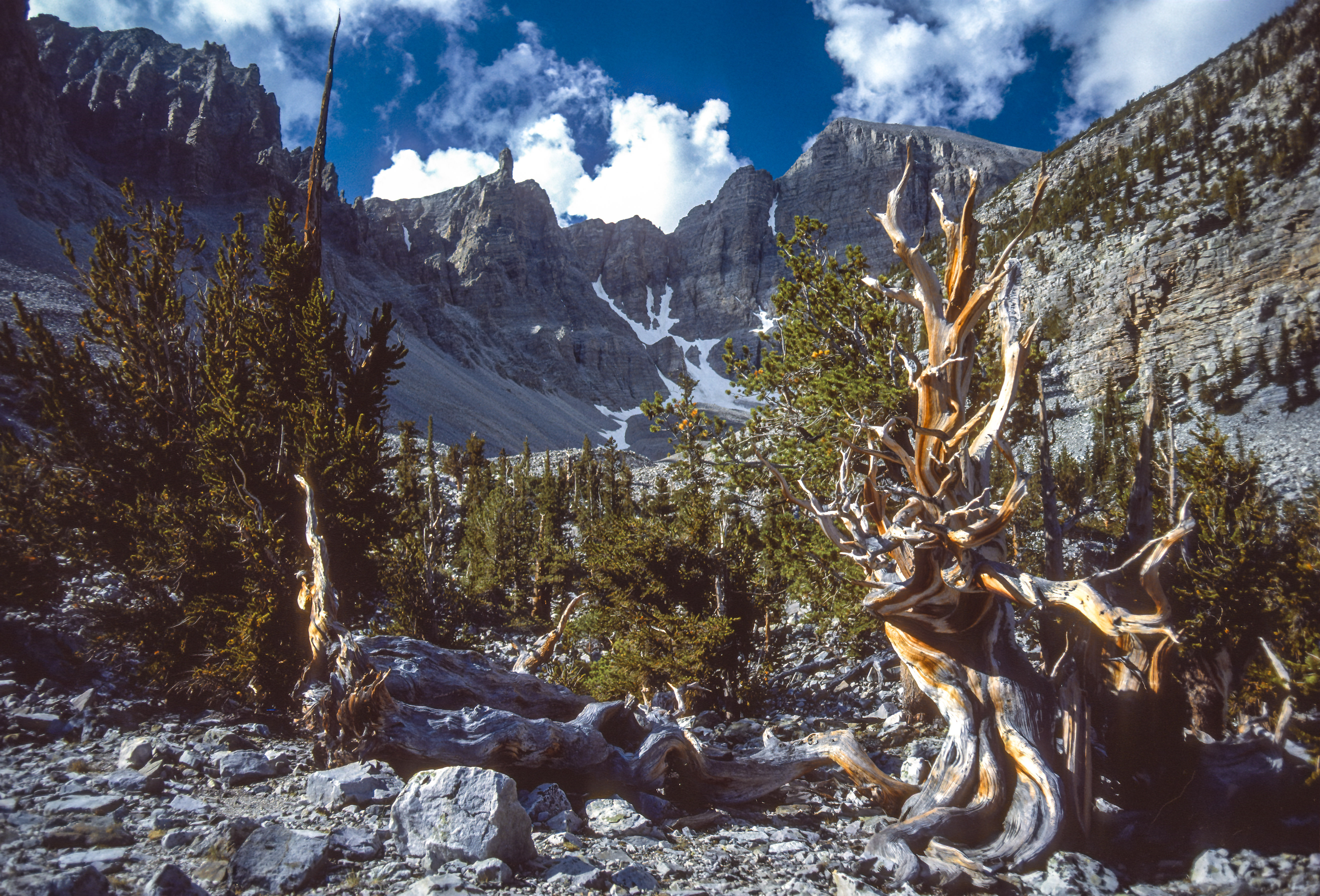 See the Additional Resourses Tab for a deep-dive into the conservation history of this area.

The Great Basin National Park NPS website has extensive information about the Natural History and Resources of the Park. 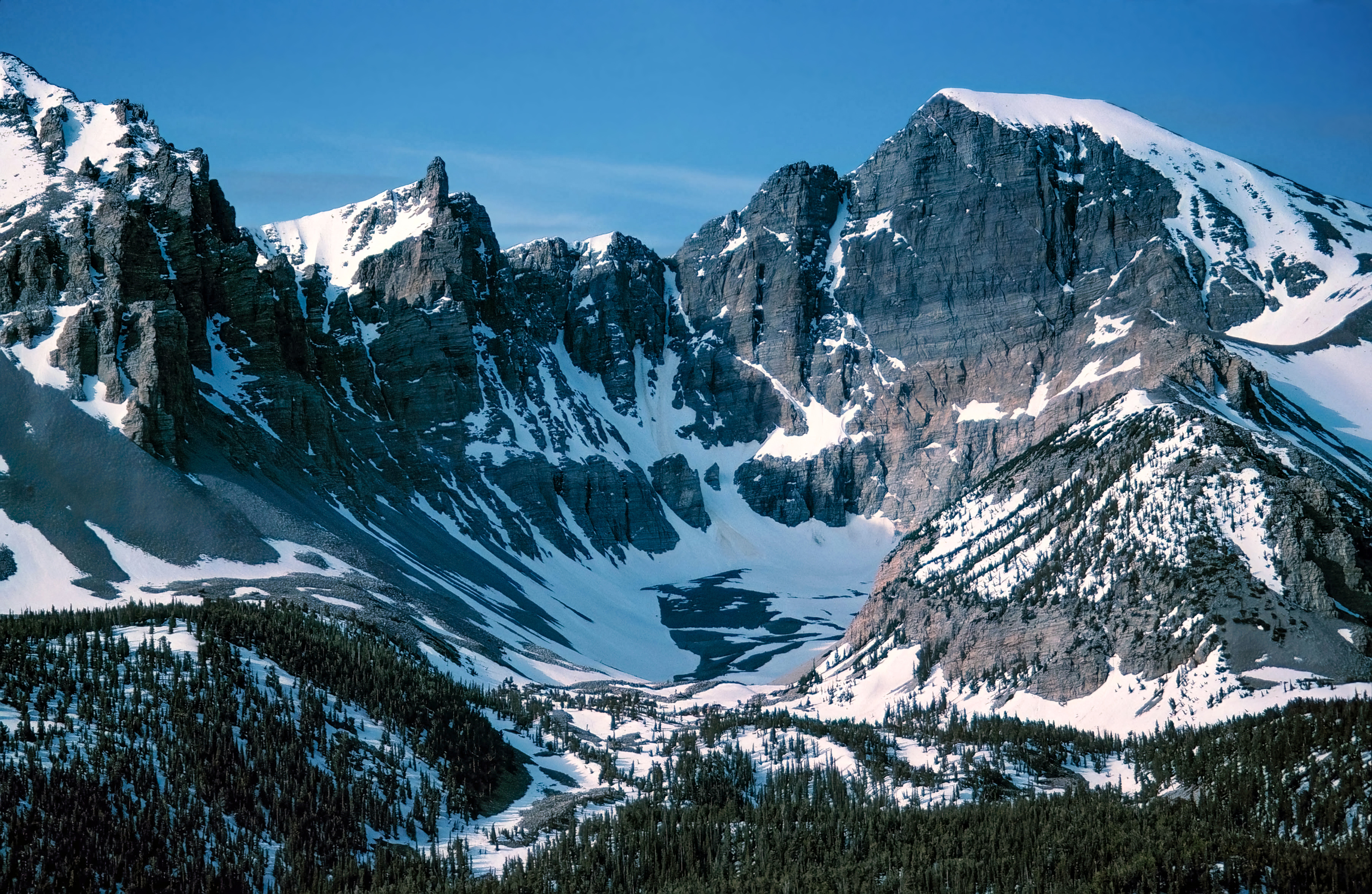 The First Recorded EuroAmerican in the vicinity of GBNP

Jedediah Smith cast his eyes on the towering heights of the South Snake Range as he crossed over Conner Canyon on June 18th 1827. He camped on the east side of the Spring Valley at a water source he found with the help of a small group of 14 Native Americans. One of the Native Americans also hauled water back to a member Smith’s party who had collapsed a little way back, unable to go any further. They soon caught up with Smith’s group and the Native Americans gave Smith’s three men two ground squirrels and showed them how to collected and prepare tule, which Smith and his starving men enjoyed. The next day Smith traveled northeast to be able to follow Sacramento Pass between the North and South Snake Ranges and camped on the evening of June 19th near the present NV UT border on the southeast side of Mount Moriah. The following evening, June 20th, found Smith camping on the east side of Mount Moriah, possibly in the vicinity of Hampton Creek. Once again his camp was visited by Native Americans who brought squirrels to barter for trinkets with Smith. Smith records that they at least had some acquainted with products of the white world as they had “iron arrow points” and “some beads.” At this camp, Smith waxed poetically about the mountain landscape he had just passed through:

“In this part of the plain almost all the the high hills have snow on their tops. But for these snowy Peaks the country would be utterly impassible as they furnish almost the only grass or water of this unhospitable land. They are to this plain like the islands of the Ocean. Rising but a short distance from sandy base the snowy region commences which is an evidence of the great elevation of this plain.”

One cannot but think that Smith was reflecting on the towering heights of both Wheeler Peak and Mount Moriah as he recorded these observations. It is also interesting to note that Smith was the first EuroAmerican to grapple with the idea that the numerous mountains of Nevada represented ecological “islands” within the desert aspect of the Great Basin. June 21st, Smith spent his last day traveling through Nevada and he camped that night in Utah at Gandy Salt Marsh. His journal entry for that evening included disparaging criticism of the Native Americans he encountered in this part of Nevada:

“I endeavored to learn from those indians by signs something in relation to the distance and course to the Salt Lake. But from them I could get no satisfaction whatever for instead of answering my sign they would imitated them as nearly as possible. After vexing myself for some time with those children of nature I left them and continued on my way. All the indians I had seen since leaving the Lake [Walker Lake] had been the same unintelligent kind of beings. Nearly naked having at most a scanty robe formed from skin of the hare peculiar to the plain which is cut into narrow strip and interwoven with a kind of twine or cord made apparently from wild flax or hemp. They form a connecting link between the animal and intellectual creature and quite in keeping with the country in which they are located.”

This then, was the first recorded EuroAmerican assessment of the Shoshone/Goshute people in this region of Nevada and would serve as the foundation of a Western white dogma that would rationalize and justify the genocide and displacement of Native American peoples throughout Nevada. The irony is that Smith was criticizing the “Indians” for their lack of understanding him, instead of his own ignorance and racial bias that prevented him from understanding the Shoshone/Goshute people and their relationship to the Great Basin. Smith was so blinded by his own prejudices that he could not recognize that he was looking at a culture and traditions that thrived for over 14,000 years in a region that he could only classify as “unhospitable land.” Ultimately, Smith was so unprepared and unfamiliar with Nevada’s landscape and resources that on multiple occasions his life and those of his men would have surely perished without the intervention, charity, and guidance of these “unintelligent kind of beings.” (See the Tyranny of Renaming on the Additional Resources tab for more information about the early EuroAmerican explorations.)