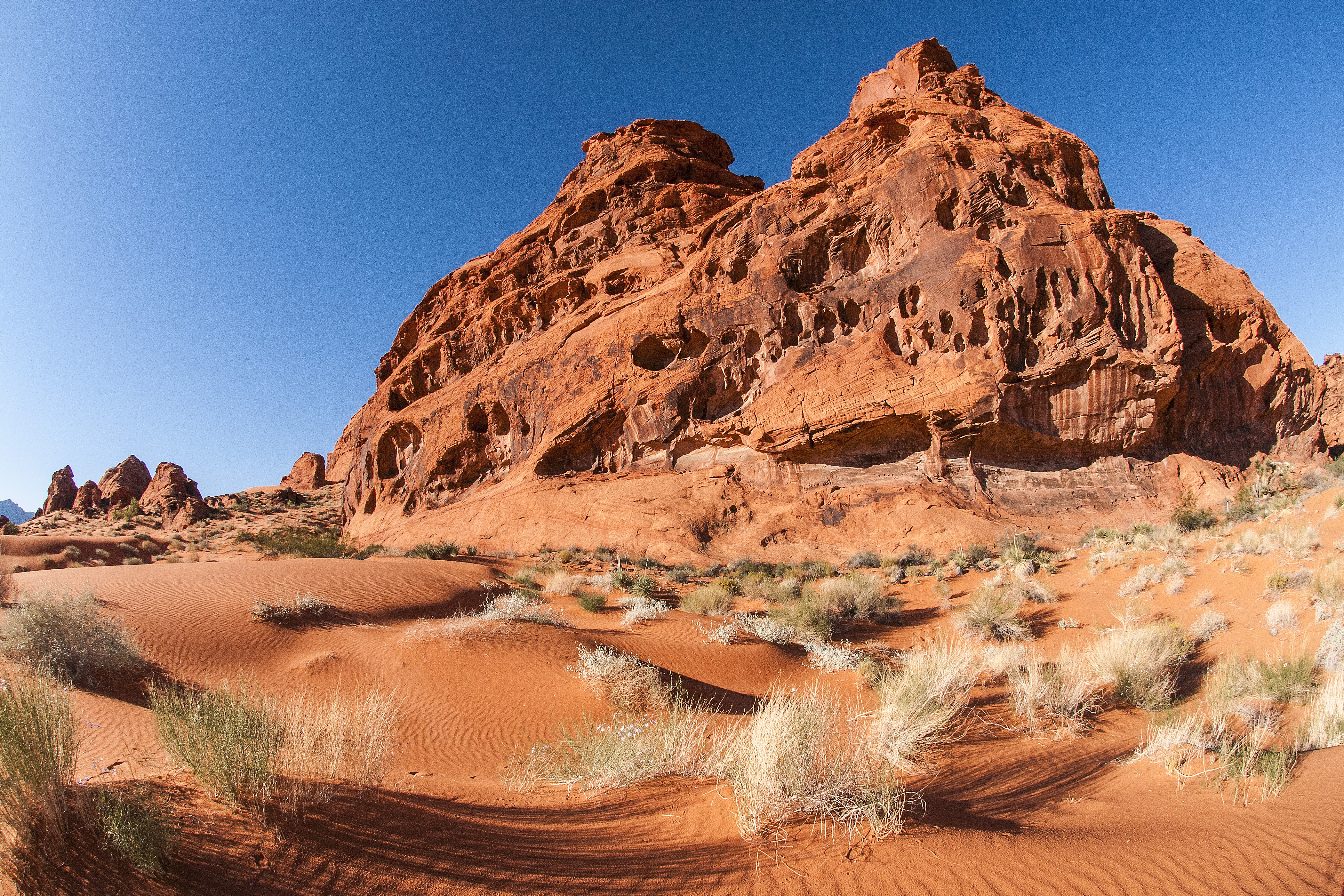 Traveling from Interstate 15 from Las Vegas, take Exit 112 (Riverside/Bunkerville) and go south; cross the bridge over the Virgin River and turn west on the first road past the bridge.

CAUTION: Most roads in Gold Butte require a 4 wheel drive vehicle with high clearance. Make sure you have spare tires, extra gas, a detailed map, and extra food and water in case you break down. There is no cell phone service in the area. Always be prepared for changing conditions, stay on designated routes, and practice leave no trace principles. The Gold Butte area is a highly sensitive and culturally rich area - follow all rules and regulations! Removing, touching, or vandalizing cultural, historical, and natural sites is illegal. 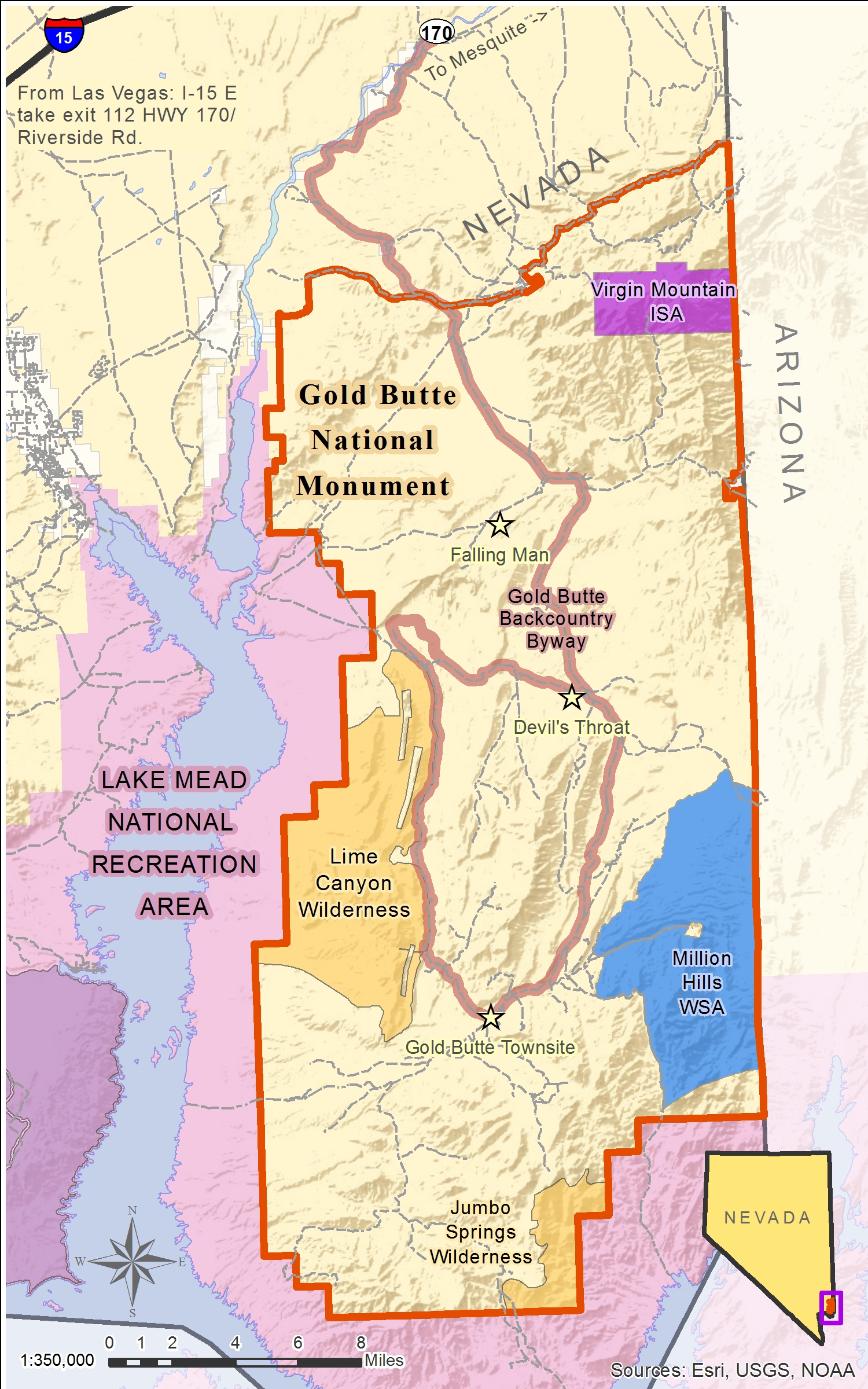 The area is sacred to the Moapa Band of Paiute Indians and the Las Vegas Paiute Tribe and includes thousands of petroglyphs, and traces of human habitation, such as agave roasting pits and shelters, dating back over 12,000 years. While individual petroglyphs sites are important individually, they derive their sacred nature from their relationships to other sites — through physical and spiritual trails and histories that connect them. Gold Butte National Monument recognizes this landscape of interconnections. 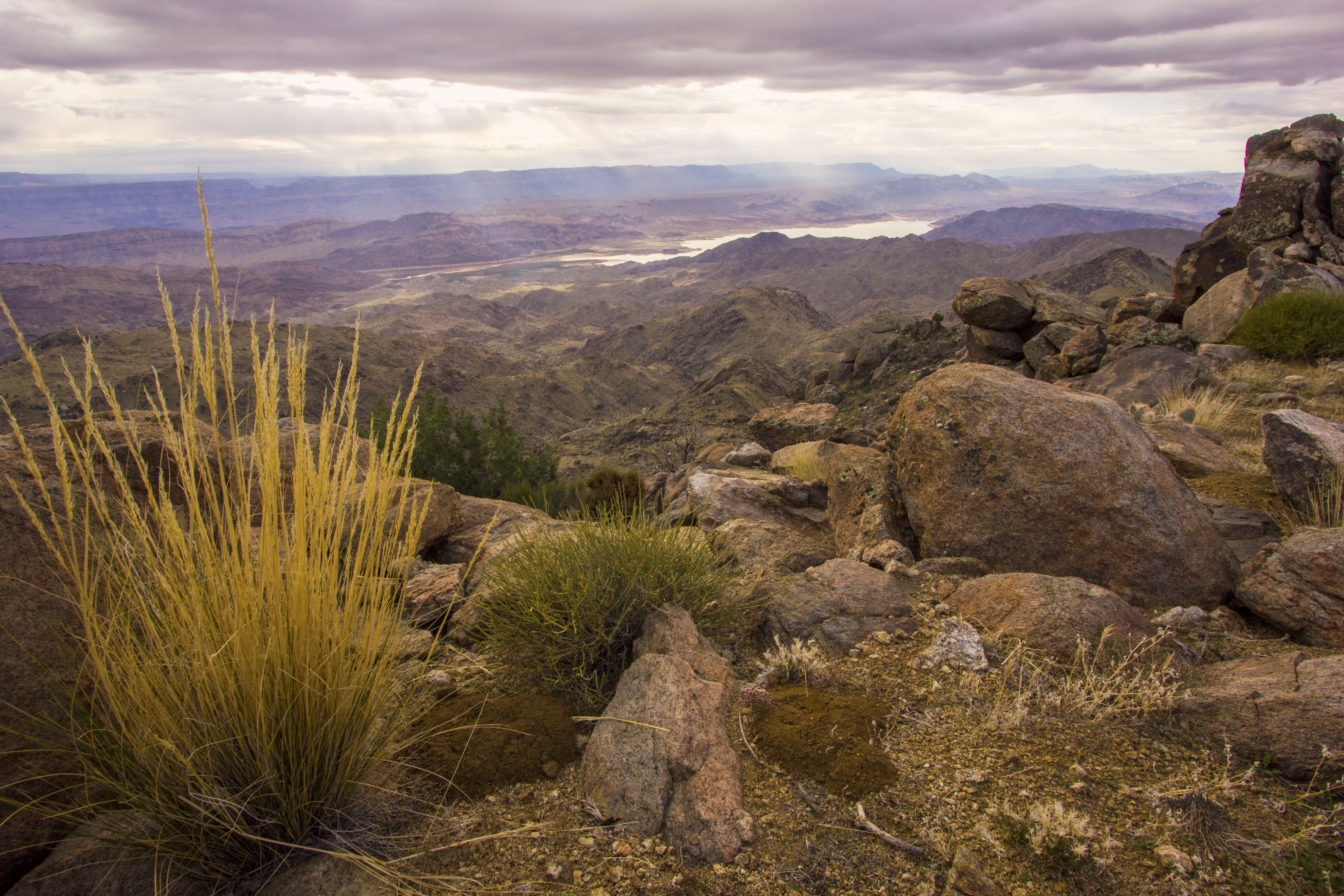 Wilderness Within the National Monument 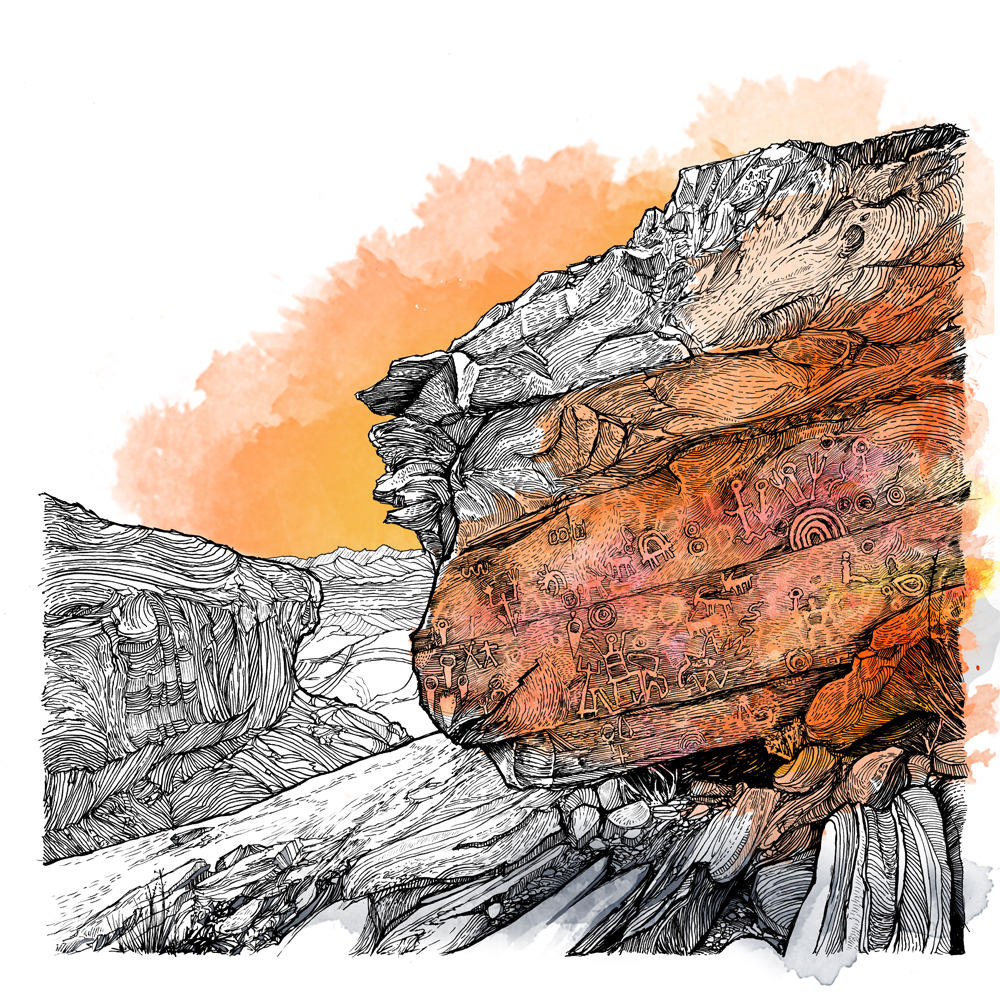 Studies have repeatedly shown that national monuments support local economic growth. Counties in the West with protected lands, like national monuments, have a competitive advantage in attracting new businesses and fast-growing economic sectors like tourism and recreation. For example, from 1996 to 2008, in the Grand Staircase-Escalante Region population grew by 8%, jobs grew by 38%, real personal income grew by 40%, and real per capita income grew by 30%. More than 100 economists recently urged the president to protect public lands to assist with our economic recovery.

An economic study by Applied Analysis found that if just 10% of new visitors to Gold Butte decided to spend the night in Mesquite, the total economic impact for the community would be $2.7 million per year.

The journey to achieve protection started with the administrative designation of Gold Butte as an Area of Critical Environmental Concern by the Bureau of Land Management in 1998, recognizing the nationally significant historic, cultural, wildlife and scenic values of the area. In 2002, Gold Butte received two designated Wilderness areas - Jumbo Springs and Lime Canyon. Wilderness was a great first step but did not address management issues like preventing the accelerated destruction of important biological and cultural resources that make up Gold Butte.

Since then, hundreds of activists in Nevada joined by local businesses, legislators, and city officials have strongly advocated for permanent protection of Gold Butte. 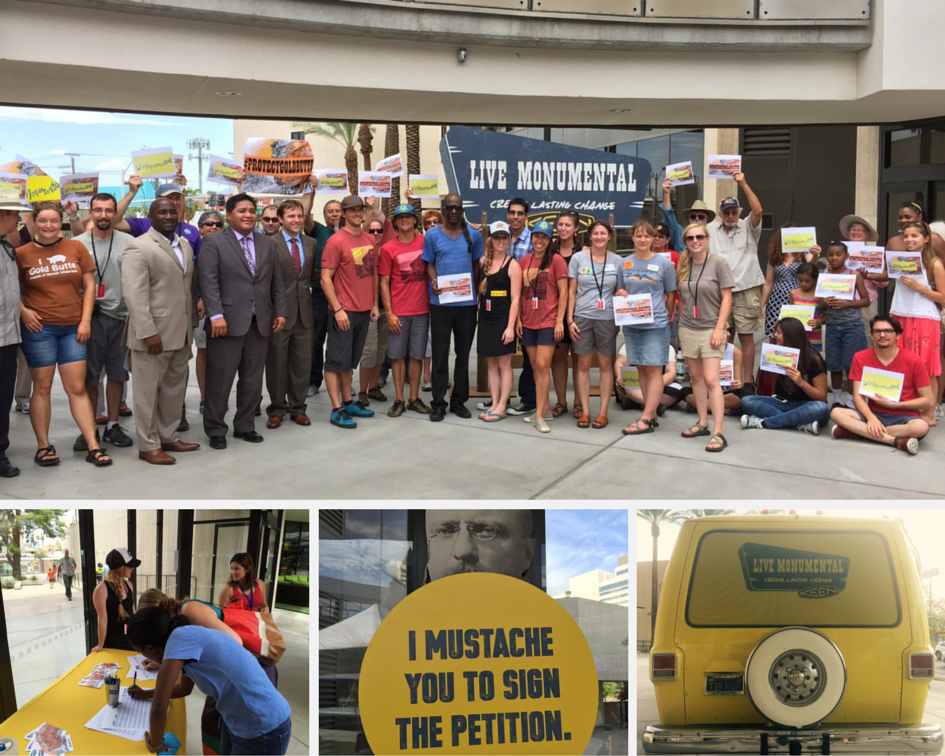 In 2015, KEEN Footwear launched their national Live Monumental campaign, designed to advocate for the permanent protection of places like Gold Butte.

In the November of 2015, Congresswoman Titus hosted a tele-town hall where hundreds of community members listened to the result of and asked question about the Applied Analysis’ research, illustrating the economic benefits to Southern Nevada if Gold Butte was permanently protected.

Senator Reid in 2016 cited a strong desire to protect Gold Butte during the last year of his term and strongly advocated the Obama administration to protect Gold Butte via the Antiquities Act. This point was accentuated by a passionate floor speech delivered on April 7th highlighting recent damage at Gold Butte and the need for executive action and his August 18th press conference. 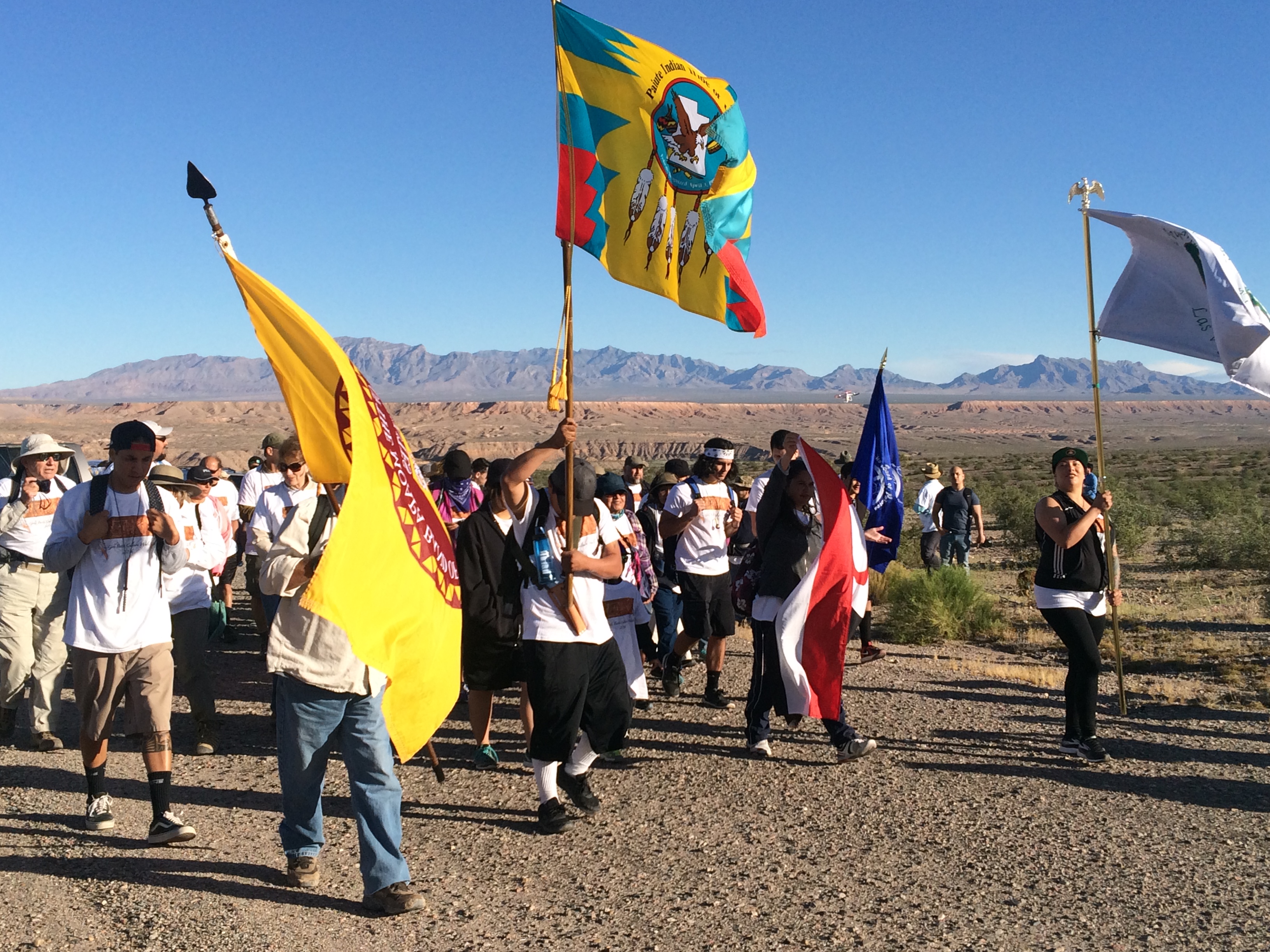 Also in April, the Moapa Band of Pauites staged a culture walk in Gold Butte to advocate for permanent protection of the area.

On December 28, 2016, President Obama heeded the call by designating Gold Butte as a National Monument through the Antiquities Act. Read the Presidential Proclamation here.

What is a national monument?

A national monument is a land or historical place that's been protected by Congress through legislation or by the president through the use of the Antiquities Act.

National monuments can be managed by any of the several federal land management agencies, including the National Park Service, U.S. Forest Service, U.S. Fish and Wildlife Service, or the Bureau of Land Management.

What can you do in a national monument?

The Gold Butte designation preserves public access, such as for hunting and fishing, which continue to be managed by the state of Nevada. Traditional tribal collection of certain natural materials will still be allowed in the monument, as will access for other cultural uses. Visitors may continue to use motorized vehicles and nonmotorized mechanized vehicles (e.g. mountain bikes) on roads and trails designated as open for their use.

What is the Antiquities Act?

Signed into law by Republican President Theodore Roosevelt in 1906, the Antiquities Act has since been used by 16 presidents (8 Republicans and 8 Democrats) to create more than 140 national monuments.  Places such as the Grand Canyon and the Statue of Liberty are an irreplaceable and integral part of our country’s heritage and were initially protected using Antiquities Act authority.

The Antiquities Act is a bedrock conservation law for our nation and vital for protecting our nation’s natural, cultural, and historic heritage. Friends of Nevada Wilderness is working with Nevada’s Members of Congress and advocates around the nation to defend this Act. Learn more here.