Save the Desert National Wildlife Refuge! 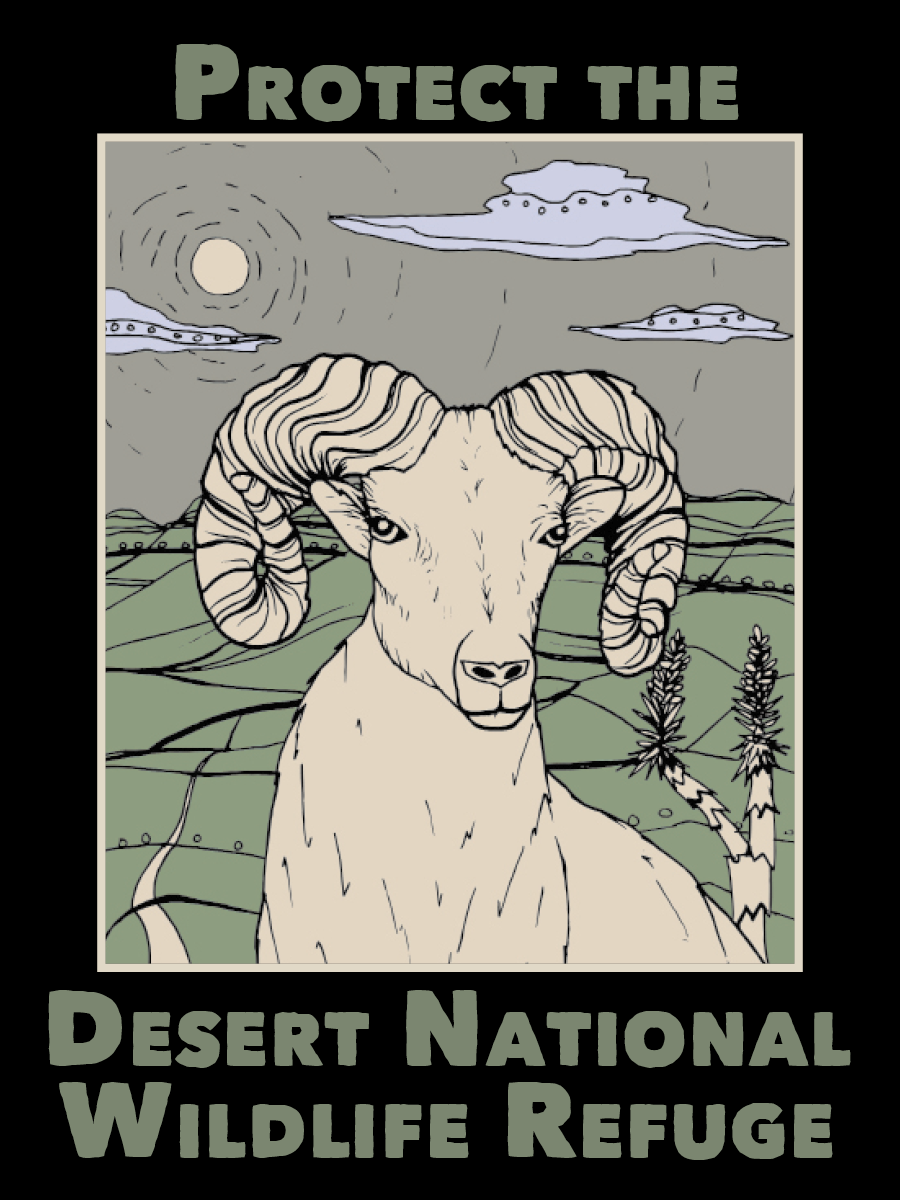 On July 21, 2022 after months of Senator Cortez Masto and her staff working to improve the southern Nevada bill she introduced early in 2021, Clark County pulled out saying there wasn't enough disposal of public lands and other development pieces remaining in the bill. The bill, which was to have had a mark up hearing was pulled off the list by the Senator. It is our plan to continue to work with the Senator's office on our highest priority which has always been the protection of the Desert National Wildlife Refuge from military expansion and closure to the public.

The fight will continue and we still need your support to protect the bighorn and all the other creatures that call the Desert Refuge home. With your continued help we have created awareness with our #dontbombthebighorn social media campaign, taken our elected officials and their staff on tours, worked with great photographers to showcase the beauty and importance of the refuge through images, partnered with BackCounty Pictures for the production of the amazing Desert Refuge videos, walked the halls in Washington DC talking to our delegation and key, attended many meetings, reviewed, analyzed and commented on the NTTR LEIS, and helped form a large coalition with national regional and local groups all fighting for the refuge.

On March 3, 2021 Senator Cortez Masto and Congresswoman Titus along with the entire Nevada delegation introduced the Southern Nevada Economic Development and Conservation Act (S 567 and HR 1597) that would have provided permanent protection for the Desert National Wildlife Refuge. 1.3 million acres are to be designated as Wilderness and will be strong protection from military expansion further into the refuge!  Click to read a text of the bill and a map is available here. 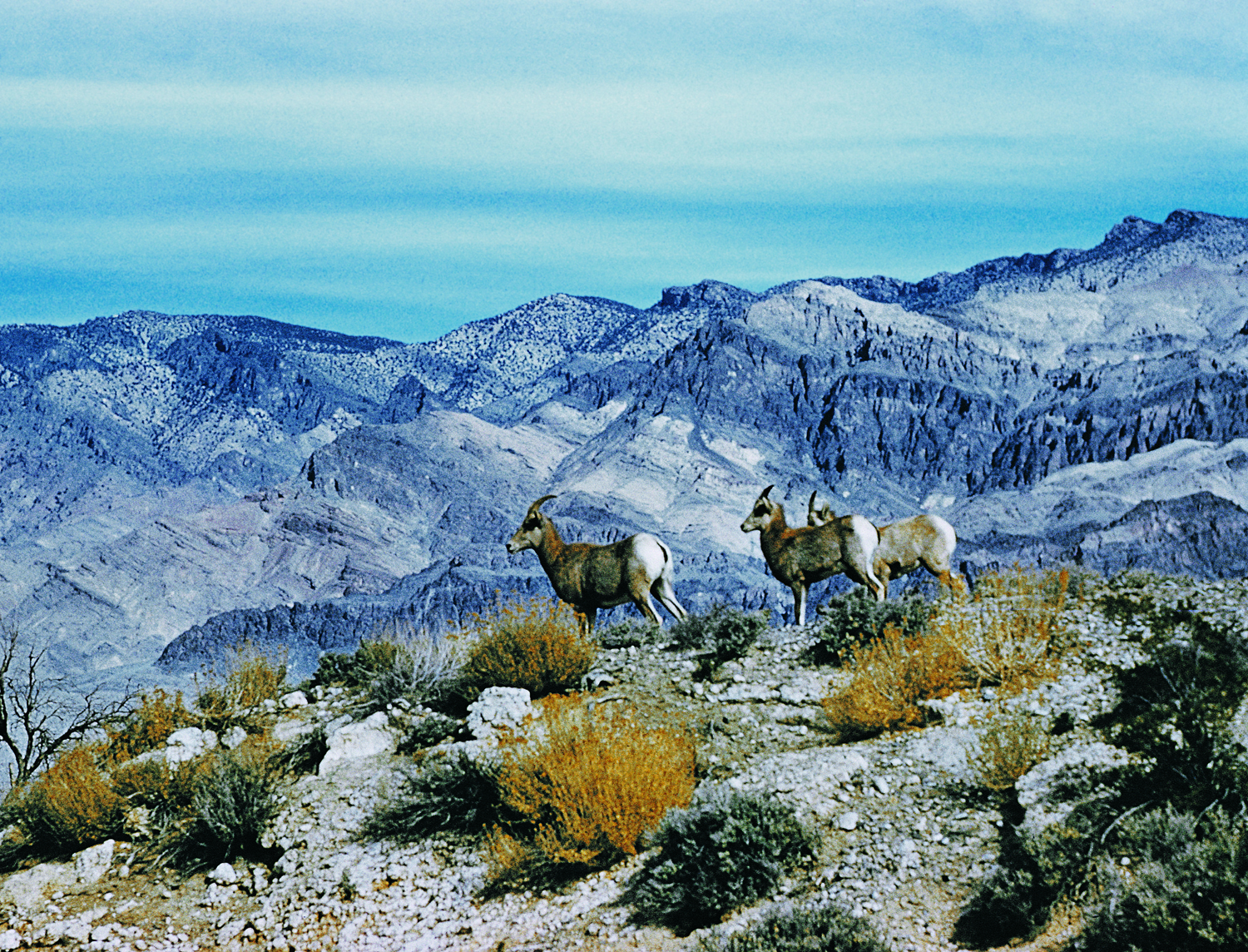 At the end of 2020 we had great news of temporarily protection for the Desert Refuge.  There was no military expansion into the Desert Refuge as part of the 2021 National Defense Authorization Act.

Congress voted in support of the NDAA in early December 2020 and the negotiated language was a 25-year status quo extension of what the Nevada Test and Training Range (NTTR) currently has. President Trump vetoed the NDAA and Congress overrode his veto at the end of the year.

A HUGE thanks for the years of support getting us to this point. “We welcome this news with a mix of great relief and lingering anxiety. We are incredibly grateful to our Congressional delegation, particularly Senator Cortez Masto and Congressman Horsford, for helping to deny any Nevada military facility expansion onto public lands in the 2020 NDAA. At the same time, we know this is a temporary reprieve. The military will not back down from its desire to take over valuable habitat like the Desert National Wildlife Refuge and fence out the public. But we won’t back down from our goal which has always been to secure permanent protection for and access to our public lands that remain abundantly wild and retain the highest of conservation values. We will build on that victory and prepare with even greater energy and resolve for the next round, which we know is coming. The military will be back, and so will we.”

On July 1, 2020, the House Armed Services Committee approved a markup of H.R. 6395, the National Defense Authorization Act. Section 2845 of the legislation would have had disastrous implications for the Desert National Wildlife Refuge, effectively handing control of over 800,000 acres of the Desert National Wildlife Refuge to the United States Air Force for military training. There was NO consultation with the Nevada delegation or Congressman Steven Horsford, whose District includes the Desert Refuge. Thanks in part to the outrage from people across Nevada, the Nevada delegation fought back. Representatives sent a joint letter urging House leadership to protect the Desert Refuge. In an article by Daniel Rothberg of The Nevada Independent, the representatives voiced their displeasure with the amendment and the lack of consultation. The Wilderness Society released an analysis recommending Section 2845 be stricken in its entirety.

A massive campaign across the nation erupted to Save the Desert Refuge and the media went wild.  The Nevada delegation engaged majorly and a new amendment arose (the Horsford Amendment) – this got rid of the bad parts of the Bishop Amendment and kept the good pieces. Through a complicated House Rules Committee process on July 17th the Horsford Amendment moved in a package to the House floor and was voted on and passed unanimously on July 20, 2020.

On July 9, 2020 Governor Steve Sisolak requested congressional leaders axe the last-minute provision snuck into the defense authorization bill, that would have given the Air Force the final say over how more than 800,000 acres of protected land are managed at the Desert Refuge. In a letter addressed to Rep. Raúl Grijalva, the chair of the House Natural Resources Committee, and Rep. Adam Smith, the chair of the House Armed Services Committee, Sisolak made it clear that this provision “clearly undermines Nevada’s ability to effectively manage wildlife and natural resources within our state borders.” For more on Sisolak's response, check out this Nevada Independent article by Daniel Rothberg.

On June 11, 2020 the Senate Armed Services Committee proposed NO EXPANSION for the Nellis Test and Training Range! Just a status quo renewal of what they have for another 20 years.  It was a great step toward saving the Desert National Wildlife Refuge. 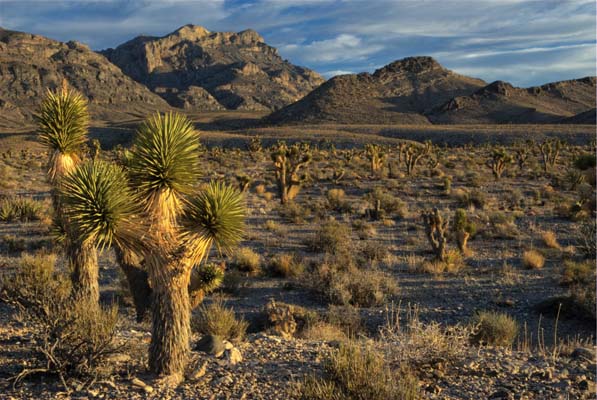 Protection of the Desert Refuge is a giant step closer thanks to you.

On December 19, 2019, Senator Cortez Masto introduced S-3145, the Desert National Wildlife Refuge and Nevada Test and Training Range Withdrawal and Management Act, that pushed back hard against the massive military overreach into the Desert National Wildlife Refuge. Friends of Nevada Wilderness has been fighting for the Desert Refuge for the last 5+ years. Congressman Horsford introduced the House companion bill and the entire Nevada delegation signed on. This bill would've designated 1.3 million acres of Wilderness (the biggest Wilderness bill to date in Nevada) and stopped the military from turning the refuge into a bombing range and destroying precious habitat. The bill would've keep the historic Alamo Road open to the public and would prevent the military from taking anymore primary jurisdiction of the refuge.  We are deeply appreciative of Senator Cortez Masto’s leadership and the support from the entire Nevada Delegation.

Thanks to all the folks who turned out in large numbers to attend the hearings in March. Everyone spoke in favor of the resolutions! The resolutions were quickly and unanimously passed out of the committees.

DON'T BOMB THE BIGHORN: The desert bighorn sheep thank you for your outpouring of support for them and for their home in the Desert National Wildlife Refuge throughout the military's Legislative Environmental Impact Statement process!

At the end of 2016, the military started a scoping process, notifying the public that they were seeking to extend the NTTR withdrawal with additional possible alternatives.  They accepted comments on this scoping document, which were to be used an input to a draft of proposed alternatives to management for the Desert Refuge.  Read Friends of Nevada Wilderness' submitted letter here.

Hundreds of people turned out to the military's public meetings in January 2018 and 32,000 official comments went into the military opposing their expansion proposal. The Final LEIS for the proposed expansion of the NTTR into the Desert Refuge was released October 26, 2018.  The military submitted their Final LEIS proposal to the armed services committees in Congress in April 2020.  It would gut the Desert Refuge and shut out the public. 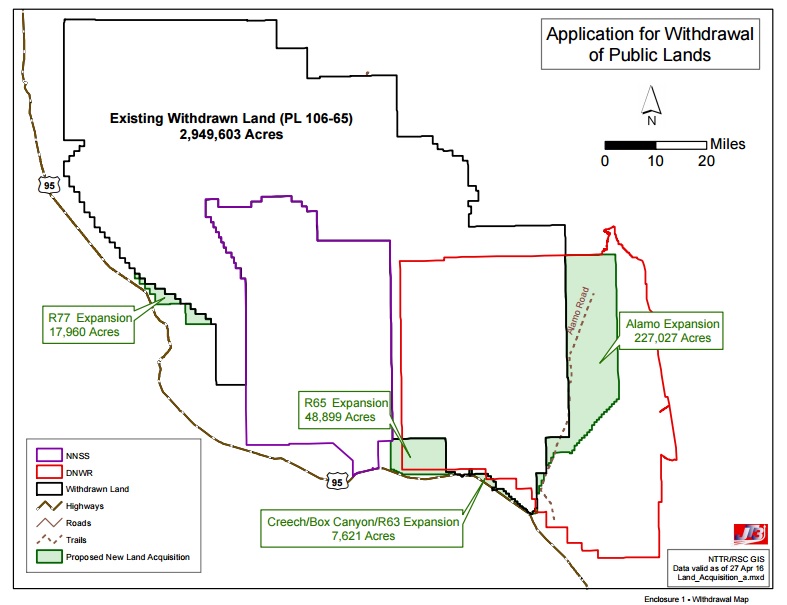 Military attempts to seize much of the Desert Refuge though the National Defense Authorization Act were thwarted!

Attempts to transfer more than 800,000 acres of the Desert Refuge to the military for use as bombing ranges for the Nevada test and Training range were made in 2015 and 2016.  Amendments were placed in markups of the National Defense Authorization Act each year, then eventually failed due to the efforts of Senator Reid, Congressman Heck, and countless activists.

If you haven't already, please sign our Save The Desert petition to our Nevada Congressional Delegation.  We're also urging all opponents of this expansion to directly contact your elected representatives.  Let's tell them #DontBombTheBighorn!! 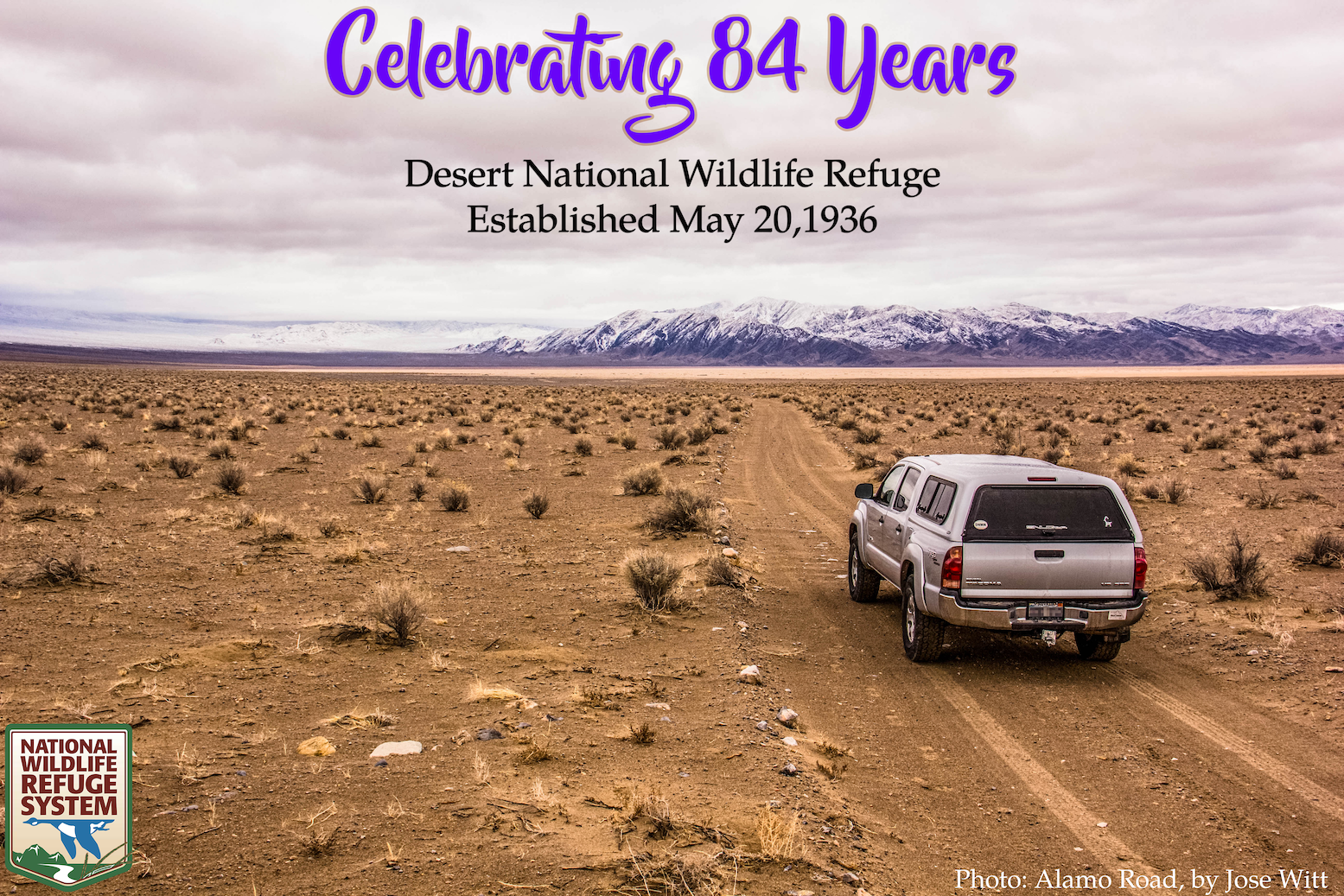 About The Desert National Wildlife Refuge

The Desert National Wildlife Refuge, just outside the city lights of Las Vegas, is nearly 1.6 million acres and home to one of Nevada’s largest desert bighorn sheep populations. In 1971, about 1.2 million acres of the Desert Refuge were proposed as Wilderness by the US Fish & Wildlife Service. Immediately threatened by the possibility of military expansion is the broader Sheep Range Proposed Wilderness (Sheep Range, Las Vegas Range, Gass Peak).

In the 1940's, the military gained joint administration with the U.S. Fish and Wildlife Service of the western half of the Refuge. This eliminated public access and called any future wilderness designation for that portion of the Refuge into question. Now, the Air Force is looking to seize control of most of what's left of the Desert National Wildlife Refuge. This would not only threaten wildlife and indefinitely close public access, it would remove the possibility of future wilderness designation for the area. Most of the Refuge was recommended for Wilderness in the 1970’s by the U.S. Fish and Wildlife Service and it is up to us to make sure these high quality wild lands do not become lost forever! The Air Force is currently seeking public comment. It is critical you voice your concerns and oppose any transfer of the Desert National Wildlife Refuge to the military.

Click here to read more about the military's jurisdiction over the Desert Refuge, and what's at stake if they intrude further on refuge lands. 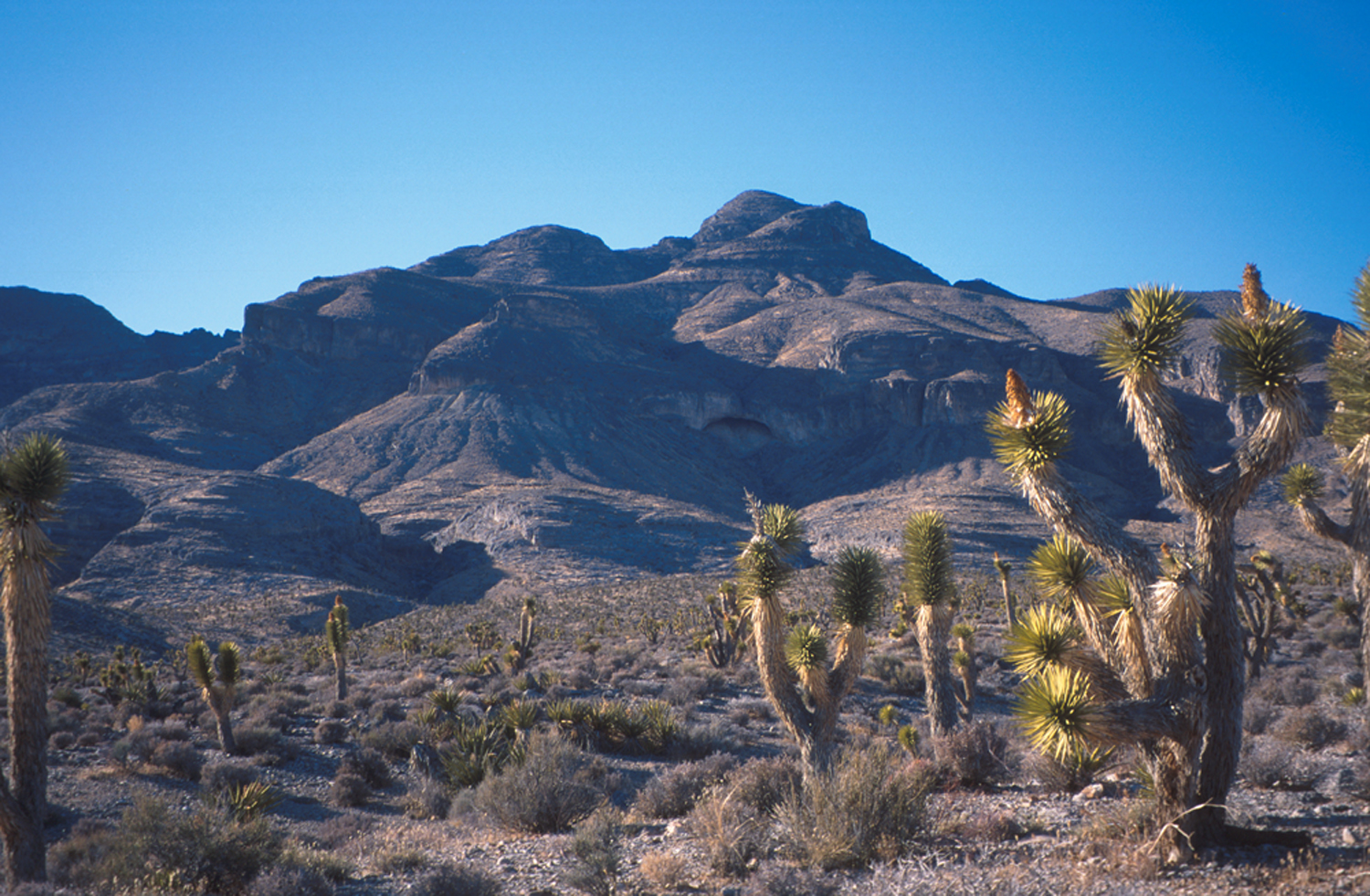 Originally protected in 1936 by President Franklin D. Roosevelt to provide habitat for the iconic desert bighorn sheep, the Desert National Wildlife Refuge is the largest wildlife refuge in the contiguous United States. Encompassing six major mountain ranges and nearly 1.6 million acres in Nevada, it provides the highest quality, intact habitat for desert bighorn sheep and other wildlife that depend on Great Basin and Mojave Desert ecosystems. With the exponential growth of Las Vegas over the past decades reaching right up to the refuge boundary, this haven for wildlife is critical.

Since the Refuge was established, the U.S. Fish and Wildlife Service has managed the Refuge to protect its rich biological diversity and wildlife habitat, maintain the integrity of the recommended wilderness areas, and safeguard invaluable cultural resources. The military already controls millions of acres of land in Nevada and they have unlimited ability to fly over the Refuge for training purposes. We have already sacrificed enough of the Desert Refuge, it is time to make a stand for what remains.

Please stand up for one of our nation’s most precious resources – The Desert National Wildlife Refuge with its large tracts of undisturbed wild lands that provide invaluable habitat for threatened, sensitive, and endangered wildlife species.

Desert Companion: By Land and By Air