May 20, 1936: President Franklin D. Roosevelt established the Desert Game Range for “the conservation and development of natural wildlife resources” (EO 7373). The 2.25 million acre Desert Game Range, under the joint administration of the Bureau of Sport Fisheries and Wildlife (now the US Fish and Wildlife Service [FWS]) and General Land Office (now the Bureau of Land Management [BLM]), included most of the lands within the current Desert National Wildlife Refuge boundary, but also stretched south to include parts of what is now the Spring Mountains National Recreation Area and Red Rock Canyon National Conservation Area.

February 18, 1929: A 320-acre ranch at Corn Creek was acquired from a private landowner under the authority of the Migratory Bird Conservation Act. This site became the administrative headquarters for the Game Range and is now home to the Desert Refuge Visitor Center.

October 1940: The military gained joint administration (aka management) with the FWS of the western half (approximately 846,000 acres) of the Desert Game Range.  These lands were reserved for the use by the War Department (now the US Department of Defense [DOD]) for an aerial bombing and gunnery range (now the Nevada Test and Training Range [NTTR]).  The US Air Force’s use of a portion of the Desert Game Range was governed by a Memorandum of Understanding (MOU) signed in 1949.

August 31, 1966: Public Land Order 4079 established the Desert National Wildlife Range under the sole administration of the Bureau of Sport Fisheries and Wildlife (now the FWS). It also reduced the size of the refuge to 1,588,000 acres.

1971: 88% (1,443,100 acres) was identified and recommended as Wilderness by the FWS under the Wilderness Act of 1964 due to the area’s extensive primitive and roadless qualities. Seven individual Wilderness units were identified in this process.

1999: The Military Lands Withdrawal Act of 1999 (PL 106–65) extended the Air Force’s withdrawal on the 2,919,890-acre Nevada Test and Training Range for 20 years. These lands were reserved for use by the Air Force: “...as an armament and high hazard testing area; (B) for training for aerial gunnery, rocketry, electronic warfare, and tactical maneuvering and air support; (C) for equipment and tactics development and testing; and (D) for other defense-related purposes...” This withdrawal overlays approximately 845,787 acres of the Desert Refuge.  In addition, it transferred primary jurisdiction of 112,000 acres of bombing impact areas on the Desert Refuge from the FWS to the military.  However, the FWS retained secondary jurisdiction over these lands.  All military withdrawn lands are closed to general public access.

November 6, 2002: President George W. Bush signed the Clark County Conservation of Public Land and Natural Resources Act of 2002 (PL 107–282), which administratively transferred management of 26,433 acres of public lands adjacent to the eastern boundary of the Desert Refuge from the BLM to the FWS

2015: An attempt to transfer all of the Desert Refuge that overlaps with the NTTR to the military was made through as amendment was placed in the 2016 National Defense Authorization Act (NDAA).  The amendment eventually failed due to the efforts of Senator Reid, Congressman Heck, and countless activists.

Spring 2016: The military made a similar attempt to use the 2017 NDAA to transfer all of the Desert Refuge that overlaps with the NTTR to the military.

Late 2016: At the end of 2016, the military started a scoping process, notifying the public that they were seeking to extend the NTTR withdrawal with additional possible alternatives.  They accepted comments on this scoping document, which were to be used an input to a draft of proposed alternatives to management for the Desert Refuge.  Read Friends of Nevada Wilderness' submitted letter here.

2018:  Hundreds of people turned out to the military's public meetings in January and 32,000 official comments went into the military opposing their expansion proposal. The Final LEIS for the proposed expansion of the NTTR into the Desert Refuge was released October 26, 2018.

2019: The 80th session of the Nevada Legislature passed Assembly Joint Resolution 2 with nearly unanimous bi-partisan support.  This resolution opposed the military expansion into more of the Desert National Wildlife Refuge.

December 19, 2019: Senator Cortez Masto introduced the Desert National Wildlife Refuge and Nevada Test and Training Range Withdrawal and Management Act (S 3145), that pushed back hard against the massive military overreach into the Desert Refuge. This bill would designate 1.3 million acres of the Desert Refuge as Wilderness and stop the military from turning the refuge into a bombing range and destroying precious habitat.

April 2020: The military submitted their Final LEIS proposal to the armed services committees in Congress. It would gut the Desert Refuge and shut out the public.

July 1, 2020: The House Armed Services Committee approved a markup of the 2021 NDAA (HR 6395) that included an amendment sponsored by Rep. Bishop (UT) that would effectively hand over 800,000 acres of the Desert Refuge to the military. There was no consultation with the Nevada delegation or Congressman Steven Horsford, whose District includes the Desert Refuge.

July 9, 2020: Governor Sisolak requested congressional leaders axe the last-minute provision snuck into the defense authorization bill last week, that would give the Air Force the final say over how more than 800,000 acres of protected land are managed at the Desert Refuge. In a letter addressed to Rep. Raúl Grijalva, the chair of the House Natural Resources Committee, and Rep. Adam Smith, the chair of the House Armed Services Committee, Sisolak made it clear that this provision “clearly undermines Nevada’s ability to effectively manage wildlife and natural resources within our state borders.”

June 11, 2020: The Senate Armed Services Committee proposed no expansion for the NTTR in their version of the NDAA, just a status quo renewal of what they have for another 20 years.

July 20, 2020: Thanks in part to the outrage from people across Nevada the Nevada delegation sought back and sent a joint letter urging House leadership to protect the Desert Refuge. A new amendment arose (the Horsford Amendment), which got rid of the bad parts of the Bishop Amendment and kept the good pieces. Through a complicated House Rules Committee process on July 17th the Horsford Amendment moved in a package to the House floor and was voted on and passed unanimously on July 20.

2021: Senator Cortez Masto and Congresswoman Titus, along with the entire Nevada delegation, introduced the Southern Nevada Economic Development and Conservation Act (S 567 and HR 1597) that would provide permanent protection for the Desert National Wildlife Refuge. 1.3 million acres would be designated as Wilderness, providing strong protection from military expansion further into the Desert Refuge! 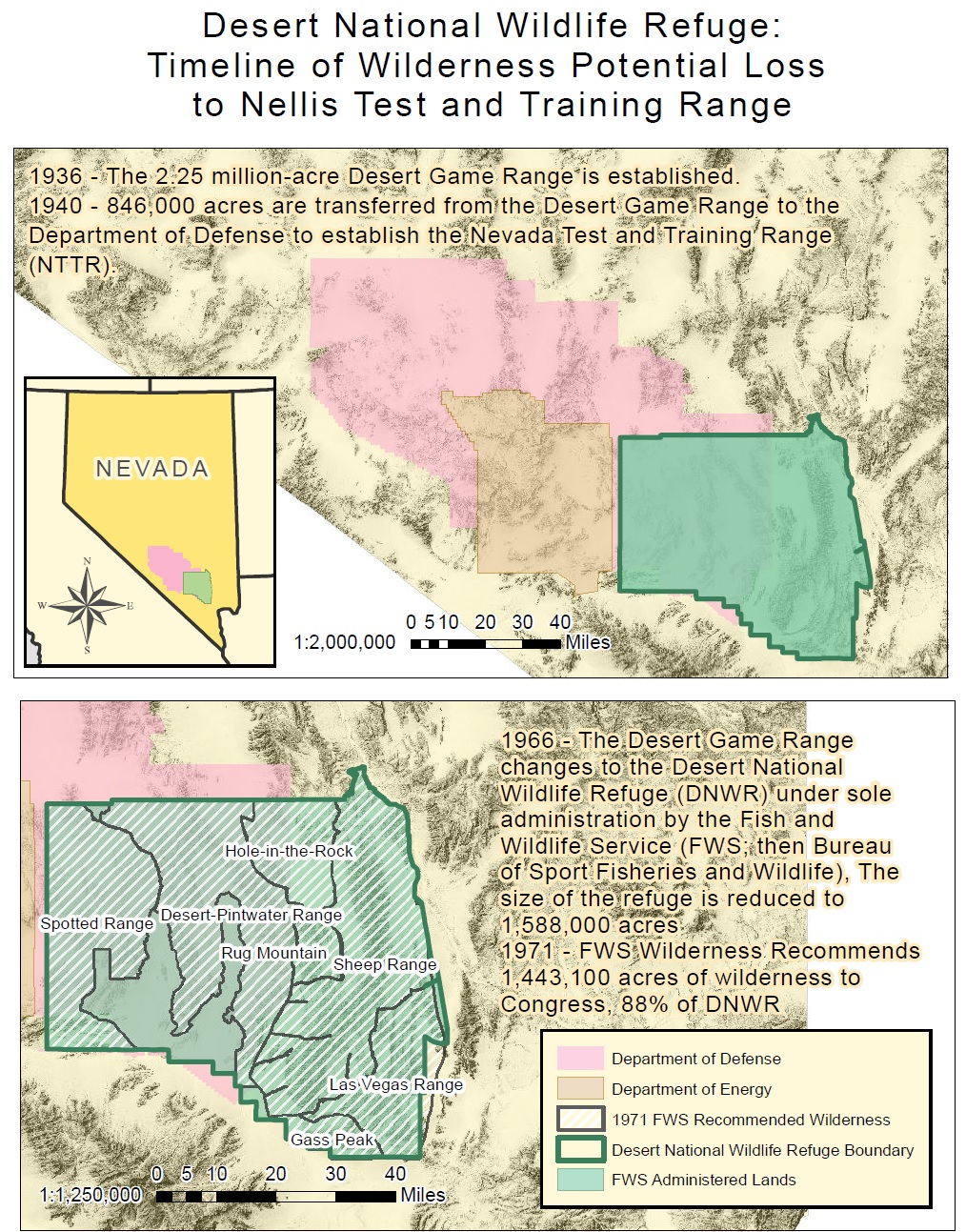 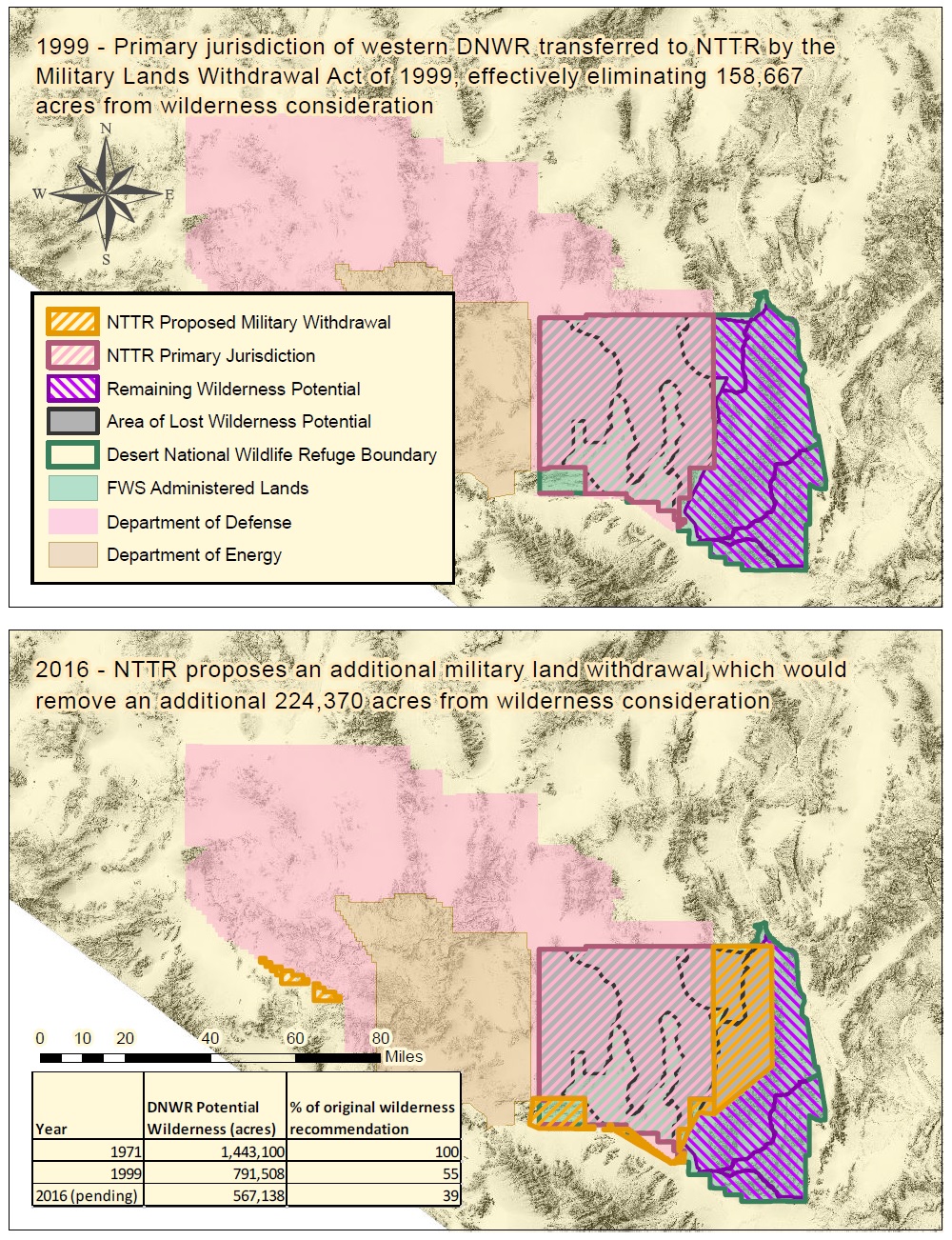 DOD: US Department of Defense

FWS: US Fish and Wildlife Service, also known as the Service

USC Sec: Code of Laws of the United States of America, Section