Interior Secretary Ryan Zinke's long awaited visit to Nevada's National Monuments was cut short in lieu of an emergency cabinet meeting. A Monday meeting was previously scheduled between the Secretary and his staff and public lands advocates which included elected officials, Tribal members, business and community leaders. This meeting, however, was abruptly cancelled in light of a Washington DC shake up. Unfortunately, public land advocates did not get the chance we desperately wanted to dialogue with Secretary Zinke in favor of Basin & Range and Gold Butte National Monuments. But we are a resilient bunch! A last minute press conference was held to address the community's concerns with Secretary Zinke's modified visit to Nevada. 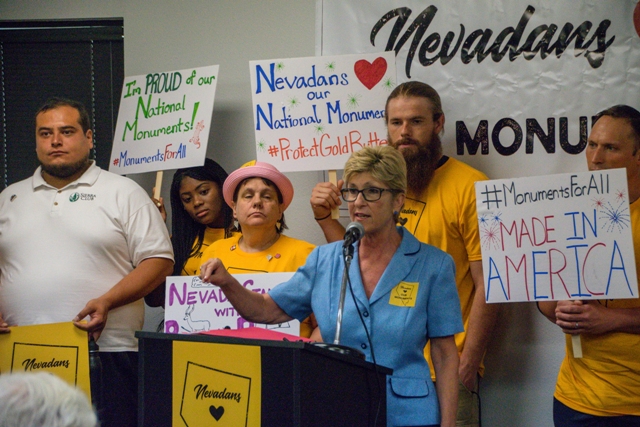 "Get your hands off our monuments! Period.", Commissioner Chris Giunchigliani declared Monday.

Battle Born Progess and the Nevada Conservation League hosted another press conference, this time to give a platform for the community to voice their disapproval of Zinke's scheduled Nevada appearances and peculiar disapperance. Opening speaker, Representative Dina Titus, claimed that Secretary Zinke's visit was little more than a "political event" as he toured with party candidates and local leaders but snubbed a chance to learn about Nevada's National Monuments from the conservationists who worked for the last 10 years plus to protect Gold Butte and Basin & Range National Monuments.

The shock of the cancelled meeting still lingered among the would be attendees and supporters in attendance. County Commissioner Marilyn Kirkpatrick urged Monument supporters to "keep the pressure up" on Washington DC. Approximately 7 out of 10 Nevadans were in favor of our National Monuments designations. With a majority in favor of keeping our Monuments in tack, President Trump and Secretary Zinke are in for a long hard fought battle if they want to take public lands out of the public's hands. Patrick Naranjo, UNLV Intersection Resource Coordinator, and Terri Rylander, Mesquite business owner and member of Friends of Gold Butte also spoke in favor of #MonumentsForAll. Senator Ruben Kihuen, who has been a vocal public lands advocate, released a statement via twitter expressing his disappointment in Secretary Zinke dodging his meeting with local stakeholders. This movement is definitely a cross-section of Nevadans

The disappointment soon turned to overwhelming optimism as the press conference concluded. Politicians, business owners and public lands supporters all feeling rejuvenated in our mission to keep our National Monuments, vowed to keep fighting. As the yellow t-shirts, posters and stickers display, "Nevadans ❤ Our Monuments." We will keep up the fight for as long as it takes! If, by chance, you missed the rally, check it out below streamed from Protect Nevada's FB page.