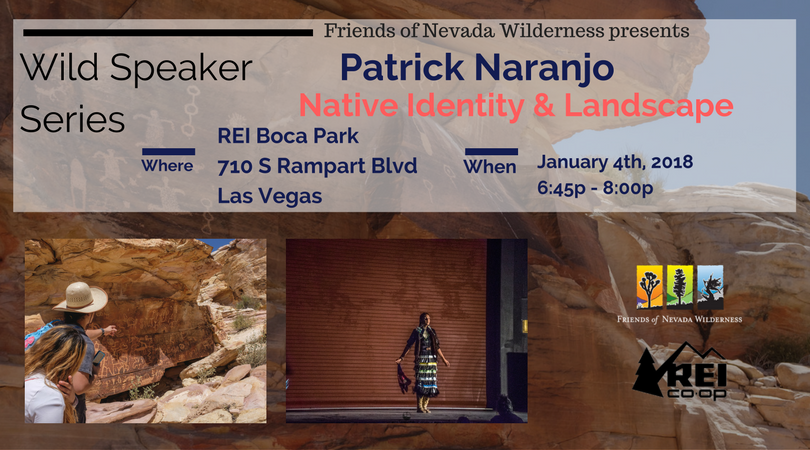 Join us as we welcome Resource Coordinator for UNLV's The Intersection Patrick Naranjo for a presentation about Native American cultural history and how the Antiquities Act has provided protection for these sites Nationwide.

The Antiquities Act of 1906 resulted from a combination of interests. Politicians wanted to preserve prehistory as a form of national heritage; anthropologists and archaeologists were interested in Native American societies, past and present; and cultural institutions sought to gather material collections of interest and value to the public. Politicians recognized an international trend toward the preservation of archaeological sites, in particular Britain's Ancient Monuments Act (1882) and Mexico's Law of Archaeological Monuments (1897).

With dozens of protected sacred sites, no state has a greater percentage of federal land than Nevada, which is 85 percent federally owned, and is the ancestral location to the Paiute, Shoshone, & Washoe peoples-which are reaffirmed by their sovereign status as the 27 tribes in Nevada.

Mr. Naranjo will discuss how the cultural aspects that support the establishment of The Antiquities Act (the identification, and design of  heritage items, and sacred sites ) which authorizes the President of the United States to designate as national monuments any historic landmarks, historic and prehistoric structures, and other objects of historic or scientific interest. The Basin and Range & Gold Butte National Monuments both provide vital habitats for Desert Bighorn Sheep, Gila Monsters, Desert Tortoises, Rocky Mountain Elk, Mule Deer, various kinds of flora & fauna- and many other species of concern. I will discuss in depth, how these designation’s honors America’s “first citizens” that are indigenous to the S. Nevada region; by acknowledging their ancestral landscape and by also protecting the indigenous knowledge systems associated with these spaces & The contemporary identity that defines the heritage of the Moapa Band of Paiute Indians, and the Las Vegas Paiute Tribe.

We will see you there!

Every first Thursday of the month, Friends of Nevada Wilderness hosts a local environmental expert at REI Boca Park in their Community Room. Doors open at 6:45 giving you enough time to socialize and grab a snack before the presentation begins at 7 pm.

Please join us at REI Boca Park every first Thursday for a new speaker every month!