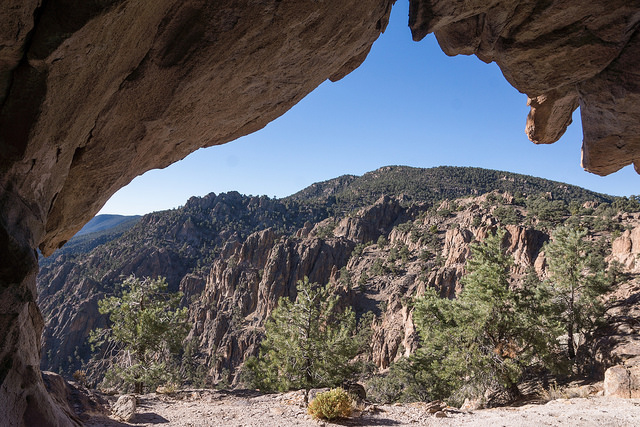 The Stone Cabin Hills unit is a remote parcel of land that rises from the flats of East Stone Cabin Valley. While formally labeled as a southeastern extrusion from the Monitor Range, these hills sit closer to the Hot Creek Range (to the east), but really belong to neither series of mountains. Although unnamed and not as tall as their neighbors, these hills are still a distinctive landmass with highpoints over 8000 feet. The LWC itself can be generalized as one long ridge running north-south, flanked by dramatic canyons and open valley flats.  Extensive pinion pine and juniper forest covers most of the range, and rugged terrain is plentiful.  While the southern portions of the LWC are more rolling, rhyolitic rock outcrops are still prevalent, punctuating the hills and basins.  This part of the range is tall and very densely forested, with bulky hills rising to the highest points along the main ridge.  Further north, the ridge transitions into an area of varied geology and topography, with white ash formations creating sharp peaks and twisted rock outcrops.  This part of the LWC is very scenic and very rugged, with steep sided mountains gradually losing height towards the northern extent of these lands.  In contrast, the south and west sides of the LWC are dominated by a broad expanse of sagebrush and valley flats.  The mountains rise from Stone Cabin Valley, which sits around 6000 feet and is full of spectacular washes, alluvial fans, and sweeping vistas.  The eastern side of the LWC is also relatively flat, at least compared to the area’s core.  Large washes flow through a small valley, which drains northward towards Hot Creek Canyon.  Small foothills dot the landscape, and are sparsely forested in a beautiful natural display.  Overall, this is a small but spectacular LWC, with varied landscapes and dramatic scenery.

Boundaries for this unit are relatively straightforward, following a series of vehicle routes which isolate these mountains in a nearly perfect fashion.  The eastern boundary is the most notable, following a major road south from Hot Creek Canyon.  This road is in very good condition and is a large graded dirt route.  It climbs from Hot Creek Canyon south to McIntyre Summit, then heads into East Stone Cabin Valley.  The southern boundary meets this route along the valley floor, and cuts west across the valley for a few miles.  The southern boundary also follows a vehicle route, but is in much worse condition.  The western boundary of this LWC ties in along the floor of West Stone Cabin Valley near Willow Creek.  This boundary route follows another road north across the valley, eventually meeting a fence line route which also sees traffic.  This boundary travels northeast up into the hills and the road becomes very rough. The northern boundary continues to follow this route, crossing Eagle Pass, and dropping back towards Hot Creek Canyon.  This portion of the boundary is extremely overgrown, washed out in places, and nearly impassable for vehicles.  In places the proper direction of travel is unclear, and the route is not recognizable.  It is highly plausible that this route will disappear with a few more years, and the hills north of the LWC could be incorporated into the area.

Overall, human intrusions and development are minimal throughout these lands, and the area’s naturalness quickly becomes apparent to those who visit.  Although there are a couple vehicle routes that intrude the area from the north and east, these are very minor and see little use.  Dense forest covers much of this landscape, and also helps to hide these routes and any other blemishes from past use.  This forest also provides immense solitude and incredible isolation.  Just a few feet into these woods, and one feels completely alone.  It would be very easy to become disoriented or even lost within the area, but relatively straightforward topography helps mitigate such issues.  The only other disturbances here are the boundary routes, which have been noted as being highly visible from within the LWC.  This is only true from a few of the highest and most exposed peaks, where surrounding views are expansive and breathtaking.  Even though the boundary routes are visible, this has little impact on the opportunities for solitude here.  These routes see little traffic, and are rarely used.  One feels completely alone, and can revel in the idea that the nearest humans are miles away on the valley floor.  Regardless, these large roads aren’t visible from the majority of this LWC, as views are obstructed by dense forest.  This provides outstanding solitude, natural beauty, and an almost pressing feeling of remoteness.

Wildlife is plentiful throughout the LWC, including most animals which commonly roam the Great Basin.  Antelope can be spotted throughout the foothills and flats, both solitary and in larger herds.  Mule deer hide throughout the hills, and the rocky terrain of this region could provide a habitat for desert bighorn.  In addition, this area is certainly home to predators, including bobcats, coyotes, and the elusive mountain lion.  Rugged terrain creates an excellent habitat for such creatures, providing numerous small shelters and caves which are likely used as dens.  The area’s undisturbed forest would provide plenty of shelter and an escape for these wild beasts as well.  The LWC is also full of numerous birds, reptiles, and rodents.  These can be spotted throughout the hills, and are often difficult to identify due to distance or quick encounters.  Still, many cliffs and rocks provide nesting grounds for large predatory birds, and an excellent habitat for snakes and lizards.  Jackrabbits and cottontails, a fixture in the great basin, are also prevalent here.  This is an excellent and relatively undisturbed natural habitat for many wild creatures.

There are many opportunities for recreation within this LWC, with interesting topography creating unique destinations and exploration to be had.  These mountains offer plenty of terrain for hiking and adventuring, numerous scenic vistas, and pleasant spots for camping or just day trips.  One could potentially wander the forest looking for wildlife, hike the entire crest of the mountains, or climb craggy peaks.  Some of the area’s lower elevations would also be well suited for horseback riding and horsepacking, with similarly pleasant routes and wide open terrain.  On the opposite end of the spectrum, the northern part of the area contains many interesting rock formations, spires, cliffs, and rugged topography.  Although the rock is a little bit loose, opportunities for scrambling and climbing are excellent, with several unique towers and summits providing reasonable goals.  Other recreation opportunities here could include hunting, bird watching, wildlife viewing, photography, rock hounding, and star gazing.

Overall, this in an interesting area located in a highly ambiguous part of the state.  While the LWC is relatively small, and very unassuming on a map, it is anything but in person.  Tall and dramatic peaks rise above the surrounding washes, dense forest covers the hills, and one could get lost exploring this vast and desolate area.  These hills provide outstanding opportunities for recreation and solitude, and are a fantastically natural part of the Silver State.