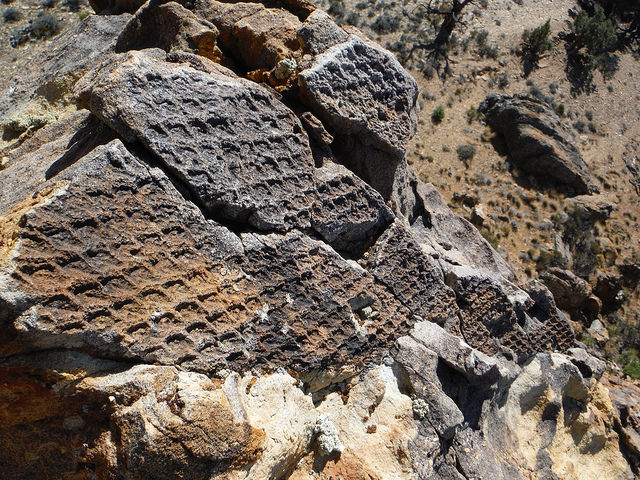 After leaving Pancake North we headed to Pancake South. We quickly saw this was going to be an entirely different type of Pancake. The rolling hills of Pancake North changed into a jagged mountain range with significant rock formations and high elevation peaks.  Aside from the elevation and jaggedness of the landscape the other very notable difference of Pancake South was its vegetation. In contrast to Pancake North, which had only small brush, Pancake South featured some of the largest Pinion and Juniper Pines we had seen in Nevada. These pines live in dense patches near the base of the range and continue up towards the summit eventually thinning out at the upper elevations. Pancake South also had a number of active springs, which probably had a part in the area seeing more use, at least historically, than Pancake North.

Another interesting feature of this area was its red rock formations that lay at the base of the mountains. The large spires reaching up over a hundred feet in the air were just asking to be climbed.  While the rock was loose, climbing them was not too intimidating or difficult. On the way up the formation a large raven flew out of a small cave in the rock and glided out into the distance until it could no longer be seen. Once on top the views were spectacular, especially looking out over the flat valley below. These spires definitely added to the magical nature of this area for me.

When I come back to this area again it will be either to hike in summer or ski in winter. It has the type of landscape that makes you want to get lost and not go back to society for a week or two. The valley to the West of Pancake South is completely void of light at night, which really adds to the feeling of solitude when camping. There are also a number of interesting historical sites like old cabins that would be neat to check out in further detail. I will definitely be returning to soon with a little more gear and a nice camera.