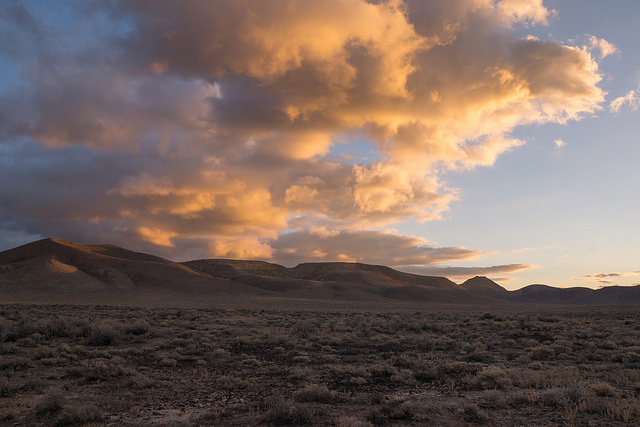 This area of the Fish Creek Mountains, is composed of mesas and volcanic tablelands, with deep canyons cutting through the landscape. Bubbled volcanic ash formations dot the hillsides, and several extinct cinder cones rise from the valley flats in a captivating display. These horseshoe shaped hills are silent today, but stand as evidence to this region’s volatile past. Near these volcanoes, the northwestern portion of the Unit is a mishmash of rock, with folded hills standing tall above the Buffalo Valley. Several deep canyons drain this area as well, cutting through the mountains and originating from the Unit’s central tablelands. This plateau rises high above the unit’s northern extents to an elevation over 6900 feet, terminating in dramatic cliffs that dominate the landscape.

Pinnacle Mountain, for which the unit is named is a large block of rock, detached from the neighboring cliffs. Sagebrush is most common throughout these lands and can be found in conjunction with rabbit brush, great basin wild rye, and other native grasses spread throughout the area. These plants seem to thrive at all elevations. Sagebrush heights of over six feet are standard within Daisy Creek Canyon, with many approaching 10-12 feet

The central plateau supports a robust juniper forest. This central highlands composes much of the unit’s core, and is guarded by steep hillsides and cliffs. Here the mountains are wild and rarely visited by humans, with powerful natural forces shaping the landscape. Widely scattered springs can be found in the core of this unit. Enormous boulders sit at the bottom of cliffs, and large washes, which cut through the hills. The power of erosion is ever-present in this desert ecosystem, and landscape has an untamed feel.

Mule deer call these mountains home, keeping a low profile within the juniper forested hills, or wandering through the rolling desert. The rocky nature of this unit, including very rugged terrain and deep canyons along its northwestern side, would makes this unit a good habitat for bighorn sheep.

The rugged landscape of the mountains in the central core creates a maze of rock and canyons, which invites exploration and creates an escape from the outside world. Many of these canyons are rarely visited, expansive, and hauntingly desolate. One could wander through this region for days without signs of another person. In addition, pristine juniper forest throughout the unit’s central core helps to enhance feelings of isolation, and allows for many secluded spots. This portion of the area would be excellent to camp or hang out in, with very little chance of being disturbed. The large plateau that composes this part of the unit creates an isolated area that is difficult to access but rewarding for those who do.

The southern portion of the unit, adjacent to Fish Creek is characterized by precipitous cliffs dissected by deep, narrow zig-zagging canyons searching for the valley floor. Each of these side canyons provides many outstanding opportunities for solitude and finding isolated spots. The southeast section of the unit harbors numerous secluded spots in the convoluted and dissected desert hills that characterize this rugged terrain. These elements combine to create outstanding opportunities for visitors to find virtually an unlimited number of isolated spots. Many visitors could enjoy these lands simultaneously, with no impact on the experience of one another.