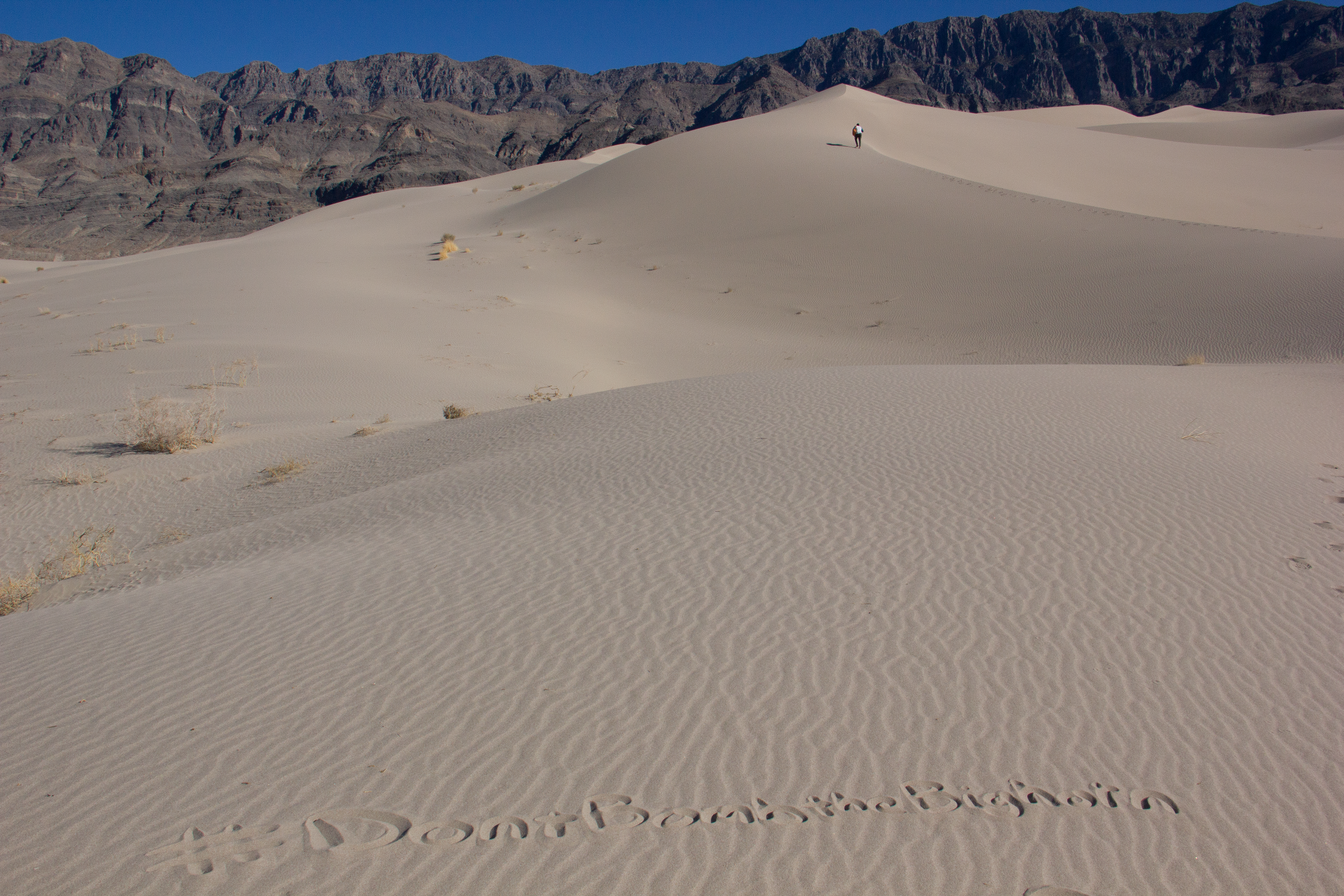 Now that the Air Force has released its LEIS (Legislative Environmental Impact Study) for their proposed land withdrawal from the Desert Refuge, there are a lot of unanswered questions. For those among us that had the time to thumb through the over 2,000-page proposal, one thing was made clear: The military is looking to gut the Desert National Wildlife Refuge of an additional 300,000 acres and destroy proposed Wilderness, unique habitat, and wildlife along the way. Why? We will try to explain.

What is the Desert National Wildlife Refuge (DNWR)?

The Desert National Wildlife Refuge is a wildlife refuge located in Southern Nevada approximately 25 miles northwest of downtown Las Vegas. Created in 1936 to provide habitat and protection for desert bighorn sheep, the Desert Refuge is the largest wildlife refuge outside of Alaska. At 1.6 million acres (643,000 hectares), the refuge can cover Rhode Island twice - and still have enough room left over for a quarter of a million football fields. However, over half of the Desert Refuge is not currently accessible as the Nevada Testing and Training Range does not allow public entry to this portion. Currently, the Air Force has proposed to erase another 300,000 from public access and add it to their monstrous 2.9 million acre Nevada Testing and Training Range (NTTR).

What is a Land Withdrawal?

The Air Force is seeking a land withdrawal from the Desert National Wildlife Refuge. Just like a withdrawal from a bank account takes out money from an account, a land withdrawal would take away land from a certain area and repurpose it. In this case, the Desert Refuge loses land to the Nevada Test and Training Range, again. This process would cut off access for thousands of recreationists and researchers that use the Refuge for many different purposes including hiking, camping, hunting,  backpacking, birding, jeeping, fishing, and scientific research.

What Areas Will Be Potentially Lost?

Over 300,000 acres of the Desert National Wildlife Refuge will be lost if this withdrawal is approved, with the majority of land being lost in the northeast portion of the Desert Refuge (227,000 acres). This cross-section is a critical area for several reasons. This portion of the Desert Refuge includes the Broader Sheep Range Proposed Wilderness, which is home to the largest group of desert bighorn sheep, Nevada's state animal. Historic Alamo Road has served as a byway between Alamo and the Las Vegas area for well over 100 years. This trail was used by settlers and runs through the proposed withdrawal area listed in the LEIS as Alternative 3C. Sadly, we will have to say goodbye to a piece of Nevada history if this withdrawal is allowed. Alamo Road would be lost and all of the treasures that lie along this rugged dirt road including petroglyphs, historic ranching corrals, ancient agave roasting pits, dry lakes and pristine sand dunes. Alamo Road also connects the Desert Refuge with the lakes and marshes of Pahranagat National Wildlife Refuge, her neighbor to the north. Figure ES-4 below from the LEIS Executive Summary (ES-10) provides a visual of the areas at risk of being opened up to bombing and training exercises. 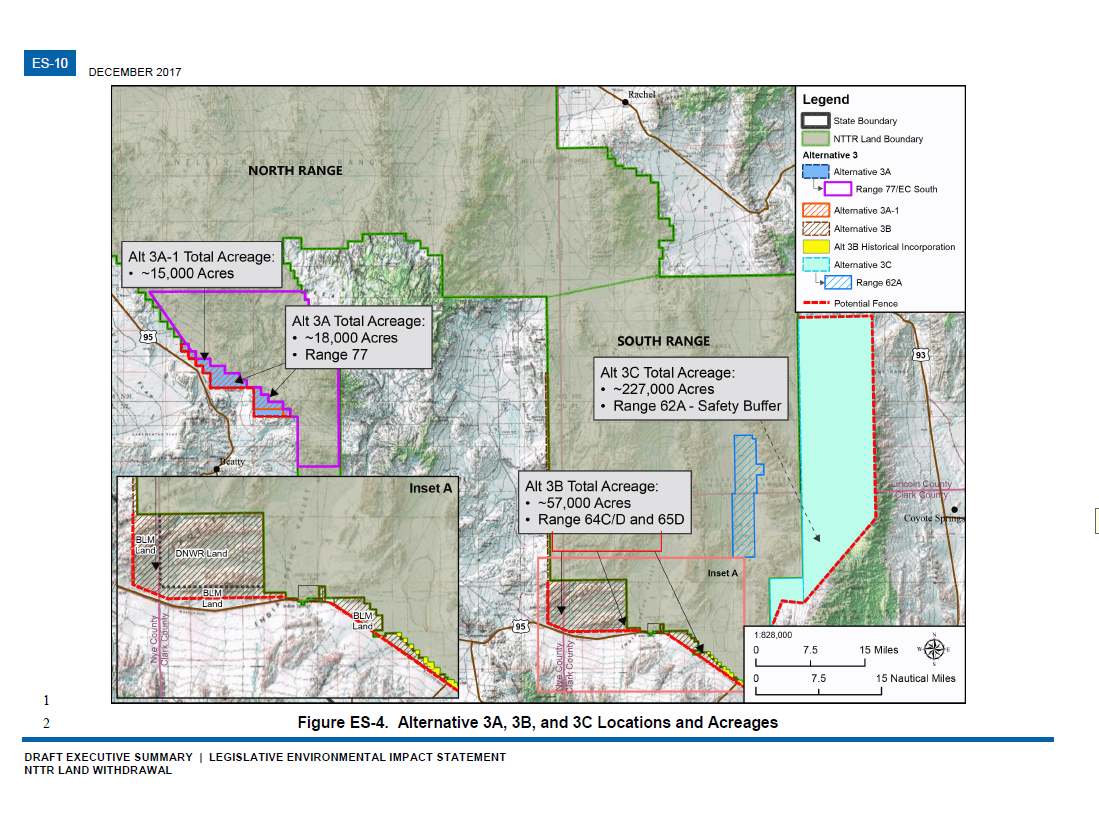 Why is the Air Force seeking this land?

The Air Force is citing "congestion, range constraints, and the ability to properly test and train" as reasons to why they would like to expand. Currently the Nevada Testing and Training Range is 4,351 square miles. For many, it is difficult to understand how additional land is needed at the cost of public land owners and wildlife who call the Desert National Wildlife Refuge home. The Air Force is also looking build roads to install several threat emitters within the Desert Refuge and construct runways on a dry lake destroying the natural landscape that makes the Desert National Wildlife Refuge such a unique place. These emitters are erected to simulate real-time situations for pilots but come at the cost of irrevocably damaging areas previously managed as Wilderness and displacing wildlife like the bighorn sheep. The Desert Refuge is currently the largest roadless area in the Nevada. But if the Air Force gets its way, this pristine piece of American history could be soon destroyed.

What are the potential environmental and economic damages?

According to language listed in the LEIS, areas currently managed as Wilderness will be no longer managed as Wilderness. This change in land management "may significantly depart from the existing visual context of an 'untrammeled' natural environment free of human modification, as well as introduce new lighting sources that could permanently affect the natural night skies through the creation of light pollution and sky glow", as explained in the LEIS Executive Summary. With additional fencing and structures, desert bighorn habitat and territory will be ultimately fragmented. This fragmentation can lead to limits in genetic diversity and isolation of desert bighorn population which, over time, can lead to population decline. Local bighorn enthusiasts have been working with Nevada Department of Wildlife installing guzzlers, artificial water installments designed to provide wildlife with community sustaining water, throughout the Desert National Wildlife Refuge. Unfortunately, access to monitor and maintain these life-giving guzzlers could be potentially lost or rendered difficult to reach at best. Millions of dollars in annual recreation revenue spent by Desert Refuge visitors will be lost if the land withdrawal goes through. The town of Beatty, which has seen an uptick in tourism after the installment of several mountain bike trails, could lose out big in this deal as well. Tourism is the lifeblood of the state of Nevada. And tourism through recreation is a resource a diverse group of entrepreneurs can benefit from. Outfitters, hotel, gas, photography guides, retailers and licensing bureaus all have a stake in the fate of the Desert Refuge.

What can I do to prevent this from happening?

From the moment the LEIS was released, December 8, 2017 until March 8, 2018, there is an 90-day open comment period. The public is encouraged to provide feedback and reactions to the LEIS draft and these comments will be included in the final draft of the LEIS. Comments can be submitted here. Those wishing to submit comments are encouraged to list your specific concerns as to why this proposal should not be considered or approved and why. Getting involved by submitting comments is a great way to make an impact on limited time and mobility resources. There are also public hearings taking place all month as well for those who can make the meetings. Locations as well as dates and times are as follows:

Friends of Nevada Wilderness will be participating in the Las Vegas public hearing at the Aliante Casino & Hotel on January 23, 2018. We will be greeting #DontBombTheBighorn supporters with a rally and press conference before the hearing. In the meantime, there is a petition circulating for our Nevada elected officials to consider. If you have not signed yet, you can do so here. Be sure to post on social media using the hashtag #DontBombTheBighorn. During this campaign, awareness is our biggest ally against this unwanted land withdrawal. As concerned citizens and public land advocates, it is up to us to make sure the right thing is done in Southern Nevada.

Stand with us as we Save the Desert National Wildlife Refuge! We appreciate your support.

You can RSVP for the January 23rd public hearing on our website here.