Rally ‘Round Our Public Lands

Concern is mounting after President Donald Trump’s Executive Order to review all National Monuments designated after January 1st 1996. This review includes Nevada's Gold Butte and Basin and Range National Monuments. Following the Executive Order, the Department of the Interior opened a comment period to invite the public to weigh in on these 27 national monuments under review. Interior Secretary Ryan Zinke is tasked with reviewing these comments, visiting with local government officials and other stakeholders, and touring the national monument lands. This past week, Secretary Zinke visited Nevada - not to meet with local stakeholders but to hold a closed door meeting in Lake Tahoe and a press only event in Pahrump. Nevadans showed up at both events to let him know that we love our public lands and National Monuments! 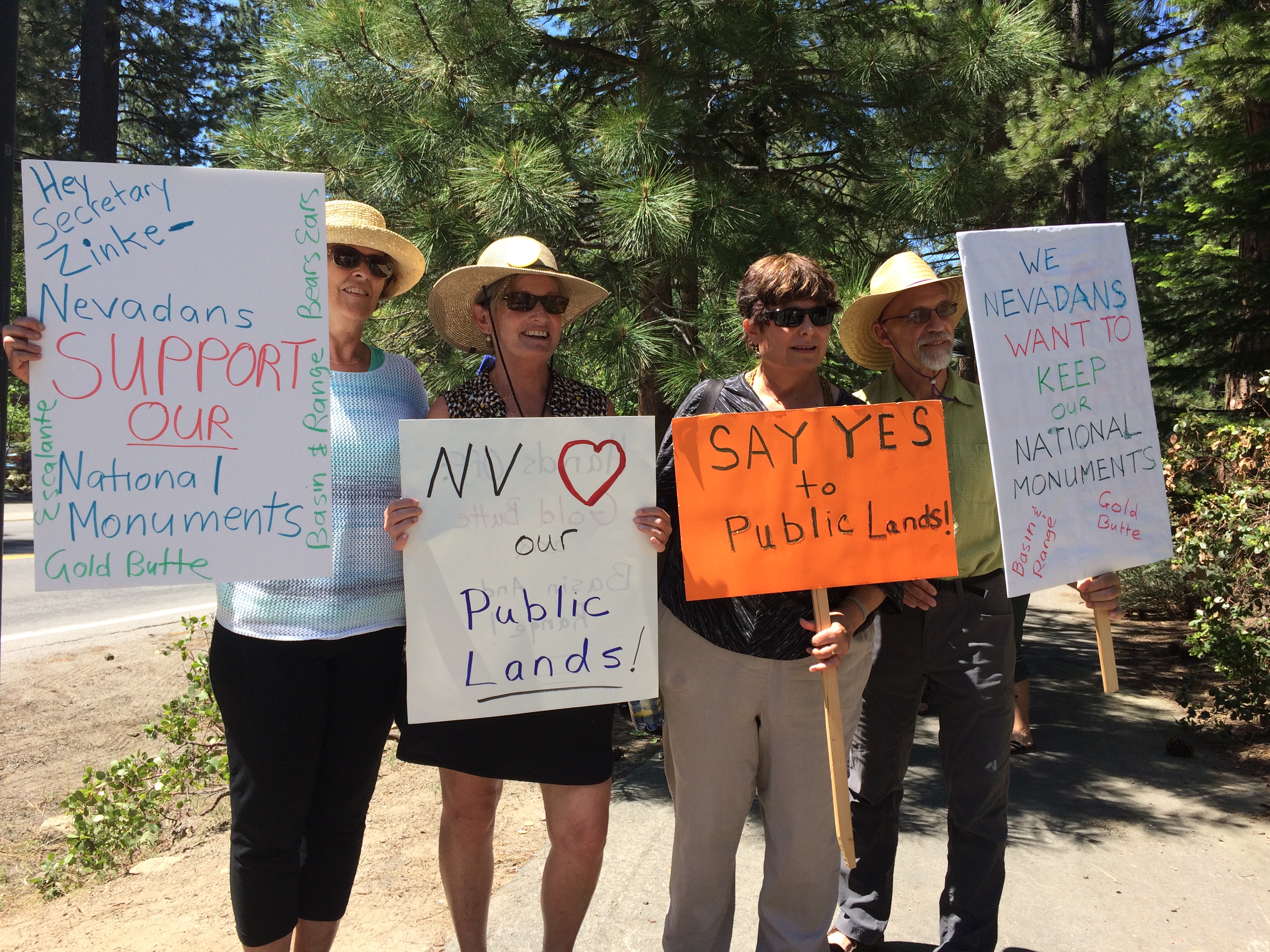 Dozens of public land advocates across the state demonstrated their strong support for
Nevada's national monuments!

On Sunday, Secretary Ryan Zinke attended a closed door meeting (even to the media) at the Hyatt Regency in Incline Village (Lake Tahoe). At a moment's notice, a passionate group of public land defenders rallied to make their presence known in front of the Hyatt hotel. With signs that proclaimed their love of Gold Butte and Basin and Range and chants to "save our public lands," these Nevadans made it clear that our state loves our national monuments!

That following Monday, June 26th, Secretary Zinke met with Lincoln and Nye County Commissioners in Pahrump Nevada to sign the Department of Interior's official letter to release PILT funding for the counties. The event was followed by questions from the press, most of them centered on the national monument review and when the Secretary will be back in Nevada to meet with additional stakeholders since most of his Nevada engagements this time around did not include several stakeholders, most notably local Native American tribes, for input.

In light of being snubbed by the new Secretary, local Las Vegas conservation and public land advocates called a press conference to let their collective voice be heard. The event was hosted at the Battle Born Progress and Nevada Conservation League office. Local artist and Las Vegas Paiute tribe member, Fawn Douglas, set the tone for the conference with an inspirational opening statement. The mood was optimistically defiant with speakers focusing on moving forward as a collective.

All aspects of the community were represented with a diverse group echoing a unified message to Interior Secretary Zinke in support of Nevada's national monuments. Eric Roberts, a representative from local Las Vegas business SH Architecture, spoke on the importance of outdoor recreation as a major draw for attracting quality hires. With Gold Butte National Monument less than two hours outside of the city, it makes sense why protecting this landscape is something that groups of young professionals would be interested in. Darren Daboda, Tribal Council Chair for the Moapa Band of Paiutes, Jaina Moan of Friends of Gold Butte and many more also weighed in on the importance of protecting Nevada's National Monuments.

In case you missed it in person or didn't get a chance to view the live stream, you can watch the press conference by clicking here.

Secretary Ryan Zinke said he will be back in July regarding the national monuments under review here in our state. We will continue to urge the Secretary to meet with all stakeholders and to see for himself the beauty and grandeur of these landscapes that a monument designation protects.

Don't forget to let your voice be heard by sending your comment to Interior Secretary Zinke urging him to keep Nevada's national monuments intact. The comment period ends July 10th. Let's tell Washington how much Nevada loves our National Monuments and to keep their hands off our public lands! #MonumentsForAll