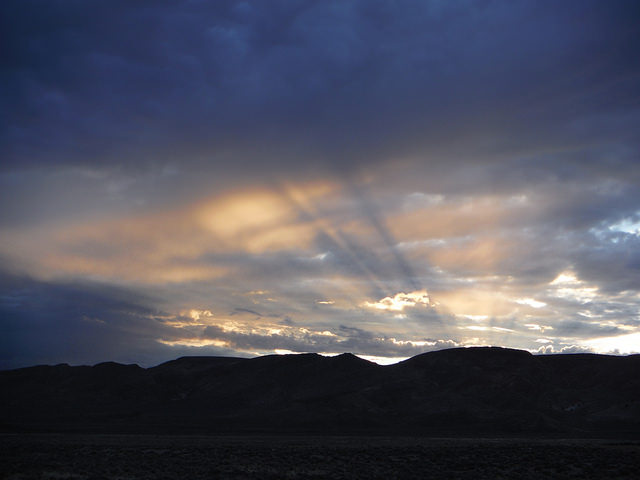 Most of the unit is incredibly dry and has low vegetation, but also has relatively tall mountains. And while these peaks and hills are volcanic in nature, they do not form the expansive mesas seen to the south. Instead, these hills are steep sided and rise to dramatic points which stand high above the surrounding desert flats. The mountains within this unit tower above to over 2000 feet above Big Sand Springs Valley to the west. Craggy volcanic hills fall away on all sides, with alluvial deposits, large washes, and barren flats marking the extents of this area. The western side of the unit is very sharp, with deep gullies and many cliffs punctuating the landscape. The western part of the area also contains the unit’s highest point, an unnamed mountain standing 8039 feet tall.

The harsh winds of the desert have played a large role in shaping this landscape, and continue to do so. Hardy vegetation covers the hills, withstanding the dust and powerful winds. What little water falls quickly erodes the exposed hillsides, leaving plenty of rock and a barren landscape. . Sagebrush is most prevalent across this region, carpeting the lands with a grey green hue. The most notable plant is a large serviceberry bush, resembling a small tree, which stands out within this desolate region. This bush clings to water within a small draw on the northeastern side of the unit, where an intermittent spring may occasionally flow. Its anomalous size can be easily spotted for many miles.

A few hardy desert animals survive in this harsh climate. These beasts are typical to the great basin, and are likely able to survive in many different environments. Small rodents and reptiles are most common, including jackrabbits, mice, lizards, and snakes. Larger mammals also live here, with antelope and mule deer occasionally seen roaming the hills, and coyotes heard in the evening and at night. The rocky hills of this unit also provide excellent wet-season, transitional habitat for bighorn sheep. A variety of birds exist here as well, including both sage birds and larger predators. Golden eagles, hawks, and other majestic birds can be spotted circling high above the lands, searching for a meal.

Overall, these lands contain few human intrusions. Those that do exist are generally faint and minor, seeing little use. The remote nature of this LWC, combined with a lack of human use, has allowed many of these disturbances to fade into the desert landscape. This is a testament to the pristine nature of this area, and the power these natural forces.

The core of the unit consists of a rugged and rocky spine of the Pancake Range dissected by competing drainage courses. This creates a labyrinth of washes and canyons twisting and turning in unexpected directions. Silence is pressing throughout the lands, and the wind blows in a haunting fashion. This is the kind of place that outlaws would hide in, evading capture for weeks or months at time. One could wander this landscape for days without signs of other humans.

The unit is dry and devoid of permanent water. The one spring within the unit appears to be decades dry. Primitive recreation users face the additional challenge of carrying their own water and planning multiple day trips with conservation of every drop of this precious resource in mind.

The unit is rich with volcanic geologic formations. Colorful, older rhyolitic formations in the northern part of the unit and small outcrops of red rock on the eastern alluvial combine with several isolated patches of ash and lava from the more recent volcanic activity in the adjacent Lunar Crater testify to the fiery nature of this unit. Careful examination of the unit will reveal remnants of the sedimentary rocks that comprised this region long before the volcanic epoch. These resources provide outstanding opportunities for geologic sightseeing.