Vast stretches of land in rural northwest Nevada will be preserved if Congress can finally pass legislation that would protect wilderness in Pershing County while encouraging economic development.

A version of the Pershing County Economic Development and Conservation Act easily passed in the House of Representatives in 2018, but a revised bill has stalled.

Bart Kohler, a Nevada wilderness advocate, spent many years working with ranchers in Pershing County to achieve a mutually acceptable wilderness proposal that would protect lands and avoid undue conflict.

"Wilderness is not a Democratic Party issue and it's not a Republican Party issue," Kohler said. "It's an American issue, and as a longtime conservation leader once said, 'God bless America. Let's save more of her.' "

Seventy-five percent of Pershing County is public land owned by the federal government, and much of its checkerboard pattern hinders the county's ability to expand economically.

The legislation would allow exchanges of public and private land within the area.

Debra Struhsacker, a former vice president of the Pershing Gold Corporation, said the comprehensive bill was developed in "roll-up-your-sleeves" sessions with a broad range of participants.

She said it would conserve areas of wilderness that have been in limbo for more than 30 years while also benefiting consumers in Pershing County.

"I believe this stakeholder-drive approach to land management that includes wilderness preservation as well as some economic development is a real win-win for all interests," Struhsacker said,

The bill would ensure the permanent protection of about 140,000 acres of wilderness in the northwest part of the Great Basin Desert.

Kohler said the American landscape still has places in the West, including "unknown jewels" in Nevada, that people want protected for future generations.

"Most people in the United States probably drive on the interstate," Kohler said. "But if you get off the main interstates, you'll be surprised on how stunning and how amazing that country can be."

Support for this reporting was provided by The Pew Charitable Trusts. 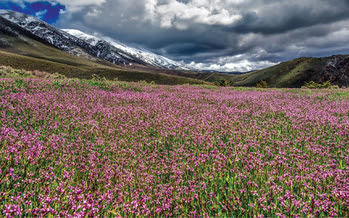 Wildflowers bloom in the valley of the Tobin Range Wilderness Study Area, which would become the Grandfathers' Wilderness after the bill is signed into law.