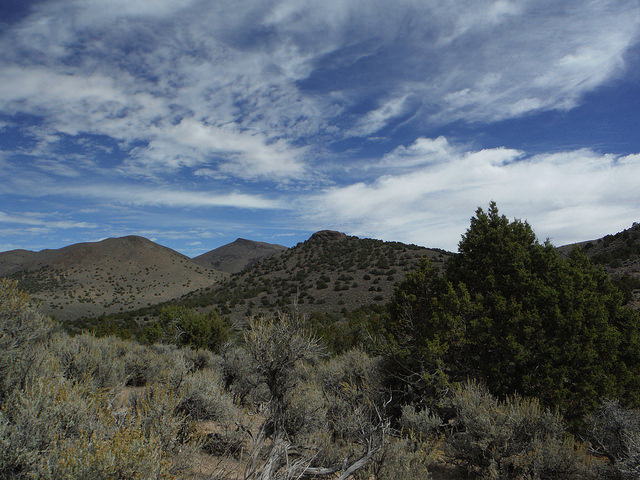 Located within the southern extent of the Shoshone Range, this LWC is composed of rolling hills and forested terrain. While there are no actual cedars, the hills are covered with a dense and beautiful juniper forest. The tallest peaks within the area sit along an eastern crest, and reach elevations just over 7000 feet. From these high vantages, sweeping views stretch out across the surrounding desert. Large alluvial fans drain from the high hills, and spread out across the flat valley floor.

Enormous sagebrush can be found growing along the washes and canyon bottoms, more closely resembling the local juniper trees than their smaller sagebrush counterparts on the mountain slopes. In places like Wood Canyon, and some of the other more dramatic drainages, natural forces dominate the landscape. Evidence of flooding, rock fall, and other powerful erosive events are highly obvious.

These pristine hills are also a habitat for many wild creatures who call these lands home. Thick forest and rolling terrain create a landscape that is welcoming to many animals, and countless wild beasts live within these mountains At night, the howling of coyotes is pervasive throughout the area, giving clues to the health of the local population. This area also supports a large number of wild horses, which seem to frequent the Horseshoe Basin. These lands are a beautiful example of Great Basin foothills, and a relatively undisturbed habitat for many animals.

Within the core of the unit, thick forest enhances ones solitude and these lands feel isolated from the outside world. Rolling hills and rugged topography also help to separate visitors from each other and from the surrounding landscape. The region is mostly silent apart from the wind in the trees, or occasional birdsong. Visitors are unlikely to have company within this area, apart from the wild beasts that inhabit the lands. Time also seems to slow down, and the cares of modern society are easily forgotten. This is a primeval place, dominated by natural forces and rich in beauty. This is a lush escape within the arid desert, thick with forest and opportunities to find a multitude of isolated spots. Within this unit, the outside world seems incredibly distant, and the encumbrances of society are no more. This area is not easy to explore, however, nearly every inch of this unit is accessible to the visitor with the determination and skills to traverse trackless wilderness.